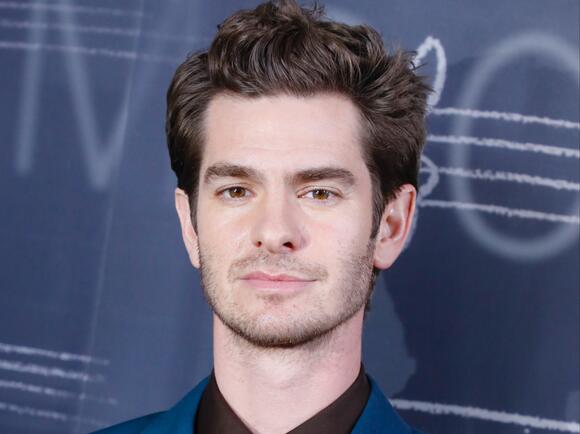 Andrew Garfield has opened up about the loss of his mother and it has moved us all to tears.

The 38-year-old actor appeared on The Late Show with Stephen Colbert for the release of his new film Tick, Tick… Boom!

The film is an adaption of the acclaimed musical by composer Jonathon Larson, and is a semi-biographical story that follows an aspiring composer called Jon as he aims to make it in New York.

Tick, Tick, Boom!, directed by Lin-Manuel Miranda, stars Garfield as Jon and the actor described being a part of the project as a method of healing.

Garfield lost his mother, Lynn Garfield, in 2019 following a battle with pancreatic cancer. The actor opened up on the talk show about his grief.

He prefaced his mentioning of his mother by saying: “I love talking about her, by the way, so if I cry, it’s only a beautiful thing.”

He continued: “This is all the unexpressed love, the grief that will remain with us until we pass because we never get enough time with each other, no matter if someone lives until 60, 15, or 99.

Garfield compared Larson – who passed away at aged 35 on the night of the preview of his show Rent meaning he never got to see the success of his hit musicals – to his mother.

He then thanked Carson for letting him speak about his experiences, in the presence of his father, and most likely left not one dry eye in the room.

Fans of Garfield have left glowing reviews of his performance as Jon in Tick, Tick... Boom! and shared their touching reactions to his emotional explanation of his grief.

Tick, Tick... Boom! is available to watch on Netflix now.

Andrew Garfield Breaks Silence on Why He Returned for Spider-Man: No Way Home

Despite spending several interviews trying to convince fans that he "hadn't gotten a call" from Marvel and Sony, Andrew Garfield finally got his chance to return as Peter Parker in Spider-Man: No Way Home. Garfield's original tenure as the web-slinging hero was unceremoniously cut short after just two movies, as the lackluster reviews for The Amazing Spider-Man 2 and success of the MCU led Sony to pursue a creative partnership with Marvel Studios. More than seven years after he last played Spider-Man, Garfield took the opportunity to try again and bring some more depth to the role he never got to finish. He's now opening up about why he made the decision to don the mask once more in No Way Home.
MOVIES・12 DAYS AGO
Deadline

Andrew Garfield scored a SAG nomination for Outstanding Performance by a Male Actor in a Leading Role for the Netflix film tick, tick…BOOM! In the film Garfield plays Jon, a young theater composer who’s waiting tables at a New York City diner in 1990 while writing what he hopes will be the next great American musical.  Waking up early in the morning with his dog in tow to talk to Deadline about his nomination, Garfield got candid about portraying the late Rent composer Jonathan Larson and showing respect to his legacy. This experience and acknowledgement by his peers isn’t something the...
MOVIES・6 DAYS AGO
celebritypage.com

Eleven years after the release of the blockbuster film the Social Network, stars Andrew Garfield and Dakota Johnson have reunited to talk about their upcoming projects. Johnson has been working alongside Maggie Gyllenhaal on her directorial debut, the Lost Daughter. She heralds Gyllenhaal as an actor's director---someone who knows what it's like to be vulnerable, who dedicates herself to creating a safe space for the women on set to allow themselves to be open.
CELEBRITIES・8 HOURS AGO
IndieWire

With “Spider-Man: No Way Home” continuing to delight audiences, former Peter Parker and fan favorite of the new movie, Andrew Garfield, is still admitting to the great lengths he went to in order to keep his participation a secret. Garfield has been candid about having to lie to people about whether he was going to appear in the new film or not, calling it “thrilling.” Now, we’re hearing that he event went so far as to lie to former directors and co-stars. While speaking on the Happy. Sad. Confused podcast Garfield discussed that he even lied to “Spider-Man” director Marc Webb...
MOVIES・1 DAY AGO

This post contains spoilers for Spider-Man: No Way Home. Since Andrew Garfield‘s appearance in the third installment of Tom Holland‘s Spider-Man franchise, fans across the internet have been keen on seeing Garfield reprise his role for a The Amazing Spider-Man 3. Spider-Man: No Way Home saw not only Garfield but the original web slinger Tobey Maguire reprise their respective Peter Parker roles alongside Holland. In a recent interview with Variety Garfield responded to the question of whether or not he would be open to returning to the character,
MOVIES・11 DAYS AGO
Cinema Blend

Warning: Spoilers for Spider-Man: Now Way Home lie ahead. Spider-Man: No Way Home has completely dominated the box office, to say the least. Fans were delighted by the fact that it brings back villains from the older Spider-Man movies as well as former Spider-Men Tobey Maguire and Andrew Garfield. Garfield was a true standout, and seeing his version of Peter Parker get his due, after starring in two polarizing movies, was nothing short of incredible. Of course, one thing about him and his fellow Peter Parkers is that their costumes are all distinct from one another, prompting fans to debate which is the best. Interestingly, the stars had some thoughts on each other’s get-ups, and Tom Holland was apparently "jealous" of Garfield’s suit.
MOVIES・8 DAYS AGO
The Independent

Andrew Garfield reveals that he improvised Spider-Man: No Way Home’s most heartwarming line

Andrew Garfield has revealed he improvised one of the best moments in Spider-Man: No Way Home.The actor was long rumoured to have filmed an appearance for the blockbuster, which saw the re-introduction of old Spider-Man characters thanks to the Multiverse. Garfield continually batted away the speculation; however, fans were delighted to see the former web-slinger show up alongside Tobey Maguire’s version of the character.The actor discussed his appearance for the first time during an interview with Variety, in which he casually said that he was behind what is easily the film’s most touching lines.It occurs near the end of...
MOVIES・11 DAYS AGO
ComicBook

Andrew Garfield's love for his Spider-Man brethren is for real. The Tick, Tick...Boom! actor revealed during a recent interview that, with a cap down and his mask up, he managed to not only sneak into a screening of Spider-Man: No Way Home, but to do so with Tobey Maguire. That the pair were appearing in the film was simultaneously the worst-kept secret in Hollywood, and the most ardently kept, with Garfield repeatedly forced to deny his appearance in media appearances over the course of months. Apparently, before he could feel free to talk about it, he had to have a little fun.
MOVIES・11 DAYS AGO

Andrew Garfield is currently enjoying the record-breaking success of “Spider-Man: No Way Home,” which marks the third time the Oscar-nominated actor has played the web-slinger on the big screen. Had Garfield’s career gone has he intended, “Spider-Man” wouldn’t have been the only major Hollywood franchise under his belt. The actor recently told Entertainment Tonight that he was “desperate” to join Disney’s “Chronicles of Narnia” franchise as Prince Caspian when he was starting out in Hollywood, but the casting team allegedly thought Garfield just didn’t have the right look.
MOVIES・7 DAYS AGO
Den of Geek

Link Tank: Why Andrew Garfield was the MVP of 2021

Did any performer have a better year than Andrew Garfield in 2021?. “Exploring grief on a public platform can be cathartic, and Andrew Garfield has been sharing his as he’s promoted tick, tick…BOOM! Now, the Screen Actors Guild has nominated him for his work in bringing Jonathan Larson to life in the Lin-Manuel Miranda-directed musical, fresh from his Golden Globes win for the role. But his response to his nomination shows a profound understanding of everything that Jonathan Larson stood for, as well as the exploration of one’s own grief through art.”
CELEBRITIES・4 DAYS AGO
buzzfeednews.com

It's probably fair to say that Andrew Garfield can breathe a little easier now he no longer has to keep his role in No Way Home a secret — especially considering the lengths he went to in order to keep it under wraps!. The 38-year-old and his fellow Spider-Man...
CELEBRITIES・16 HOURS AGO
E! News

Andrew Garfield is filled with gratitude after being nominated for a SAG Award. The Tick, Tick... Boom star spoke to E! News about his nomination on Wednesday, Jan. 12 for his portrayal of late playwright Jonathan Larson. "This is the SAG Awards honoring him and his life and what he stood for," Andrew said, "how he lived his devotion to the art of theater and storytelling."
NEW YORK CITY, NY・6 DAYS AGO

Andrew Garfield reacted to being nominated for a SAG Award, revealing in a recent interview just how much it meant to him. Coming off his first win at the Golden Globes for Best Actor in a Comedy or Musical, Andrew found himself nominated again for his leading role in Tick, Tick... Boom! at the upcoming SAG Awards.
CELEBRITIES・5 DAYS AGO
extratv

LOL! Andrew Garfield Reveals Why His Ex, Emma Stone, Called Him a ‘Jerk’

During the "Happy Sad Confused" podcast, Andrew Garfield revealed it was Zendaya's idea to throw bread at him when he appeared in the movie.
MOVIES・5 HOURS AGO
E! News

Watch: Andrew Garfield Wants to Meet New "Spider-Man" Tom Holland. The werewolf is officially out of the bag. Following the release of Spider-Man: No Way Home, Andrew Garfield is finally free to talk about the joy he felt stepping back into Spider-Man's iconic red-and-blue suit and reprising his role as Peter Parker (aka Peter No. 3) alongside fellow Spider-Man alum Tobey Maguire and current Spider-Man Tom Holland.
MOVIES・11 DAYS AGO

‘The Bachelorette’: Michelle Dumps [SPOILER] After Telling Him She Was In Love

After falling in love with two different guys on season 18 of ‘The Bachelorette,’ Michelle Young could still only choose one, and the man who she dumped was absolutely devastated. Michelle Young and Brandon Jones had a devastating breakup during the finale of The Bachelorette. During fantasy suites,...
CELEBRITIES・28 DAYS AGO