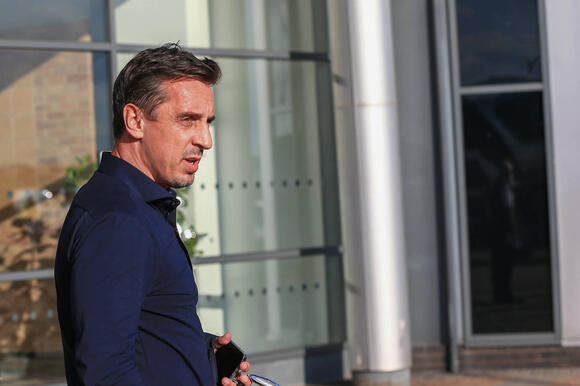 That's been the complete opposite for the red side of the city.

Manchester United hasn't managed to win a league title since the departure of Sir Alex Ferguson and have had to change their manager five times now with the recent departure of Ole Gunnar Solskjær.

It was that very topic that was the discussion of a recent episode of the Gary Neville podcast.

The former Manchester United right-back was forced to compare the dynasties local rivals City and Liverpool have built over the past few years, and how his old club can reach that level in the future.

"This feels like what would be ingrained success now, it's been so long; Mancini, Pellegrini, and Pep Guardiola have delivered success."

Even before the appointment of Pep Guardiola, Roberto Mancini and Manuel Pellegrini both delivered massive success for the club and were carefully selected by the club's hierarchy.

The planning and execution of major decision-making off-the-pitch is why City have enjoyed major on-the-pitch results over the past decade.

Just this week, Pep Guardiola had this to say about Txiki Begiristain - the club's Director of Football: "I met Txiki [Begiristain] a long time ago. He is very humble and a reason why I extended my contract at Manchester City. We met each other, played together for 30 years and he trusted me. Without him, I would not be here..."

There is no questioning the fact that Ilkay Gundogan has been one of the best players in the world for over 12 months now, putting in a string of consistent performances under Pep Guardiola. Ending up as Manchester City’s top scorer in the 2020/21 Premier League season with 13 goals,...
PREMIER LEAGUE・2 DAYS AGO
The Independent

Kevin De Bruyne scored a brilliant winner as Premier League leaders Manchester City moved 13 points clear with a 1-0 victory over second-placed Chelsea on Saturday.The Belgian playmaker, who had an unhappy spell at Chelsea early in his career, curled beyond Kepa Arrizabalaga from distance to settle a tight contest at the Etihad Stadium with 20 minutes remaining.It was a moment of magic worthy of winning any game but was the least City deserved having dominated against the side that beat them in last season’s Champions League final.Blue is the colour! 💙#ManCity pic.twitter.com/816nfRAo0M— Manchester City (@ManCity) January 15, 2022The win...
PREMIER LEAGUE・1 DAY AGO

Ralf Rangnick would prefer to keep both Dean Henderson and Donny van de Beek at Manchester United beyond the end of the January transfer window, despite their desire for regular first-team football.Neither Van de Beek or Henderson have started a Premier League game for United this season, having been left on the sidelines by former manager Ole Gunnar Solskjaer and his interim successor Rangnick.The pair have made their feelings known to the United manager but have so far failed to secure a move away from Old Trafford, with Rangnick reluctant to let either go.Rangnick is having to contend with a...
PREMIER LEAGUE・2 DAYS AGO
CityXtra

It is no secret that the bedrock of Manchester City's success in recent season has been the solid defence in front of Ederson. With the resurgence of John Stones, as well as the addition of Rúben Dias from Benfica for a reported fee of £62 million, Manchester City's rearguard has become arguably the most important part of the squad.
PREMIER LEAGUE・1 DAY AGO
CityXtra

The Sky Blues can go at least 11 points clear at the top of the pile should they manage to claim their second win of the campaign against the European champions after sealing a crucial win away at Stamford Bridge earlier this season. Pep Guardiola's men have been relentless in...
PREMIER LEAGUE・2 DAYS AGO
The Independent

Ralf Rangnick has no plans to replace Harry Maguire as Manchester United captain, despite Cristiano Ronaldo’s claim that the squad's mentality must improve to avoid a "nightmare" season.In an interview with television broadcasters this week, Ronaldo said that there needed to be a shift in attitude within the Old Trafford dressing room in order for results to improve.The five-time Ballon d'Or winner rejoined United from Juventus in August, having won eight major honours during his first spell at the club between 2003 and 2009, including three Premier League titles and the Champions League.Ronaldo has returned as the oldest outfield player...
PREMIER LEAGUE・2 DAYS AGO

Thomas Tuchel has admitted Chelsea’s Premier League title race could be over if the Blues lose at “benchmark” club Manchester City on Saturday.Chelsea trail Pep Guardiola’s City by 10 points heading into the weekend’s Etihad Stadium clash, with Andreas Christensen the Blues’ latest Covid-19 absentee.Chelsea toppled City 1-0 in Porto in May to win the Champions League but Blues boss Tuchel admitted Guardiola’s men are still the best in the business in England.City have won 11 Premier League matches on the spin, while second-placed Chelsea have only lost once in 15 but have also drawn six matches in that stint.Asked...
PREMIER LEAGUE・2 DAYS AGO
CityXtra

Manchester City can go at least 11 points clear at the top of the Premier League with a win over Thomas Tuchel's Chelsea side at the Etihad Stadium at the weekend, with Liverpool set to host Brentford on Sunday. On the eve of Manchester City’s FA Cup third-round tie against...
PREMIER LEAGUE・2 DAYS AGO
CityXtra

“Excellent in All Departments." - Pep Guardiola Heaps Praise on Thomas Tuchel Ahead of Man City's Clash With Chelsea

In September, Manchester City came, saw, and conquered Stamford Bridge with a statement 1-0 win - courtesy of a Gabriel Jesus winner. This time around, ahead of the Sky Blues clash against Chelsea at the Etihad Stadium on Saturday, the hosts have a sizeable 11 point gap over the visitors.
PREMIER LEAGUE・2 DAYS AGO
Absolute Chelsea

Chelsea boss Thomas Tuchel has hailed midfield duo N'Golo Kante and Mateo Kovacic ahead of the Blues' trip to the Etihad as they face Man City. The pair faced a spell on the sidelines this season, where Chelsea dropped points during the month of December to fall to within ten points of the league leaders.
PREMIER LEAGUE・1 DAY AGO
The Guardian

Just days after meeting in the FA Cup, Aston Villa and Manchester United face off again in the Premier League this afternoon. Ralf Rangnick’s side held on to a 1-0 victory in the third round tie after Scott McTominay scored the game’s only goal after just eight minutes. Cristiano Ronaldo was rested for the fixture but should return to the starting line-up, having publicly urged his teammates to correct their attitudes and strive for more in an interview with Sky Sports.Follow Aston Villa vs Manchester United LIVEMeanwhile, Villa have completed the signing of Lucas Digne from Everton as they back...
PREMIER LEAGUE・1 DAY AGO
CityXtra

Ilkay Gundogan has made his name as one of the best midfielders of the modern generation after a trophy-laden spell at the Etihad Stadium since becoming Pep Guardiola's first capture at Manchester City in the summer of 2016. From bursting onto the scene with Borussia Dortmund to taking his game...
PREMIER LEAGUE・2 DAYS AGO