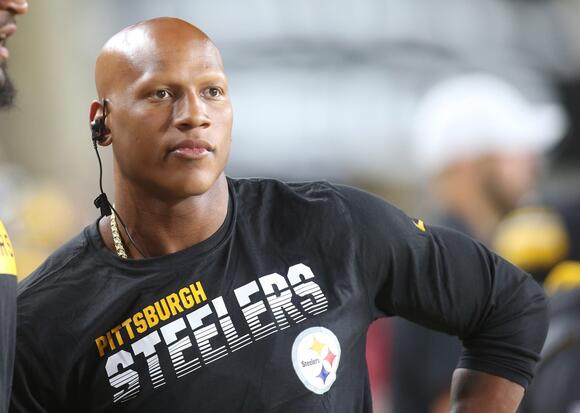 It was strange seeing a players wearing #50 on the field for the Steelers on Sunday and it really bothered at least one person.

Pittsburgh Steelers linebacker Delontae Scott may have only played seven snaps on Sunday when the Steelers took on the Los Angeles Chargers, but he caught the attention of Vernon Shazier, the father of former linebacker Ryan Shazier.

He asked, using emoji, that people pray for him.

He suffered a serious spinal injury back in December 2017 during a Monday Night Football game against the Cincinnati Bengals.

He was temporarily paralyzed from the waist down and is goal was to play football again.

While that wasn’t to be, he was able to learn to walk again and was able to dance at his wedding.

“Football may have been taken away from me, but everything it gave me is still here inside,” Shazier said during his retirement announcement.

The Fan’s Colin Dunlap doesn’t believe it’s too soon to allow another player to wear the #50 but he has friends that believe it is.

Number should have been retired in honor of Ryan Shazier and all of the greatness he brought to the team and the awful injury he sustained and the massive rebound he was able to make and had the heart and determination of wanting to come back to the team as well. Other numbers have been retired why not his??? Definitely heartbreaking 💔. Good luck Ryan to you and your family and live your live to the best❤️❤️ still praying for you 🙏🙏

they should retire it. he literally gave up everything for the game

a football jersey number is no way in the same class as bein able to walk again and dance again after bein paralyzed!!

Super Bowl 2022: The Tampa Bay Buccaneers are the reigning NFL champions, but who'll make the playoffs — and lift the Lombardi Trophy at the end of this season?
NFL・2 DAYS AGO
On3.com

As Pittsburgh Steelers wide receiver JuJu Smith-Schuster gets ready for free agency, potential suitors are emerging. Pro Football Network’s Aaron Wilson said one team is starting to separate itself. Wilson reported Tuesday that Smith-Schuster could wind up with the Kansas City Chiefs. The Chiefs pursued him last year before...
NFL・14 HOURS AGO
93.7 The Fan

Aaron Rodgers was noncommittal about his playing future in the aftermath of the Packers’ playoff loss, except to say he doesn’t want to be part of a rebuild. Are the Steelers rebuilding?
NFL・1 DAY AGO
Sports Illustrated

Brown covered a lot of ground, posting a meme critical of three teams at once.
NFL・1 DAY AGO

Even those inside the Pittsburgh Steelers organization — or were just a few days ago — don’t appear to know what the dadgum heck is going on with defensive end Stephon Tuitt. Tuitt’s absence has been one of the great mysteries of the 2021 Steelers season (along...
NFL・11 HOURS AGO
Sportsnaut

The chances that Aaron Rodgers finds himself in Black and Gold next season are pretty good. After the Denver Broncos, the Steelers are considered the 2nd favorite team to acquire the MVP quarterback, according to BetOnline.ag.
NFL・1 DAY AGO

Ratings for NFL games continue to be strong for the most part, but even with the Steelers making it to the postseason for the second straight year, numbers were down locally. Rating in Pittsburgh fell 10 percent compared to 2020.
NFL・1 DAY AGO
Sportsnaut

NFL picks against the spread. NFL Championship Sunday edition. And then there were four. With three road teams winning on
NFL・2 DAYS AGO
The Spun

Saturday night’s divisional round loss could very well have been the Aaron Rodgers final game as a Green Bay Packer. With a number of players headed for free agency, the future of the Packers remains very much up in the air. But according to the three-time MVP, he’s not...
NFL・2 DAYS AGO
Yardbarker

Sean Payton has reportedly not yet committed to returning to the Saints next season while Troy Aikman could be leaving FOX for Amazon, leaving an opening that could put the Saints coach in the booth.
NFL・2 DAYS AGO
Sportsnaut

Just days after the end of the Green Bay Packers’ season, the team has added a quarterback to their QB room. According to NFL reporter Dov Kleiman, the Packers have signed former LSU product Danny Etling. “Packers signed a new QB,” Kleiman tweeted. “Former Patriots Danny Etling, per his...
NFL・14 HOURS AGO
On3.com

Just two days before competing in an NFL divisional round playoff game, Leonard Fournette learned his cousin had died. As tough as it was to swallow, the Tampa Bay running back knew he still wanted to play. He suited up and delivered an impressive two-touchdown performance in spite of his...
NFL・2 DAYS AGO
Larry Brown Sports

The Los Angeles Rams used a huge play late to stun the Tampa Bay Buccaneers on Sunday, and quarterback Matthew Stafford was well aware of how it happened. Stafford found wide receiver Cooper Kupp for a 44-yard gain that set the Rams up in field goal range just before time expired in the fourth quarter. The play came against what was supposed to be an all-out blitz, which left Kupp alone with safety Antoine Winfield Jr. In a one-on-one matchup, Kupp was always going to win. You can see the play in question here.
NFL・2 DAYS AGO
Ok Magazine

All eyes have been on Aaron Rodgers after the Green Bay Packers lost their playoffs game 10-13 over the weekend. The team lost to the San Francisco 49ers on Saturday, January 22. The 38-year-old admitted after the game that he was feeling "numb," telling reporters: "I didn’t think it was gonna end like this," per Fox News.
NFL・1 DAY AGO