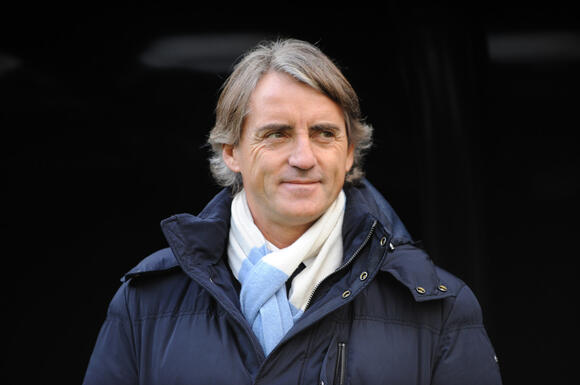 The Old Trafford club are searching for a long-term solution to their current managerial issues, with a whole host of names from across the continent linked with a switch to the club in recent days.

The most prominent target has been the current Paris Saint-Germain head coach Mauricio Pochettino - who is in Manchester for the French club's Champions League clash with Manchester City at the Etihad Stadium.

However, officials at Old Trafford have looked towards a former employee of the reigning Premier League champions, according to a new report from sources in Germany this week.

According to the information of BILD's Head of Football Christian Falk, Manchester United have contacted former Manchester City manager and the current head coach of the Italian national team Roberto Mancini for the available managerial position.

The response from the Italian coach was simple: No.

Christian Falk says that Roberto Mancini responded to contact from Manchester United officials by stating that it is his duty to qualify for the next World Cup in Qatar with the Italian national team.

It seems as though Manchester United will now have to continue their search elsewhere, and with problems surrounding any possible appointment of Mauricio Pochettino mid-season now emerging, an interim coach may be the solution.

That could take the struggling Red Devils to the likes of Ernesto Valverde, Rudi Garcia, or possibly the former Newcastle United manager Steve Bruce - who has reportedly signalled an interest in the vacant position at the club he held a playing career with.

Ralf Rangnick has no concerns about selecting Paul Pogba during the final months of his Manchester United contract, even if the midfielder’s only motivation to play well is to earn a deal at another club.Pogba has entered the final six month of his current Old Trafford terms, with little progress made in discussions over a renewal and a departure on a free transfer in the summer considered likely.The 28-year-old is yet to make an appearance under interim manager Rangnick after suffering a thigh injury while on international duty in November, though returned to full training on Monday.Rangnick expects Pogba...
PREMIER LEAGUE・2 DAYS AGO
AFP

Cristiano Ronaldo is expected to be available for Manchester United's trip to Brentford though will have to come through Tuesday's training sesssion at Carrington, Ralf Rangnick has said.Ronaldo and Marcus Rashford were left out of United's match day squad for Saturday's 2-2 draw at Aston Villa, missing their second consecutive game despite Rangnick expecting both to return.The United interim manager said both players were ruled out of making the trip to Villa Park after Friday's late training session but says both are currently in contention to play Brentford."Cristiano and Marcus were training yesterday so I suppose they will be training...
PREMIER LEAGUE・2 DAYS AGO
CityXtra

Conceding a mere 13 goals in 22 matches so far, Manchester City have the best defensive record in the Premier League this campaign, and it's played a significant role in their dominant position in the Premier League table. A centre-back partnership of Ruben Dias and Aymeric Laporte has been Pep...
PREMIER LEAGUE・1 DAY AGO

In recent times, Manchester City’s academy has been lauded for all the right reasons. Phil Foden’s meteoric rise into becoming one of the most outstanding young players in Europe has been the finest example of the academy’s excellent work in terms of spotting local talent and taking their potential to the next level.
PREMIER LEAGUE・1 DAY AGO
CityXtra

While Manchester City are yet to secure the final jewel in the crown of the club's modern era, the highly-coveted Champions League trophy, the club have greatly benefited from a decade of consecutive qualifications into the competition. Whether those benefits have been financial or simply the experience a club gains...
PREMIER LEAGUE・2 DAYS AGO
CityXtra

Speculation around the Ukrainian left-back's future at the Etihad Stadium has always painted an uncertain picture, almost ever since his arrival at the club in the summer of 2016 from FC Ufa. Oleksandr Zinchenko has been linked with potential moves to the likes of Newcastle United and Genoa in recent...
PREMIER LEAGUE・1 DAY AGO

The Algeria superstar was disappointingly knocked out of the Africa Cup of Nations in the group stage on Thursday night, courtesy of a 3-1 defeat against Ivory Coast on matchday three. The defending Africa Cup of Nations champions failed to win a game across three fixtures, and Mahrez - who...
PREMIER LEAGUE・2 HOURS AGO
CityXtra

As several of the world's leading companies, football brands, and clubs announce their respective awards and rankings for the year of 2021, the number one football video game has now released their world XI from the last 12 months. After a round of voting from millions of players of FIFA...
PREMIER LEAGUE・8 HOURS AGO
TechRadar

Ralf Rangnick's mission to get Manchester United back on track could get a major boost this evening, with the interim boss knowing that a win at Brentford will send his side back up to fifth place. The Londoners' grip on the league is also slipping and could do with a result of their own. Read on to find out how to watch Brentford vs Manchester United online and get a Premier League live stream, no matter where you are in the world today.
PREMIER LEAGUE・1 DAY AGO

Brentford host Manchester United on Wednesday off the back of just one win in their last four Premier League games. In ordinary circumstances, the Bees would not hold out much hope of ending that run. However, the Red Devils have underwhelmed massively in recent weeks and Thomas Frank's side may smell blood.
PREMIER LEAGUE・1 DAY AGO
The Independent

Manchester United look set to be without Aaron Wan-Bissaka until after the upcoming international break due to illness.The defender missed Saturday’s 2-2 draw with Aston Villa and United interim boss Ralf Rangnick revealed he was also ruled out of Wednesday’s match at Brentford and would likely be unavailable for the home clash with West Ham three days later.Asked if Wan-Bissaka would be fit to face Brentford, Rangnick told MUTV: “No, not yet. He’s still ill, I’m afraid. He will not be available for the game (on Wednesday) and also probably not available for the West Ham game.“Hopefully, after the international break, he will be back for training.”After the break that follows the West Ham fixture, United are scheduled to be back in action on February 4 with an FA Cup tie at home to Middlesbrough.
SOCCER・1 DAY AGO
The Independent

Ralf Rangnick considers the issue with Anthony Martial “resolved” following talks with a player he claimed refused to be involved in Manchester United’s trip to Aston VillaUnited had two goalkeepers among their eight substitutes – one short of the number allowed – for Saturday’s 2-2 draw at Villa Park where the France international was conspicuous by his absence.Martial has made no secret of his desire to leave United this month but Rangnick’s claim that the forward “didn’t want to be in the squad” in Birmingham still shocked onlookers.The 26-year-old took to Instagram later that night to say he “will...
PREMIER LEAGUE・2 DAYS AGO
CityXtra

Manchester City's midfield gem Kevin De Bruyne seems to get better and better with each passing season, with his recent match-winning strike against Chelsea to open up a 11-point lead at the top of the Premier League the latest reminder that the Belgium international is back to his best. And...
PREMIER LEAGUE・2 DAYS AGO
CityXtra

Following a failed pursuit of Tottenham forward Harry Kane during the last summer transfer window and the exit of Sergio Aguero to FC Barcelona, Manchester City manager Pep Guardiola was left without a single recognised centre-forward. However, many fans had hopes of seeing rising teenage striker Liam Delap make significant...
PREMIER LEAGUE・2 DAYS AGO
The Independent

Was this the attitude Cristiano Ronaldo demanded?Whatever about refusing to accept criticism, Manchester United’s new generation refused to accept anything other than victory.It was certainly the response, and the result, Ralf Rangnick and his team needed.On a night when they were often second best to Brentford, and mere days after Ronaldo gave such a pointed interview about the attitude of younger players, three of the club’s youth graduates scored to secure a crucial 3-1 win in the race for fourth. The table looks that bit better for United. The mood is that bit improved.That’s the spirit of youth, that feels...
PREMIER LEAGUE・1 DAY AGO
CityXtra

Mahrez has been in sensational form for the Premier League champions since the start of the campaign, with the former Leicester City star often coming up with the goods in front of goal in the absence of a natural striker in the first-team ranks at the Etihad Stadium. The 30-year-old,...
PREMIER LEAGUE・12 HOURS AGO
The Independent

As the Manchester United players celebrated Marcus Rashford’s goal, and Cristiano Ronaldo remained looking rather sullen, Ralf Rangnick felt he’d better have a little word with his main star.“I understand you are ambitious and want more goals,” the German told Ronaldo, “but maybe in a few years when you are a head coach you will realise”.These words are no great secret uncovered. Rangnick offered them up himself after the game.For all the issues that United’s interim coach has had in his first two months, his frankness is to be appreciated. He has no problem telling it as it is, as...
PREMIER LEAGUE・11 HOURS AGO