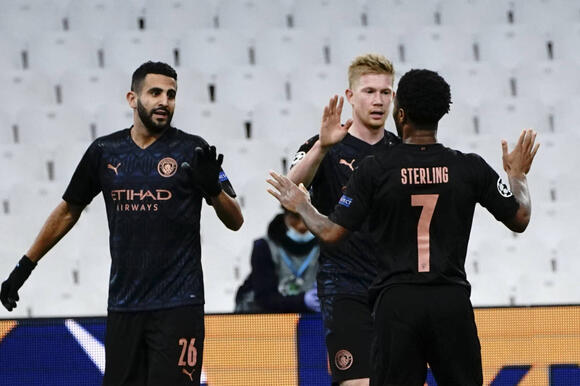 Pep Guardiola's side are looking to guarantee top spot in Group A, as they prepare to come up against some of football's biggest names when Paris Saint-Germain travel to Manchester.

Mauricio Pochettino watched his PSG team capitulate at the Etihad Stadium last May, as Manchester City secured a place in their first ever Champions League final courtesy of a stunning Riyad Mahrez brace.

However, the Parisians won 2-0 back in September, when Manchester City traveled to the French capital on matchday two of this season's group stage competition.

Goals from Idrissa Gueye and Lionel Messi helped PSG take away all three points - the only occasion which City have dropped points in this year's competition so far.

Manchester City come into the match top of Group A, knowing that victory on Wednesday would secure their place in the next round, and cement first position in the group.

Ahead of Wednesday's star-studded fixture, here is how we predict Manchester City to set up for their Champions League clash with PSG.

Pep Guardiola will definitely be without Kevin De Bruyne and Ferran Torres for the match. The latter remains sidelined due to a foot injury, while De Bruyne is self-isolating after testing positive for COVID-19 last week.

The Manchester City boss announced during his pre-match press conference that summer signing Jack Grealish was doing "much better" after missing Sunday's win over Everton through injury, but was not spotted in the open training session o Tuesday evening.

Manchester City have teased a new documentary about goalkeeper Ederson this week, and the Brazilian will hope to be starring between the sticks on Wednesday in his 44th Champions League appearance for the Blues.

Kyle Walker could make his 200th appearance for the club this week, with the 31-year-old set to start at right-back and play his 199th Manchester City game on Wednesday night.

On the opposite flank, Joao Cancelo - whose brilliant pass unlocked the weekend's win over Everton, will start ahead of Oleksandr Zinchenko despite the Ukrainian's impressive performance against PSG last season.

After another exceptional defensive performance against his former club at the weekend, one expects John Stones to keep his place in central defence for Manchester City against PSG.

Alongside Stones at centre-back, Ruben Dias will return to the side after being rested for the game against Everton.

Rodri staked his claim for the goal of the season award with a stunning strike in the Premier League at weekend. The Spanish midfielder, who has been a revelation for Guardiola's side this season, can expect to occupy the holding midfield role.

Ahead of Rodri, and in the absence of Kevin De Bruyne, Pep Guardiola will likely opt for Ilkay Gundogan and Bernardo Silva to play in central midfield for the Blues.

Riyad Mahrez has four goals in five Champions League matches this season and given the Algerian's superb form in Europe, one expects to see the 30-year-old make his 30th appearance in the competition for the Blues.

On the opposite wing, Phil Foden will look to continue his impressive start to the season, with the 21-year-old influential to City's striker-less attack.

Raheem Sterling showed glimpses of form against Everton at the weekend, as he scored the Sky Blues' opening goal. One suspects Guardiola will reward the Englishman for his performance with a start against PSG on Wednesday.

Marcus Rashford eased the gloom around Old Trafford with a stoppage-time winner as Manchester United snatched a dramatic 1-0 Premier League win over West Ham.Ralf Rangnick’s men looked set for more frustration in a poor quality encounter before Rashford latched onto a neat pass from fellow substitute Edinson Cavani to fire home with virtually the last kick of the game.Cristiano Ronaldo had gone close in the opening period and was denied a penalty appeal as David Moyes’ Hammers began to grow in confidence.Fred had the first shot on target for the hosts in the 49th minute which was well saved...
PREMIER LEAGUE・2 DAYS AGO
Washington Post

Gouiri delivers for Nice; Messi back as PSG routs Reims

PARIS — Amine Gouiri scored with a Panenka penalty kick and delivered an assist Sunday for Nice to beat Metz 2-0 and return to second place in the French league behind runaway leader Paris Saint-Germain, which welcomed back Lionel Messi as it routed Reims 4-0. PSG got off to a slow start at the Parc des Princes Stadium but ended up in control with goals from Marco Verratti, Sergio Ramos and Danilo Pereira after Reims crumbled and collapsed in the second half.
SOCCER・1 DAY AGO
CityXtra

Bernardo Silva was largely tipped to evolve as David Silva's successor at the Etihad Stadium when the 27-year-old completed a £43 million move to join Manchester City from AS Monaco off the back of a league-winning campaign in France. The Portuguese, who has been arguably Manchester City's best player...
PREMIER LEAGUE・2 DAYS AGO

With Manchester City operating without a natural number nine this season, the prospect of signing a proven goalscorer in the summer remains an enticing one. Despite Pep Guardiola’s fluid false-nine system reaping rewards as City are in contention on three fronts so far this season, the need for a Sergio Aguero successor remains crucial to the club's future prospects.
PREMIER LEAGUE・2 DAYS AGO
newschain

Aymeric Laporte says runaway Premier League leaders Manchester City must not lose focus as they head into a fortnight’s break on the back of dropping points for the first time since October. City’s impressive winning run was halted at 12 top-flight games by Saturday’s frustrating 1-1 draw at Southampton...
PREMIER LEAGUE・2 DAYS AGO
goal.com

What a game that was from Diego Simeone's men, trailing 2-0 before scoring three goals in the second half – including two in stoppage time – to claim all three points. An epic, monumental comeback. Whew! Take a breather, everyone. Has this been the most Atletico Madrid game...
PREMIER LEAGUE・2 DAYS AGO
World Soccer Talk

Southampton (United Kingdom) (AFP) – Manchester City’s 12-game winning run in the Premier League came to an end as Aymeric Laporte rescued a 1-1 draw against Southampton on Saturday. City were rocked by Kyle Walker-Peters’ first ever top-flight goal in the opening minutes at St Mary’s.
PREMIER LEAGUE・2 DAYS AGO

There is a strong argument to suggest that Kyle Walker has been the most consistent player in the Pep Guardiola era, since his big money move from Tottenham in the summer of 2017. The England international right-back is set for his 126th start in the Premier League against Southampton on...
PREMIER LEAGUE・2 DAYS AGO
vavel.com

PSG are already at the Parc des Princes, and tonight they will be looking to make it three points and remain at the top of the table. Pochettino spoke about Mbappé: "We are happy to see the way his problem is evolving. He trained with us the last two sessions and tomorrow we will make a decision to see if he is in the squad."
UEFA・2 DAYS AGO
The Independent

Liverpool moved to within nine points of Manchester City at the top of the Premier League table with an entertaining 3-1 win over Crystal Palace at Selhurst Park.Virgil van Dijk gave the visitors the lead in the eighth minute, thumping a bullet header beyond Vicente Guaita from an Andy Robertson corner. And Liverpool’s dominance was rewarded with a second shortly after the half hour mark when Robertson crossed for Alex Oxlade-Chamberlain to bring down and fire home at the back post.Palace finally got a foothold in the game towards the end of the first half and continued that urgency after...
PREMIER LEAGUE・1 DAY AGO
The Independent

Manchester City travel to the south coast on Saturday evening to try and extent their lead at the top of the Premier League by beating Southampton.Saints held Pep Guardiola’s men to a goalless draw back in October but today’s visitors have been in scintillating form in recent months, winning their last 12 consecutive league fixtures and building up a lead of 11 points to second-placed Liverpool and 14 to Chelsea in third.Kevin De Bruyne’s superb curling finish was enough to secure victory over the Blues last time out, and the Belgian could start up front at St. Mary’s with Raheem...
PREMIER LEAGUE・2 DAYS AGO

At the start of the ongoing season, the 2021/22 campaign was billed to be a four-horse race between Manchester City, Chelsea, Liverpool, and Manchester United. However, fast forward to the Premier League table at this present moment and Pep Guardiola’s side sit an impressive 11 points clear of second-placed Liverpool.
PREMIER LEAGUE・2 DAYS AGO
LFCTransferRoom

Aymeric Laporte has equalised for Manchester City against Southampton at St Mary's and you can see the goal here. The central defender headed home a fine free kick from Kevin De Bruyne in the 65th minute. The goal had been coming after relentless City pressure with the Saints tiring but...
PREMIER LEAGUE・2 DAYS AGO
CityXtra

It was an awful start for the visitors, who conceded early through Kyle Walker-Peters' first Premier League goal. Manchester City quickly got on top of things, but it took until well into the second-half for the equalising goal to come - thanks to Aymeric Laporte. Claims for a penalty and...
PREMIER LEAGUE・2 DAYS AGO
CityXtra

It has been reported over the course of the weekend, and into the new week, that Manchester City are set to announce the signing of Julian Alvarez from River Plate, for a fee in the region of £20 million. With Pep Guardiola’s side operating without the presence of a...
PREMIER LEAGUE・23 HOURS AGO
Daily Mail

At times, Pep Guardiola resembles King Cnut, protesting to the world that his team is not, in fact, infallible, the title race is never over in January (reader: sometimes it is) and that Premier League opponents are in fact decent sides rather than hapless victims for City to humiliate in a televisual entertainment fest.
PREMIER LEAGUE・2 DAYS AGO
CityXtra

Amid Manchester City’s ongoing search for a new striker following Sergio Aguero's departure last summer, Dusan Vlahovic has been heavily speculated with a potential move to the Etihad Stadium after refusing to extend his existing deal at the Artemio Franchi Stadium past 2023. Apart from being a lethal goalscorer,...
PREMIER LEAGUE・3 HOURS AGO