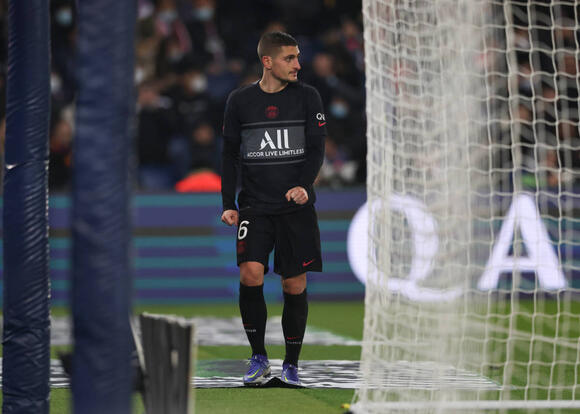 Paris Saint-Germain travel to Manchester in search of a win, as both teams look to secure their spot in the knock-out stages of Europe's premier competition ahead of the final matchday in the group stage.

Manchester City know that a win would not only secure their place in the last-16 of this year's Champions League, but also guarantee their position at the very top of a challenging group.

However, with just hours until kick-off at the Etihad Stadium, Mauricio Pochettino has sustained a significant blow to his choices in midfield, with reports in France stating that two names are now serious doubts for a place in the eleven to face City.

According to the information of Loïc Tanzi at RMC Sport, Marco Verratti sustained an injury during PSG training at the Etihad Stadium on Tuesday night, and it is claimed that it now 'seems complicated' to see the Italian midfielder feature against Pep Guardiola's squad.

To further complicate things for Argentine coach Mauricio Pochettino, who will already have plenty on his mind as a result of interest from Manchester United, RMC Sport are reporting that Georginio Wijnaldum also failed to complete training on Tuesday night.

Manchester City have their own last-minute fitness concerns ahead of the match, with Jack Grealish continuing to be a doubt ahead of the clash against the Ligue 1 giants on Wednesday night.

The England international forward missed the Premier League match against Everton on Sunday afternoon, and was not spotted training with the rest of his Manchester City teammates during the live open session on Tuesday.

As a form of encouragement ahead of the weekend, Pep Guardiola did however confirm during his pre-match press conference that Grealish was doing "much better" compared to last week.

The Algeria superstar was disappointingly knocked out of the Africa Cup of Nations in the group stage on Thursday night, courtesy of a 3-1 defeat against Ivory Coast on matchday three. The defending Africa Cup of Nations champions failed to win a game across three fixtures, and Mahrez - who...
PREMIER LEAGUE・2 DAYS AGO
The Guardian

With the success of Pep Guardiola's false nine system this season, it would be easy to forget Manchester City are in the race for a clinical striker this summer. Sergio Agüero's constant knee troubles combined with Gabriel Jesus' position change allowed the Catalan trial a number of different players in the role - including Kevin De Bruyne, Raheem Sterling, and Phil Foden.
PREMIER LEAGUE・2 DAYS AGO

FIFA have named the world XI of the best players in the world over the past year picked by fans across the globe, with five Premier League players making the star-studded lineup, as confirmed on Thursday. Kevin De Bruyne has been named as part of a three-man midfield alongside Chelsea...
PREMIER LEAGUE・2 DAYS AGO
The Guardian

A drone interrupted play at Brentford, we had a late, late winner at Old Trafford and Newcastle dug in for victory on an eventful afternoon
PREMIER LEAGUE・1 DAY AGO
CityXtra

Bernardo Silva was largely tipped to evolve as David Silva's successor at the Etihad Stadium when the 27-year-old completed a £43 million move to join Manchester City from AS Monaco off the back of a league-winning campaign in France. The Portuguese, who has been arguably Manchester City's best player...
PREMIER LEAGUE・1 DAY AGO
CityXtra

It was an awful start for the visitors, who conceded early through Kyle Walker-Peters' first Premier League goal. Manchester City quickly got on top of things, but it took until well into the second-half for the equalising goal to come - thanks to Aymeric Laporte. Claims for a penalty and...
PREMIER LEAGUE・23 HOURS AGO

On Friday, numerous reports from South America stated that Manchester City were in talks to sign Julián Álvarez - one of Argentina's hottest prospects, with one journalist reporting that a deal was "about to close" for the player to move to England. The 21 year-old was named South...
PREMIER LEAGUE・2 DAYS AGO
CityXtra

Oleksandr Zinchenko remains one of the most under-appreciated players at Manchester City by fans and pundits alike. While the Ukraine international may not be as much of a flair player as some of his fellow Etihad teammates, the former FC Ufa defender certainly puts his all on the line and punches above his weight more than often.
PREMIER LEAGUE・2 DAYS AGO
San Diego Union-Tribune

Whoever decides to follow the unprecedented success Pep Guardiola has had at Manchester City will be given a near-impossible task. The ultimate goal behind the appointments of Ferran Soriano and Txiki Begiristain was to have the structure in place to seamlessly bring Guardiola to the club and allow him all the power to create a winning machine.
PREMIER LEAGUE・1 DAY AGO

With Manchester City operating without a natural number nine this season, the prospect of signing a proven goalscorer in the summer remains an enticing one. Despite Pep Guardiola’s fluid false-nine system reaping rewards as City are in contention on three fronts so far this season, the need for a Sergio Aguero successor remains crucial to the club's future prospects.
PREMIER LEAGUE・1 DAY AGO
CityXtra

On Friday, a flurry of reports from both Argentina and England claimed that Manchester City were in talks to sign Julian Alvarez from River Plate, with the 21-year-old out of contract in December. The centre-forward, who recorded 39 direct goal involvements in 46 appearances for River Plate in 2021, has...
PREMIER LEAGUE・21 HOURS AGO
CityXtra

The England international is currently enjoying his best run of form for the Premier League champions in over a year, after what has been a difficult period on the pitch at the Etihad club for the London-born star. The 27 year-old lost his place in the starting XI halfway through...
PREMIER LEAGUE・2 DAYS AGO
CityXtra

One of the most underrated aspects of Pep Guardiola's tenure as Manchester City manager is his ability to deal with key absences and maintain unprecedented success. His domination of the Premier League is no fluke. When Manchester City were without key left-backs in the 2017/18 season, the Catalan converted central midfielder Fabian Delph into one of the best-inverted full-backs in the league.
PREMIER LEAGUE・2 DAYS AGO
goal.com

What a game that was from Diego Simeone's men, trailing 2-0 before scoring three goals in the second half – including two in stoppage time – to claim all three points. An epic, monumental comeback. Whew! Take a breather, everyone. Has this been the most Atletico Madrid game...
PREMIER LEAGUE・20 HOURS AGO
CityXtra

Reports are continuing to flood in regarding Manchester City's apparent pursuit of River Plate striker, Julian Alvarez. Earlier today, Hernan Castillo, a local journalist, reported Manchester City were 'about to close' a deal to sign the talented youngster - with various TyC Sports journalists confirming that information. It went a...
PREMIER LEAGUE・2 DAYS AGO
CityXtra

After a dominant 1-0 win over Chelsea last Saturday, Manchester City come into the fixture against Southampton in the midst of a terrific 12-game winning streak in the Premier League. A sensational Kevin De Bruyne strike was enough to separate Pep Guardiola and Thomas Tuchel’s sides, as the Sky Blues...
PREMIER LEAGUE・2 DAYS AGO
The Independent

Manchester City travel to the south coast on Saturday evening to try and extent their lead at the top of the Premier League by beating Southampton.Saints held Pep Guardiola’s men to a goalless draw back in October but today’s visitors have been in scintillating form in recent months, winning their last 12 consecutive league fixtures and building up a lead of 11 points to second-placed Liverpool and 14 to Chelsea in third.Kevin De Bruyne’s superb curling finish was enough to secure victory over the Blues last time out, and the Belgian could start up front at St. Mary’s with Raheem...
PREMIER LEAGUE・1 DAY AGO