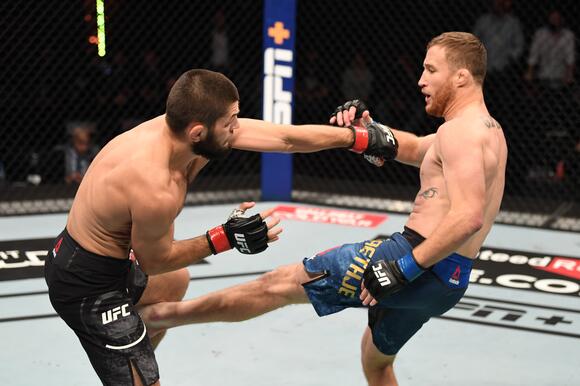 Khabib Nurmagomedov insists Justin Gaethje is the hardest puncher he has ever faced in the UFC.

Having mixed it with Conor McGregor and Dustin Poirier , The Eagle then called it a day after his next fight, which saw him knock off Gaethje on Fight Island, concluding a glittering career with a 29-0 record.

But the October 2020 meeting was memorable for the Russian, who maintains the American “hit like a truck”.

“This guy [Justin Gaethje] hit like a truck, you know,” Nurmagomedov told Mike Tyson on his Hotboxin’ podcast .

“I make him hit me, you know. When I go to the cage and I was sitting like, ‘Okay, I’m going to go, I’m going to bring him into the deep ocean.

”I’m going to make him tired in stand-up and I’m going to bring him on the ground and finish him.”

The praise is bound to provide Gaethje with a boost as he hunts down a shot at the lightweight world championship.

And Gaethje has since knocked off Chandler too, edging a three-round war at UFC 268 and then demanding a shot against the winner of Oliveira vs Dustin Poirier.

“I don’t need to hear anything. I do not. I already know. I’m not going to - those are the things I can’t control, you know? I did what I had to do to control the situation,” Gaethje told MMA Junkie .

“Outside that, I have no more control now. It would be all on the fans, the journalists, the integrity. That has to be questioned.

“People respect us because it’s not boxing because the best fights happen. I have to fight the winner of Charles Oliveira and Dustin Poirier to justify the integrity of this sport, and I’m comfortable with that. I don’t need to do anything else.”

​Conor McGregor shared a bizarre video of himself flexing and posted a defiant message on social media after his pub was petrol bombed. McGregor's Black Forge Inn in Crumlin, Dublin, was targetted by criminals, with the venue struck by two petrol bombs. No damage was done to the premises as...
PUBLIC SAFETY・6 DAYS AGO
firstsportz.com

Conor McGregor’s pub in Dublin, Ireland was reportedly attacked by two individuals who threw petrol bombs at the pub. The pub has been under McGregor’s ownership since 2019 and always remains busy with customers. On Wednesday two people came in a scooter and threw the bombs and fled from the scene. Fortunately, the bombs didn’t hit the pub’s infrastructure or any customers.
PUBLIC SAFETY・6 DAYS AGO
mmanews.com

Before the pub attacks and alleged DJ abuse, Conor McGregor was in hot water for….a photograph?. In January 2016, then-UFC featherweight champion Conor McGregor was under investigation in Ireland for a photo he posted on Instagram that appeared to depict him holding an automatic rifle. The Notorious then returned to Dublin and had the Gardai looking into whether the weapon was real or a replica.
PUBLIC SAFETY・12 DAYS AGO
The Independent

Conor McGregor’s Dublin pub attacked ‘hours after he was there’

Police in Ireland are investigating an incident of “attempted criminal damage” at a pub owned by Irish UFC star Conor McGregor The Black Forge Inn in Drimnagh Road, Dublin was attacked on Wednesday night.No damage was done.The former UFC champion, 33, was in the pub earlier on Wednesday, according to social media posts.Gardai are appealing for witnesses to come forward.“Gardai are particularly keen for anyone with camera footage from the area overnight to make this available to them,” the force said in a statement.Anyone with any information is asked to contact Crumlin Garda station on 01 666 2000.
PUBLIC SAFETY・8 DAYS AGO

Conor McGregor’s pub, The Black Forge Inn, was targeted by criminals with a petrol bomb late Wednesday but no damage to the building was done as well as no injuries to any patrons were sustained. McGregor bought the pub back in 2019 for a reported $2.2 million, and they...
PUBLIC SAFETY・7 DAYS AGO
TheDailyBeast

An investigation is underway after petrol bombs were lobbed at UFC fighter Conor McGregor’s Irish pub in Dublin last night. Two pipe bombs were also found outside the bar, The Black Forge Inn, which fortunately wasn’t damaged in the incident. No injuries were reported and investigators are scouring for surveillance footage and witnesses to help locate the gas-slinging scofflaws. Upon purchasing the pub in his hometown in 2019 for two million pounds, McGregor refurbished the establishment with, as reported by the The U.S. Sun, “a giant medieval-like long table and a large glass cabinet full of his signature whiskey.”
PUBLIC SAFETY・7 DAYS AGO
fightsports.tv

Many UFC fans have likely been typing Nate Diaz next fight recently in their MMA Google searches, as they wonder
UFC・1 DAY AGO

Conor McGregor’s Dublin pub, The Black Forge Inn, was reportedly attacked on Wednesday night by assailants who threw petrol bombs at the premises (per TMZ). Police say there were also two pipe bombs left outside the bar’s entrance. TMZ were told that McGregor was not at the location...
PUBLIC SAFETY・7 DAYS AGO
Bloody Elbow

Retired former UFC double-champion Henry Cejudo has been all over the news these past days because of his incessant calls for a title shot against Alexander Volkanovski. In response, UFC president Dana White simply shut down and scoffed at “Triple C’s” demands. “The last time I saw,...
UFC・2 DAYS AGO
Yardbarker

Was That Conor McGregor? There’s No Way It Could Be!

Many UFC and MMA fans have been left scratching their heads over the last few months, as well-known fighter Conor McGregor has undergone some drastic bulking up over a very short period of time. The former lightweight and featherweight champion fighter has been hulking up since December of last year. Five months before we started to see this incredible size increase, McGregor suffered a painful leg break during his fight against Dustin Poirier. It wasn’t exactly the ending that McGregor or his fans signed up for and McGregor, trash-talking as usual, promised he would make Poirier pay for the injury in the first half of this year. At the time of that match, McGregor weighed in at just over eleven stone and has gained an almost unbelievable 34lbs in six months. Poirier, naturally, has spoken out in the media about this incredible weight gain and said that McGregor needs to slow down on the Black Forge (non-FDA approved supplements). McGregor’s appearance is indeed a surprise, from formerly sleek and slim in the face to incredibly buff and round in the cheeks. It’s hard to figure out what’s really going on here, but we have a few guesses.
UFC・16 HOURS AGO
ESPN

Police in Ireland are investigating an alleged attack on a bar owned by UFC superstar Conor McGregor, according to the establishment's management. Management of the Black Forge Inn in Dublin said in a statement that the alleged attackers "made an unprovoked effort to inflict damage" on the upscale pub Wednesday night. Per the statement, no patrons or employees were injured and no damage was done to the bar. McGregor was not there at the time of the alleged attack.
PUBLIC SAFETY・7 DAYS AGO

The greatness of Conor McGregor: Has McGregor ever been knocked out?

Conor McGregor is one of the most dominant fighters in UFC history but even he has been twice knocked out. The great Floyd Mayweather and Dustin Poirier are the only fighters who have managed to knock out McGregor. In 2017 August, McGregor took on Mayweather in "The Money Fight." It...
UFC・2 HOURS AGO
The US Sun

CONOR MCGREGOR hasn't fought in the UFC since losing his trilogy bout with Dustin Poirier in July last year, with no plans in place for his next bout. UFC chief Dana White has teased fans though, with the possibility of an epic trilogy clash against McGregor's long-time rival Nate Diaz.
UFC・17 HOURS AGO
Insider

Conor McGregor is tipped to return this summer to the UFC for his comeback from a broken leg, the UFC President Dana White said this week.
UFC・2 HOURS AGO
The Independent

A potential fight between Mike Tyson and Jake Paul in Las Vegas is unlikely to be sanctioned.Former UFC champion Michael Bisping believes that strict rules set by the Nevada State Athletic Commission mean that an exhibition encounter will not be licensed. Paul and Tyson are said to be in discussions over a bout, with organisers hoping a clash between the Youtube personality and former undisputed heavyweight champion could generate £36million if held in the American city.Yet Bisping, a former UFC middleweight champion, does not think it would be approved even as reports suggest a verbal agreement between the pair may...
COMBAT SPORTS・1 DAY AGO
Robb Report

The robe Muhammad Ali wore before one of the most important fights of his career could soon be yours. The garment the Greatest wore to the final weigh-in and while walking out for his 1965 fight with Sonny Liston is currently up for sale on Goldin Auctions. The robe isn’t just noteworthy because it was worn before the boxer’s second heavyweight title bout, but also because it’s the first that bore the name he’d go by for the final 52 years of his life. Ali wore the robe, which is made of white terry cloth and has “Muhammad Ali” stitched in red...
COMBAT SPORTS・2 DAYS AGO
101.5 The BUZZ

"You ain't trying to hot box with me, I swing hard liquor Going down by the second round, all hail the underground" Xzhibit, "Bitch Please"
COMBAT SPORTS・2 DAYS AGO
bjpenndotcom

Dana White sends a stern message to Francis Ngannou ahead of UFC 270, tells him to focus on Ciryl Gane not boxing

Dana White has sent a message to Francis Ngannou ahead of UFC 270. In the main event of the first pay-per-view card in 2022, Ngannou is set to defend his heavyweight title for the first time against the interim champ, Ciryl Gane. It’s a fascinating fight due to them being ex-training partners, but a big storyline for the scrap is the fact this is Ngannou’s last fight on his contract.
UFC・12 HOURS AGO
mmanews.com

UFC Heavyweight Champion Francis Ngannou has named the two toughest opponents of his 13-fight UFC career to date. Ngannou is currently preparing for a blockbuster unification showdown with his former teammate and current interim titleholder Ciryl Gane. After the pair’s respective championship-winning performances in 2021, they’ll meet in the main event of this weekend’s UFC 270 pay-per-view.
UFC・2 DAYS AGO