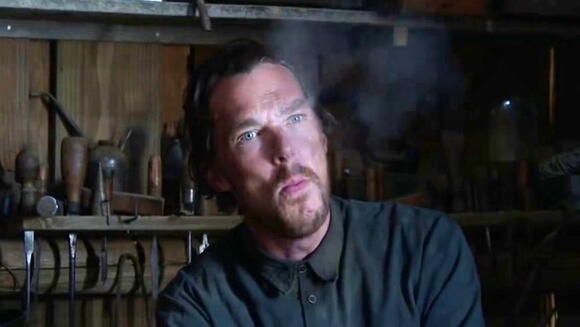 Kirsten Dunst has confirmed that she “isolated” herself from Benedict Cumberbatch on the set of The Power of the Dog.

In Jane Campion ’s acclaimed dramatic film, which arrives on Netflix soon, Cumberbatch plays Phil, a cowboy who works on a ranch with his brother George ( Jesse Plemons ) in the 1920s.

Cumberbatch said last week that this on-screen animosity meant he was “repelled” by his co-star between takes.

“I didn’t want to be really mean to Kirsten, but I needed to stay in character,” he said. “So I didn’t speak to her on-set. She was the same.”

Now, in a new interview with Radio Times , Dunst has confirmed the story. “I isolated myself from Benedict,” she said. “We didn’t talk at all during the filming unless we were out to dinner on a weekend, all together, or playing with our kids.

Cumberbatch has spoken previously about his method acting for The Power of the Dog , revealing that he never broke character on set, and refused to answer if someone called him by his real name.

The actor also gave himself nicotine poisoning three times by smoking a large number of filterless cigarettes, and refused to wash during the making of the film.

The Power of the Dog is in cinemas now, and will arrive on Netflix on 1 December.

This is, like, the 6th article about this topic in the last week. Whotf really cares?

Jesus Christ I've seen this a hundred times already. Also, it was the opposite. He refused to speak to her!

Jesse Plemons says Benedict Cumberbatch’s Method acting as the gruff Phil Burbank while shooting “The Power of the Dog” definitely intensified their on-camera dynamic. “It creates a mood,” Plemons tells me from Austin, where he is filming “Love & Death,” HBO Max’s original limited series about Texas housewife Candy Montgomery (Elizabeth Olsen), who murdered a fellow churchgoer with an ax in 1980. “It kind of starts creeping in and in between in one way or another,” he says. In the Netflix film, written and directed by Jane Campion and based on Thomas Savage’s 1967 novel of the same name, Cumberbatch plays...
MOVIES・13 DAYS AGO
The Hollywood Reporter

Sofia Coppola Praises Kirsten Dunst’s ‘The Power of the Dog’ Performance: “I’m So Proud of You”

Jane Campion has said she fell in love with Kirsten Dunst as an actress after seeing her turn in 1999’s The Virgin Suicides, a film that marked Dunst’s first of three collaborations with Sofia Coppola. “Seriously, in love,” Campion said last November after the Hollywood premiere of The Power of the Dog, a film that finally brought them together. “She’s an actress I was deeply interested in. I love her, and she is that brilliant actress. She has to just put clothes on a line, and I’m riveted.” Critics and awards groups have also been captivated by Dunst’s turn as Rose...
MOVIES・8 DAYS AGO
SuperHeroHype

Benedict Cumberbatch Wraps Reshoots on Doctor Strange 2. Marvel fans got their first look at Doctor Strange in the Multiverse of Madness last month when the film’s teaser trailer was attached to Spider-Man: No Way Home as a post-credits scene. The movie was a mere six months away. However, Benedict Cumberbatch and director Sam Raimi were still working on additional photography on the upcoming sequel. Luckily, the production has officially wrapped. In a recent interview with Deadline, Cumberbatch confirmed that reshoots were completed last Saturday. Benedict Cumberbatch wraps.
MOVIES・13 DAYS AGO
Deadline

Oscar-nominated filmmaker Alex Garland (Ex Machina, Men) is reteaming with A24 for Civil War, an action epic that has Kirsten Dunst (The Power of the Dog, The Beguiled) set to star alongside Wagner Moura (The Shining Girls, Narcos), Stephen McKinley Henderson (Dune, Bruised) and Cailee Spaeny (The First Lady, Mare of Easttown). Garland will direct the film set in a near-future America from his original screenplay. Details as far as its plot are being kept under wraps. A24 will produce, alongside Andrew Macdonald and Allon Reich of DNA and Gregory Goodman, and handle the film’s global release. Garland received his first Oscar nomination...
MOVIES・4 DAYS AGO

"The Power of the Dog" star Kirsten Dunst

Kirsten Dunst, who has starred in such films as "Interview with the Vampire," "Melancholia" and "Spider-Man," is getting Oscar buzz for her poignant acting in Jane Campion's period drama, "The Power of the Dog." She talks with correspondent Luke Burbank about seeking treatment for depression; starring opposite her real-life partner Jesse Plemons; and a trick she learned for how to play drunk.
CELEBRITIES・9 DAYS AGO
heroichollywood.com

Kirsten Dunst is optimistic about returning as Mary Jane Watson in a new Spider-Man movie. About a month since it hit theaters, fans are still reeling from excitement seeing the return of Tobey Maguire as Spider-Man in No Way Home. His return, along with Andrew Garfield, brought millions of fans around the world cheering as they joined the screen with Tom Holland in the biggest film in the webhead’s cinematic history.
MOVIES・8 DAYS AGO
spectrumnews1.com

EL SEGUNDO, Calif. — Screen Actors Guild Award nominee Kirsten Dunst plays a mom in distress in the new Netflix film "The Power of the Dog," which was written and directed by Jane Campion. On "The LA Times Envelope Roundtable" on Spectrum News 1, Dunst opens up to host...
EL SEGUNDO, CA・11 DAYS AGO
Mix 97.9 FM

The following post contains SPOILERS for Spider-Man: No Way Home. But you’ve seen it by now, right?. Spider-Man: No Way Home did the impossible (or at least the often denied by various actors) and brought back Tobey Maguire and Andrew Garfield as the first and second Peter Parkers of movies for a live-action Spider-Man team-up for the ages. Sadly, though, their supporting casts did not join them in the film. There was no returning Mary Janes, no Gwen Stacys, no earlier versions of Aunt May, and the only J. Jonah Jameson to speak of was the new bald one played by J.K. Simmons.
MOVIES・12 DAYS AGO

As she woke up this morning, Kirsten Dunst was thrilled to learn that she’d received a SAG nomination. “To be nominated by your fellow actors, is just the greatest feeling,” Dunst says. “I just wish we could be together to celebrate. That’s the only thing I hope, that I get to see everyone and we get to be together and have some fun.” Jane Campion’s adaptation of the Thomas Savage novel The Power of the Dog stars Benedict Cumberbatch stars as wealthy Montana rancher Phil Burbank. Phil runs a ranch with his brother George (Jesse Plemons), whose decision to marry Rose (Kirsten...
MOVIES・13 DAYS AGO
ComicBook

Spider-Man: No Way Home hit theaters last month and it's already passed $1 billion to become the sixth-highest grossing movie at the domestic box office. One of the biggest draws of the Marvel film has been the cameos from former Spider-Man stars. Not only did many past villains appear in the film, including Alfred Molina (Doc Ock), Willen Dafoe (Green Goblin), and Jamie Foxx (Electro), but fans were thrilled by the return of former Peter Parkers, Tobey Maguire and Andrew Garfield. Rumors about the movies cast began to circulate a year before its release, and one star that was originally thought to be involved with the film was Kirsten Dunst, who played M.J. opposite Maguire's Spider-Man. Not only is Dunst not in the film, but she recently admitted to People that she hasn't seen Spider-Man: No Way Home.
MOVIES・12 DAYS AGO
Vincennes Sun Commercial

Kirsten Dunst Is In Control

When Kirsten Dunst was in her early 20s, the director Jane Campion sent her a letter proposing that they collaborate. It took roughly two decades, but the pair linked up—and in a turn of events they’d never have foreseen back then, they did so with Dunst’s fiancé, fellow actor Jesse Plemons. The end result is The Power of the Dog, and Dunst’s performance in it just might lead to what would somehow be a first for the 39-year-old actor: an Oscar. For W’s Best Performances issue, she reveals the secret to acting drunk and revisits that legendary Spider-Man kiss.
BEAUTY & FASHION・14 DAYS AGO
ComicBook

After captivating fans with projects such as Ex Machina, Dredd, and Devs, Alex Garland is headed back to the world of film with Civil War, an action epic lined up with A24. On Friday, fans got their first inkling (via Variety) of who will be working with Garland on the upcoming project — including some Devs veterans. According to a new report, Kirsten Dunst, Wagner Moura, Stephen McKinley Henderson, and Cailee Spaeny have all joined the cast of Civil War. It is currently unknown what roles these actors will be playing, as well as the plot. Garland wrote the film, which takes place in a near-future America, and will direct.
MOVIES・4 DAYS AGO
The Independent

Kirsten Dunst says she’s “proud” of her iconic upside-down kiss with Tobey Maguire in Spider-Man almost 20 years ago.In the scene, Dunst, who played the role of MJ in the 2002 film, pulls down the mask of an upside-down Spider-Man just far enough to kiss him, after he saves her from a group of gangsters.In an interview with W Magazine, the Power of the Dog actor said that “it looked like a great kiss”, before revealing some behind the scene details.“Water was getting up [Maguire’s] nose because of the rain, and then he couldn’t breathe in the Spider-Man suit,...
CELEBRITIES・13 DAYS AGO
hypebeast.com

Kirsten Dunst revealed that she is more than open to return as Mary Jane in future Spider-Man films. The 39-year-old actress recently shared that it would be an easy decision for her to make as it took up a substantial period of both her professional and personal life. “Of course I would. Of course. I’ve been asked about that a few times. That’s a no-brainer,” she told PEOPLE. “That was a huge part of my career and my life.”
MOVIES・9 DAYS AGO
Ashe County's Newspaper

Benedict Cumberbatch 'loved' being in lockdown with his family

Benedict Cumberbatch "loved" being in lockdown. The 45-year-old actor - who has children Christopher, six, Hal, four, and Finn, three, with wife Sophie Hunter - was filming Netflix Western drama 'The Power of the Dog' in New Zealand when lockdown restrictions to stop the spread of COVID-19 were enforced and "loved" being able to spend time with his family while he learned new skills for the movie.
CELEBRITIES・1 DAY AGO