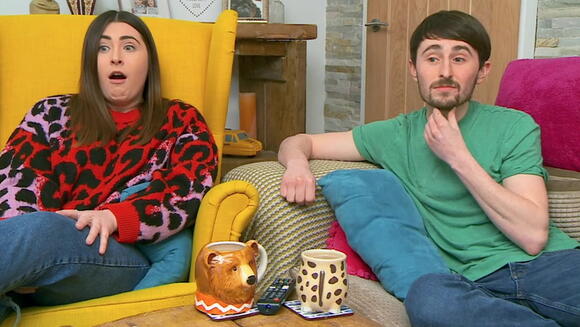 Gogglebox star Pete Sandiford delighted fans as she shared the first photos from his wedding.

The reality TV star, who has appeared on the Channel 4 series since 2017, married Paige Yeomans in May.

On Monday (22 November), Sandiford shared his first photos of the wedding online, which show him in a blue suit and his wife in a long white dress as they walk by the sea.

Yeomans also posted a photo on their wedding day, writing: “22.05.21 When your best friend doubles up as the best husband.”

Last week, Channel 4 announced that they were currently in the process of casting their first Scottish family on Gogglebox , after audiences and politicians complained about the lack of Scottish people on the show.

The Orange Is the New Black alum is reveling in her new status as a Mrs, and she's celebrating by giving fans a look at the day she and her new husband, Dennis Gelin, tied the knot. In an interview with Vogue, Brooks revealed that she and Gelin met during a game night that became a night "I will remember forever."
RELATIONSHIPS・7 DAYS AGO
Hello Magazine

Call the Midwife star Helen George is mum to two daughters with her partner Jack Ashton, who also happens to be her co-star on the hit TV show – and their little girls have the cutest names. Helen and Jack are parents to four-year-old Wren Ivy and their two-month-old...
FAMILY RELATIONSHIPS・1 DAY AGO
The Independent

Gary Barlow has posted a rare photo with his wife online to celebrate their wedding anniversary.The singer, 50, shared a romantic message about Dawn Andrews Barlow, whom he married 22 years ago on Wednesday (12 January).In the Instagram post, he included photos that were taken on the day he met Dawn, when she was a professional dancer, in 1988.“Happy 22nd Wedding Anniversary Mrs.B,” he wrote. “Well what a time we’ve had. So many adventures. 4 beautiful children. Here’s to the next 22 and beyond. Check out the pics of the day we first met - 1988 !!! Shocking!!!”In a more current photo, the pair can be seen raising a glass in celebration of the anniversary.The couple’s relationship began after Dawn, 52, travelled the world with Take That as a backing dancer for their 1995 tour.They married five years later and have three children together. Their fourth child, Poppy, died during birth in April 2012. Barlow most recently appeared as a judge on BBC reality show Walk the Line, which was a ratings flop for the channel.It’s also been revealed that Barlow composed the theme music for new ITV game show Ant and Dec’s Limitless Win.
RELATIONSHIPS・8 DAYS AGO
digitalspy.com

Gogglebox star Sophie Sandiford has confirmed a big career move by opening up a new business. The reality star confirmed in late 2020 that she had left her job at Debenhams, and subsequently embarked on training as a florist. Well, it seems to have all paid off now, as Sophie...
CELEBRITIES・7 DAYS AGO

On January 19, veteran actress Kim Mi Kyung revealed a beautiful photo from a lunch date with her hoobae, Park Shin Hye. The actress then wrote, "Eun Sang is gonna be a wife and a mother~~ Even a simple lunch outing had me so concerned that I was saying, 'Careful! Careful!' about fifty times throughout our meal. A beautiful couple that just cannot be described in words. I sincerely wish all the blessings and happiness in the world for them. Congratulations. Live well and healthy (heart)."
WORLD・1 DAY AGO
Hello Magazine

Amy Robach has the most supportive co-stars at Good Morning America and they all have a close bond off-air. And over the weekend, the TV favorite had an eventful time celebrating her good friend at their baby shower ahead of the arrival of their son. The mom-of-two posted a celebratory...
CELEBRITIES・3 DAYS AGO
Hello Magazine

The Repair Shop's woodwork expert and craftsman Will Kirk shared a photo from a recent episode of the beloved BBC show – but his colleague couldn't resist poking fun at the presenter!. In the snap, uploaded to Instagram, Will stands alongside Kirsten Ramsay, who helped him transform a fairy...
CELEBRITIES・18 HOURS AGO
Hello Magazine

Charley Webb will no doubt have delighted her social media followers as she shared a glimpse of some of the behind-the-scenes fun from her surprise wedding to husband Matthew Wolfenden. The mum-of-three had invited friends and family to what they thought was simply a party to celebrate her 30th birthday,...
CELEBRITIES・8 DAYS AGO

Former Olympic figure skater Michelle Kwan is "overjoyed" to be a mom! The 41-year-old former figure skater announced that she welcomed her first child, a baby girl named Kalista Belle Kwan, following a "challenging...journey to motherhood." The new mom shared the exciting news on Instagram, where she not only revealed her newborn's name, but also shared the first adorable picture of her bundle of joy.
CELEBRITIES・14 DAYS AGO
kpopstarz.com

BLACKPINK Jennie was once again mentioned by "Squid Game" star and veteran actor Lee Jung Jae. In a broadcast, Lee narrated how he met the female idol for the first time, revealing his feelings at that time. On tvN's "You Quiz on the Block," which aired on the 12th, the...
WORLD・8 DAYS AGO
Soompi

Making time for love. Married at First Sight viewers were introduced to Michael Morency and Jasmina Outar during season 14 — and their marriage got off to a rocky start as the two butted heads mid-reception. Lifetime’s reality show features relationship experts pairing up strangers who meet at the...
RELATIONSHIP ADVICE・2 DAYS AGO

Lisa Bonet will turn 54-years-old this year and yet she somehow looks the same age as her 32-year-old daughter, Zoë. The actress who got famous for her role as Denise Huxtable on “The Cosby Show” and “A Different World," she most recently starred in the TV series "Ray Donovan" as Marisol Campos. You likely also know her because of her relationship to Lenny Kravitz, Zoë's dad. But enough about that, back to her ageless complexion.
CELEBRITIES・23 DAYS AGO
StyleCaster

Remembering a Hollywood icon. Sidney Poitier‘s net worth doesn’t even begin to compare to his priceless contributions to Hollywood, but it does include salaries from some of his most notable projects over the years, including Lilies of the Field and To Sir, With Love. Poitier—whose full name was Sidney L. Poitier—was born on February 20, 1927, in Miami Florida to Reginald and Evelyn Poitier. His parents were tomato farmers from the Bahamas who traveled regularly to the U.S. to sell their produce, and it was during one of these trips that Poitier was born in Florida. Shortly after he was born, Poitier...
HOLLYWOOD, FL・13 DAYS AGO
Closer Weekly

Dick Van Dyke, 96, and Wife Arlene, 50, Have Been Married for a Decade: Learn More About Her!

For the majority of his time in the limelight, Dick Van Dyke was married to Margie Willet. However, the pair split in 1984 after 36 years of marriage. Later, in 2012, the actor moved on with his now wife Arlene Silver. To learn more about Arlene and her marriage to Dick, keep reading.
CELEBRITIES・9 DAYS AGO
StyleCaster

Cause for celebration! The celebrity babies of 2022 include kids born with parents like Ashley Graham, Michelle Kwan and other stars. The celebrity babies of 2022 come after a year of births in 2021, which saw stars like Scarlett Johansson, Cardi B, Halsey, Meghan Markle and more famous names welcome children. The Duchess of Sussex and her husband, Prince Harry, announced in a statement in June 2021 that they had welcomed their second child, a baby daughter named Lilibet Diana Mountbatten Windsor. “It is with great joy that Prince Harry and Meghan, The Duke and Duchess of Sussex, welcome their daughter,...
CELEBRITIES・13 DAYS AGO
enstarz.com

Ben Affleck and Jennifer Lopez reportedly have a secret in making their relationship last forever this time. Bennifer luckily got the chance to reignite the relationship they ended two decades ago. They have been showing a closer connection in the past months, leading to fans speculate whether they would hear wedding bells soon.
CELEBRITIES・23 DAYS AGO
E! News

Watch: Jason Momoa & Lisa Bonet Split After 4 Years of Marriage. A plot twist no one saw coming. Jason Momoa and Lisa Bonet announced they are separating after more than a decade together. In a joint statement released on Jan, 12, the former couple wrote on Instagram they are "parting ways in marriage."
CELEBRITIES・8 DAYS AGO
shefinds

2021 was an undeniably difficult year for John Mulaney’s ex, Anna Marie Tendler, and just weeks after he and Olivia Munn shared the first photos of their newborn son, Malcom, on social media, Tendler opened up about leaving the year behind. Taking to Instagram to share her own life updates, the 36-year-old artist revealed that despite the happenings of the past year, she’s ready to move through grief and greet 2022 with open arms.
CELEBRITIES・14 DAYS AGO