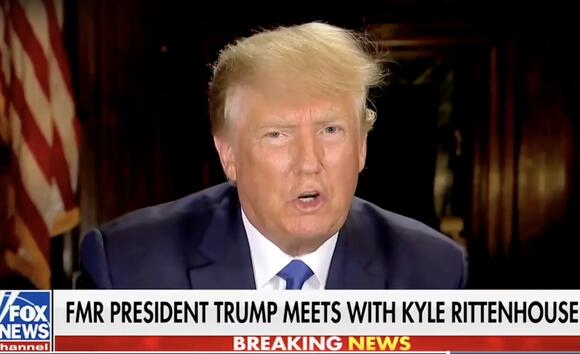 F ormer President Donald Trump described Kyle Rittenhouse as a "nice young man" who endured "prosecutorial misconduct" after having met with him.

The meeting happened at Trump's Mar-a-Lago resort in Florida, and Fox News host Sean Hannity showed a photo at the tail-end of an interview with the former president that aired Tuesday evening. Rittenhouse, whose actions last summer got mixed into the 2020 election discussion, made headlines earlier this week after putting President Joe Biden on notice for what he views as defamation.

"He came over with his mother," Trump said. "Really a nice young man, and what he went through, that was prosecutorial misconduct. He should not have had to suffer through a trial like that."

"I got to know him a little bit," Trump said. "He called, wanted to know if he could come over and say hello because he was a fan, unlike the other guy."

A Wisconsin jury on Friday found Rittenhouse, 18, not guilty on all five charges in the fatal shooting of two men and injuring a third during riots in Kenosha, Wisconsin , last summer. The teenager claims he was acting in self-defense, and the legal drama surrounding him captured the country's attention.

THE KENOSHA VIGILANTES WERE THE MEN WHO ATTACKED KYLE RITTENHOUSE

Trump said Rittenhouse is a "good young guy" and that he had just left Mar-a-Lago.

"He should never have been put through that," Trump said. "That was prosecutorial misconduct, and it's happening all over the United States right now with the Democrats."

Rittenhouse slammed Biden during an interview with Tucker Carlson on Monday, stating a 2020 campaign ad linking him to white supremacists was "actual malice" and defamed his character.

"Well, let's be clear what we're talking about here. This is about a campaign video released last year that used President Trump's own words during a debate as he refused to condemn white supremacists and militia groups, and President Trump, as we know from history, and as many of you covered, didn't just refuse to condemn militia groups on the debate stage — he actively encouraged them throughout his presidency," Psaki said in response to a question on the subject. "So, you know, what we've seen are the tragic consequences of that when people think it's OK to take the law into their own hands, instead of allowing law enforcement to do its job, and the president believes in condemning hatred, division, and violence. That's exactly what was done in that video."

same old trump welcoming a killer he should be hanged since like his friend trump they both get away with murder!! they both should be in prison

Leave it to trump show,not the least bit of respect for the families who lost folks.Discusting as usual.

well, Biden messed up. Public officials aren't supposed to comment about on going criminal investigations. Guess his handlers forgot to tell him about "innocent until proven guilty". Kyle has an open and shut case if he presses charges.

Manchin remains peeved over a White House statement that singled him out, The Washington Post reported.
CONGRESS & COURTS・23 HOURS AGO

The new Gallup survey found that 37 percent of U.S. adults rate Biden as a strong and decisive leader.
PRESIDENTIAL ELECTION・23 HOURS AGO
Newsweek

Banks also tweeted a video of the exchange between President Joe Biden and Fox News' Peter Doocy with the caption "Congrats" and tagged Doocy.
PRESIDENTIAL ELECTION・18 HOURS AGO
Newsweek

"This November is about one thing: It's impeaching Joe Biden to stop this madness and to stop this illegitimate regime from destroying our nation," said Bannon.
PRESIDENTIAL ELECTION・1 DAY AGO
Newsweek

The former president is currently leading the Florida governor by an average of 38 percentage points.
PRESIDENTIAL ELECTION・1 DAY AGO

Donald Trump has been compared to Jeb Bush, who also went viral over a similar occurrence in 2016, on social media.
POTUS・2 DAYS AGO
Newsweek

The controversial remark came after Doocy asked the president if inflation will be a "political liability in the midterms."
PRESIDENTIAL ELECTION・1 DAY AGO
Reuters

WASHINGTON, Jan 25 (Reuters) - Dominion Voting Systems Corp has told a court there is "no realistic possibility" that the voting machine manufacturer will reach settlements in its billion-dollar defamation lawsuits against Rudy Giuliani and Sidney Powell, lawyers who worked for former President Donald Trump. Dominion and another voting software...
U.S. POLITICS・16 HOURS AGO

"It's a great asset - more inflation." Biden shook his head and added, "What a stupid son of a (expletive)."
PRESIDENTIAL ELECTION・22 HOURS AGO
Newsweek

The president may have abandoned hopes of working with the GOP as he recently criticized his opponents in an address asking: "What are Republicans for?"
PRESIDENTIAL ELECTION・21 HOURS AGO
USA TODAY

Joe Biden calls Fox News' Peter Doocy an SOB. He shouldn't have. Why it's not a big deal

Joe Biden called Peter Doocy of Fox News an SOB, evidently not realizing that his microphone was on. Right-wing outrage was the height of hypocrisy.
PRESIDENTIAL ELECTION・1 DAY AGO
The Guardian

In past years, news anchors, reporters, commentators, and late-night hosts have unabashedly gushed over Republican senators who’ve broken ranks with their party, hailing them as "mavericks" and "heroes" for casting politics aside and voting with their "conscience." However, when Democrats like Kyrsten Sinema, D-Ariz., and Joe Manchin, D-W.Va., buck...
PRESIDENTIAL ELECTION・1 DAY AGO
POLITICO

“I get along great with Ron,” Trump said.
POTUS・1 DAY AGO
WashingtonExaminer

"He will be helpful in winning back House seats," she said Sunday, but predicted "there starts to be a break" after the midterms.
PRESIDENTIAL ELECTION・2 DAYS AGO