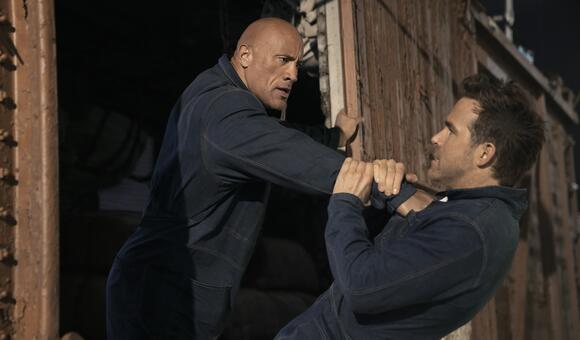 Through its first ten days on Netflix , the Dwayne Johnson-Gal Gadot-Ryan Reynolds $200M action heist movie Red Notice is already the streamer’s second most watched movie of all time with 277.9M hours clocked.

The Rawson Marshall Thurber directed title is honing in on being the streamer’s most-watched-movie-of-all-time, that currently being the Sandra Bullock thriller Bird Box, which counts 282M hours. See the full list here .

In Netflix’s second week of its top 10 most watched film charts (English), the streamer reports that Red Notice was the No. 1 movie for Nov. 15-21 logging 129.1M hours watched. In second, was their Vanessa Hudgens franchise threequel, The Princess Switch 3: Romancing the Star, with 24.77M hours watched by subscribers.

A number of rival studio library hits flooded the top 10 including the Johnson-Hart movie Central Intelligence, and DreamWorks Animation’s The Croods and Trolls. Curiously absent from this week’s list is Lin-Manuel Miranda’s feature directorial musical Tick, Tick…Boom about Jonathan Larson. The pic, which dropped on Nov. 19, is 88% certified fresh on Rotten Tomatoes and receiving rave reviews for Andrew Garfield’s turn as Larson.

Fathom Events presents Betty White: A Celebration in 1,529 locations nationwide, a one-day-only special event on Monday honoring the actress who died Dec. 31 just a few weeks shy of her 100th birthday. The star-studded reflection on White’s life and career, which had already been set by filmmakers Steven Boettcher and Mike Trinklein to celebrate her centennial Jan. 17, will run three showtimes at 1 pm, 4 pm and 7 pm. As for weekend openings, a pair of solid documentaries and two dramas — about memory loss and global apocalypse by pink gas — debut in a frame where there isn’t...
NEW YORK CITY, NY・2 DAYS AGO
Deadline

EXCLUSIVE: Actor and filmmaker Mark O’Brien is set to star in season 2 of HBO’s Perry Mason in the recurring guest star role of Thomas Milligan. Thomas is Los Angeles’ ambitious Deputy District Attorney. He’s described as an aggressive attack dog in court as he strives to make his mark and ascend to greater heights, no matter whose blood he has to spill to get there. Season 2 will be eight episodes long with Matthew Rhys returning to the title role in the Emmy-nominated series. Season 2 of Perry Mason takes place months after the end of the Dodson trial. Perry (Rhys) has moved off the...
TV SERIES・2 DAYS AGO
Deadline

The current fourth season of Netflix’s Cobra Kai finished No. 1 in streaming hours for the week of January 2-9, repeating in the top spot among all the streamer’s TV series after the season debuted December 31. The data for the most recent frame was released Tuesday as part of Netflix’s weekly rankings for its film and TV fare, based on hours viewed in a title’s first 28 days on the platform. On the film side, Adam McKay’s satire Don’t Look Up moved up to No. 2 on the all-time most-viewed list, adding 58.2 million hours to take it to 321.52 million...
TV SERIES・5 DAYS AGO
Popculture

Director Lana Wachowski is back at the box office next week with The Matrix Resurrections next week, which will definitely send people down a rabbit hole of her past work. However, you might want to catch the 2013 drama Cloud Atlas, an infamous but ambitious flop, before it leaves Netflix on Jan. 31. Starring Tom Hanks, Halle Berry, Hugh Grant, and Hugo Weaving, Cloud Atlas tells the story of reincarnation, with souls traveling through different moments in time and showing how an act of kindness can have a ripple effect through history and the universe.
TV & VIDEOS・28 DAYS AGO

While Netflix's most popular show is full of unfamiliar faces, the same can't be said of its biggest movie. Last year, Red Notice quickly became the streaming service's most-watched movie of all time. With Dwayne Johnson, Ryan Reynolds, and Gal Gadot in starring roles, its success was all but assured. As such, it's no real surprise that Netflix wants to bring the trio back for a sequel. In fact, according to Deadline, Netflix is planning on shooting two Red Notice sequels back to back.
TV & VIDEOS・3 DAYS AGO
Variety

Variety's Awards Circuit is home to the official predictions for the upcoming Oscars and Emmys ceremonies from film awards editor Clayton Davis. Following history, buzz, news, reviews and sources, the Oscar and Emmy predictions are updated regularly with the current year's list of contenders in all categories. Variety's Awards Circuit Prediction schedule consists of four phases, running all year long: Draft, Pre-Season, Regular Season and Post Season. The eligibility calendar and dates of awards will determine how long each phase lasts and is subject to change. To see all the latest predictions, of all the categories, in one place, visit THE...
MOVIES・23 DAYS AGO
Variety

‘House of Gucci’ Will Be Available to Watch Online in February

“House of Gucci” will be available to own digitally on Feb. 1 and on Blu-ray, DVD and on demand on Feb. 22. Directed by Ridley Scott, “House of Gucci” stars Lady Gaga as Patrizia Reggiani, the wife of Maurizio Gucci (Adam Driver), who was tried and convicted of orchestrating her ex-husband’s murder. It follows the events and aftermath of Gucci’s 1995 assassination, spanning three decades in the life of the high fashion family. “House of Gucci” also stars Jared Leto, Jeremy Irons, Salma Hayek and Al Pacino. The Blu-Ray DVD and digital package includes all-new exclusive bonus content, including: “The Rise of...
MOVIES・5 DAYS AGO
Variety

Jonah Hill Says Leonardo DiCaprio Forced Him to Watch ‘The Mandalorian,’ but ‘I Didn’t Give a F—‘

Jonah Hill is not a fan of “The Mandalorian” despite Leonardo DiCaprio’s best efforts to get his friend and frequent co-star hooked. Hill told W Magazine that he often does not watch science-fiction films and television series because “I used to have a rule: If it didn’t happen or it couldn’t happen, then I just wasn’t interested, because I would lose focus.” While making Adam McKay’s Netflix satire “Don’t Look Up,” DiCaprio got Hill to break his rule and give the Disney Plus “Star Wars” television series a try. “Leo made me watch ‘The Mandalorian’ when we were making ‘Don’t Look...
MOVIES・2 DAYS AGO

THEN AND NOW: The cast of the original 'Spider-Man' 19 years later

Nowadays, Maguire has stayed out of the spotlight while costar Kirsten Dunst continues to act. Tobey Maguire portrayed Spider-Man/Peter Parker, whose life as an ordinary teenager was changed after being bitten by a genetically modified spider. While on a field trip to a genetics lab at Columbia University, a spider...
MOVIES・27 DAYS AGO
KCAU 9 News

The Most Popular Movies on Netflix This Week

Netflix has always been very protective with their data. They would announce that this movie or that show was the most-watched series in history, but they wouldn’t tell you how many viewers that meant, or how many of those supposed viewers actually sat through the entire thing. (Some of Netflix’s “most watched” metrics in the past were based on accounts that watched a minimum of two minutes of something, so if you hated the first five minutes of, say, The Wrong Missy and then turned it off, Netflix counted that as a successful view).
TV & VIDEOS・5 DAYS AGO
Newsweek

Why Adam Sandler and Kevin James Aren't In 'Hotel Transylvania 4'

"Hotel Transylvania: Transformania" is without its original Dracula and Frankenstein. Here's how the movie's director explained the change.
MOVIES・2 DAYS AGO

“Succession” star Brian Cox’s long-awaited memoir “Putting the Rabbit in the Hat” is finally hitting shelves on January 18, and if the latest excerpt in Esquire is any indication, this will be a juicy tome. While fans were already treated to pieces of Cox’s brutally honest book back in the fall, a new selection reveals even more Hollywood screed — and why he turned down high-profile projects like “Game of Thrones” and the “Pirates of the Caribbean” film series. (Via Variety.) “I’m often asked if I was offered a role in ‘Game of Thrones’ — reason being that every other bugger...
MOVIES・2 DAYS AGO
CinemaBlend

Watch Out, Red Notice, Another Netflix Film Is Coming For Your Record

Just last month, Dwayne “The Rock” Johnson broke out the tequila to celebrate an incredible record for his Netflix film Red Notice when it became the most watched movie in Netflix history. The action flick also starring Ryan Reynolds and Gal Gadot beat out a record set by Bird Box back in 2018. Unfortunately for Red Notice, it looks like it’s going to be dethroned soon now that another new release is coming for its numbers.
MOVIES・10 DAYS AGO
d1softballnews.com

Don’t Look Up record, is the third most watched movie on Netflix

The satirical Don’t Look Up with Leonardo DiCaprio and Jennifer Lawrence turned out to be the third most watched movie ever on Netflix in just eleven days. Which movie has beaten it over the years?. The network still discusses Don’t Look Up, the satirical comedy by Adam McKay led...
TV & VIDEOS・11 DAYS AGO
celebritypage.com

According to Deadline, Netflix plans to shoot two more sequels to Red Notice. Red Notice is officially coming back! The beloved action comedy follows two agents as they hunt down a wanted art thief. Dwayne, "The Rock" Johnson and Ryan Reynolds star, alongside Gal Gadot. With its action-packed scenes and hilarious one-liners, it's safe to say that these sequels have a lot to live up to.
TV & VIDEOS・4 DAYS AGO
wjtn.com

Netflix has reportedly given the green light to two sequels to Red Notice, the streaming platform's hit film starring Dwayne "The Rock" Johnson, Ryan Reynolds, and Gal Gadot. The action comedy, which features Reynolds as a wily art thief who forms an unlikely partnership with Johnson's FBI profiler to catch Gadot's criminal mastermind, debuted in November, and became the most-watched movie in Netflix's history.
TV & VIDEOS・4 DAYS AGO
pasadenanow.com

“Don’t Look Up” was the most-watched English- language film on Netflix for the second consecutive week with viewership increasing 37.2% from the previous week, according to figures released Tuesday by the streaming service. Viewers spent 152.29 million hours between Dec. 27 and Sunday watching the comedy about an...
TV & VIDEOS・12 DAYS AGO
Escapist Magazine

Everyone watched Red Notice. It became Netflix’s most-watched movie ever with more than 328 million viewing hours. It was also demonstrably a terrible film. Quantity, however, trumps quality, and Netflix has greenlit another two films in the franchise with the film’s three stars — Dwayne Johnson, Gal Gadot, and Ryan Reynolds — returning. Red Notice 2 and 3 will be filmed back to back with production beginning in 2023.
TV & VIDEOS・4 DAYS AGO
24/7 Wall St.

This Is The Oldest Oscar Winner Of All Time

The first Academy Awards were given out in 1929 based on voting by members of the Academy of Motion Picture Arts and Sciences (AMPAS). What was a private dinner to host the awards ceremony has now become a public spectacle viewed by millions of people each year, in a television show that goes on for […]
MOVIES・10 HOURS AGO