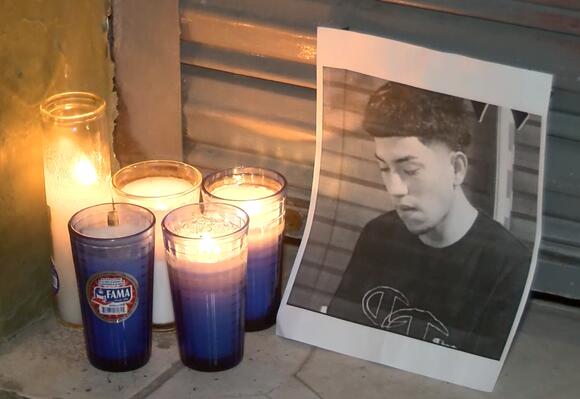 EL PASO, Texas (Border Report) – The mother of an 18-year-old U.S. citizen shot dead last Friday in Juarez is denying that her son had pulled a gun on a Mexican soldier.

The soldier fatally wounded Juan Carlos Medina after the teen ran away from a pedestrian checkpoint on the south side of the Paso del Norte Bridge and allegedly stopped to point a gun at him.

Chihuahua state police said the soldier fired once at Medina with his FX-05 “Fire Serpent” rifle. The bullet penetrated the teen’s underarm and struck vital organs.  Medina, who allegedly was trying to smuggle into Mexico two brand-new guns inside his backpack, died at a hospital shortly after.

But Karla Reyes said she has been talking to witnesses who told her that her son never pointed a gun at the soldier.

“They said he was stopped for a routine search. He did not want to be searched. He ran away. That’s when they shot him. Witnesses tell me that he never pulled out a weapon. […] and even if he had, that’s not enough to shoot him dead,” Reyes said.

Chihuahua Deputy Attorney General Manuel Carrasco said the investigation is ongoing and that police are trying to examine any possible security camera footage.

Juarez Mayor Cruz Perez Cuellar said the smuggling of guns from the United States is a big problem in his city. Many of those guns are used by criminals to commit murder, he said.

That’s the official line in Mexico, whose officials have sued American gun manufacturers alleging they know their guns will be taken across the border to Mexico and be used in crimes. Mexico bans gun ownership except through rare permits issued by the Mexican army.

In an interview this past weekend, Perez Cuellar opined that the soldier, a member of Mexico’s National Guard assigned to security at the Paso del Norte Bridge, was just doing his job.

But Reyes is calling for an in-depth investigation. She said her son was born in the United States and went to school in El Paso. He lived in Juarez with his parents but had moved in with his grandmother in El Paso to work. He did landscaping work and maintenance with a relative there, his mom said.

“I don’t know about the weapons, but my son did not have economic need. He had a job (in El Paso), he had money. But if it’s true he had those weapons, they (were never fired), they were brand-new,” she said.

Teen had no business trying to smuggle weapons into Mexico and as a US citizen, why would he want to go into Mexico knowing Mexico has a right to search everyone trying to enter Mexico!

So a criminal son had no bad intentions after breaking Mexican laws and running away. I'm sure you knew what your kid was doing

Police in Zacatecas have recovered the bodies of three missing fellow officers inside an abandoned van near the town of Sombrerete.
EL PASO, TX・18 HOURS AGO
Border Report

Mayorkas: ‘We ended the policies of cruelty’ on immigration

The man responsible for safeguarding the nation’s security on Thursday did not publicly address the record surge in unauthorized migration, but emphatically defended the change in philosophy taking place at America’s borders.
EL PASO, TX・1 DAY AGO
Border Report

Police in Juarez, Mexico, are reporting the arrest of a man and a woman in connection with the murder and dismemberment of a lesbian couple.
EL PASO, TX・4 DAYS AGO

Baja California Governor Marina del Pilar Ávila is appointing a special prosecutor to look into the murders of Lourdes Maldonado and Margarito Martinez, both journalists in Tijuana, both killed within the last week.
CALIFORNIA STATE・3 DAYS AGO
Border Report

Mexican authorities are reporting the seizure of more than 3,000 migrants during a 48-hour period beginning last Friday in the states of Chiapas, Tabasco, Oaxaca, Veracruz and Nuevo Leon.
EL PASO, TX・4 DAYS AGO
Border Report

The governor of Arizona welcomed Department of Homeland Security Secretary Alejandro Mayorkas to the border by calling on him to resign.
ARIZONA STATE・1 DAY AGO
Border Report

Broken line blamed for millions of gallons of raw sewage that flowed into U.S. from Mexico

Yet another massive sewage spill sent millions and millions of gallons of untreated raw sewage from Mexico into the Tijuana River Valley just inside U.S. territory.
SAN DIEGO, CA・1 DAY AGO

- The 100 acres of the National Butterfly Center, one of the biggest eco-tourism attractions in South Texas, is closed this weekend due to what officials call "credible threats" from hundreds of politicians and conservatives who are expected to come to the Rio Grande Valley for a border rally and tour starting Friday. The center did not open its doors on Friday and will remain closed through Sunday, according to a letter sent to its donors, which was obtained by Border Report. This has prompted concern from center supporters, and locals who are worried about this weekend's rally.
MCALLEN, TX・17 HOURS AGO
Border Report

CBP officers at the port conducted a biometric check on the man Friday and confirmed him as 40-year-old Steven Guajardo Servantes, who is wanted by the Bee County Sheriff's Office and Austin Parole Board, CBP officials said Monday morning.
MCALLEN, TX・4 DAYS AGO

A Texas Department of Public Safety special agent has died after a crash near the border, DPS announced Saturday.
TEXAS STATE・4 DAYS AGO
Border Report

New Mexico bill sponsor: 16-year-olds ‘can drive, they can work, so why can’t they vote?’

EL PASO, Texas (Border Report) – While Texas clamps down on mail-in voting and bans the mailing of unsolicited ballots, its neighbor to the west is trying to expand who can vote and how they can do it. The New Mexico Voting Rights Act calls for automatic voting registration of eligible citizens, declares Election Day […]
TEXAS STATE・13 HOURS AGO
Border Report

“It’s very important for Juarez to take (preventive) measures to avoid further contagion,” she said in her daily broadcast. “Wear masks, isolate if you’re positive. Juarez needs to increase its efforts so we don’t continue to see so many cases.”
EL PASO, TX・4 DAYS AGO

The U.S. government has restarted the remain-in-Mexico program in South Texas and is sending some asylum seekers back to Mexico, however most are choosing to go to the interior of the country, rather than wait on the border during their immigration proceedings, Border Report has learned. The first asylum seekers have been sent back by the Department of Homeland Security under the Migrant Protection Protocols program (MPP), which was restarted in South Texas on Wednesday.
TEXAS STATE・4 DAYS AGO
Border Report

Texas Gov. Greg Abbott on Thursday asked for the support of a dozen state attorneys general in battling drug cartels and what he calls a lack of effective border security policies by the Biden administration.
TEXAS STATE・1 DAY AGO
Border Report

The county judge for the most populated South Texas county has again come down with coronavirus, as the number of cases in the border region continue to spike.
HIDALGO COUNTY, TX・2 DAYS AGO
Border Report