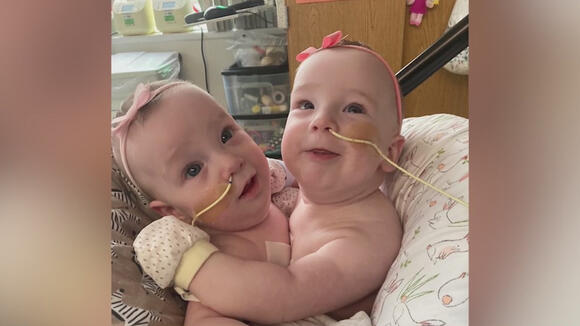 “Susannah is the feisty one, she kind of does everything first,” Stephanie said. “She talked first, smiled first, she was the bigger one for a while. And then Elizabeth was the one who had trouble gaining weight and so she’s kind of been the more reserved baby. But in the last couple of weeks, she has found her voice.”

Stephanie and her husband Dwight, a pastor in Birmingham, Alabama, have three older children; Mac, Judah and Emmet, so they’ve been on the parenting journey for a while. But the last year has been their most difficult.

“A lot of deep questions and thinking and reflecting and asking what the Lord was doing in this and how we were supposed to process it,” said Dwight, who is originally from Winston-Salem. “It was definitely very hard for us in the beginning to process.”

Susannah and Elizabeth haven’t left the Children’s Hospital of Philadelphia (CHOP) since they entered the world on April 22. The girls are conjoined, connected from their belly buttons to their chests. They share a liver, part of their digestive tract and small intestines. Since the beginning, the odds have been stacked against them.

Stay on top of breaking news and weather with the FOX8 mobile app.

“The chances of conjoined twins or just having conjoined twins are extremely low and most do not survive in utero,” Dwight said. “Any that do that are born, most of those do not live. And then, of the ones that live, a very small percentage can be separated and continue to thrive through all that.”

Complex medical issues aside, Dwight and Stephanie believe the biggest hardship is never being together as a family of seven — because of COVID-19 hospital policies.

“I think the Lord has been faithful to kind of preserve our children in a way and then give us people like the nurses here at the hospital to love on these babies when we can’t be here to do that,” Stephanie said.

After a year of preparation and prayer, Susannah and Elizabeth are scheduled for separation surgery on Dec. 10. The highly complex procedure is expected to last up to 12 hours with two teams of more than 30 medical experts involved.

“It’s really scary. It’s a lot of mixed emotions. We’ve been looking forward to this, it’s a huge, kind of central piece of this puzzle we’ve been waiting for,” Dwight said. “But it’s very risky, life-threatening risk level.”

The couple knows the faith they’ve relied on to get them to this point will be what pulls them through their next chapter.

“We did not get to control any aspect of these girls’ lives, their existence, and the fact is that they’re still being sustained today,” Stephanie said. “We just don’t have any control over it, so that’s kind of a hard place to come to you. But at the same time, it’s a freeing place to come to.”

“We don’t have control, but someone does,” Dwight said. “It’s their creator.”

For the latest news, weather, sports, and streaming video, head to WGHP FOX8.

awe they are soooo beautiful 😍 ❤ 💕 prayers for a safe separation 🙏 God place your hands on these angels and help then both to make it threw this in Jesus name amen .... 🙏

For everyone evoking the name of God for a successful separation, why didn't His Omnipotence fix these two in the womb? Do you think God is needy and selfish? Causing plagues, calamities, violent acts just to hear us as we cry out for salvation? if these two survive this procedure it will be entirely based on the skill of the medical staff.

Blessed are you Elohim Gadol who has manifested through the Holy Scriptures that nothing, absolutely nothing is impossible for You. I pray in the name which is over every name over the face of the Earth, in the name of Yeshua HaMashiach, blessed is he...I pray that You, Aba may take control before, during and after this surgery. May You Aba, take good care of these two beautiful girls Susannah and Elizabeth Castle. Amein, Amein.With love, Moshe

Operation XCEL strives to ‘never count a kid out’

“I have some pretty good success stories,” says Charlene Gladney, with a gleam in her eye. That’s not a boast, just a fact – and it starts with her own story. Charlene grew up in Greensboro, went first to NC State where she earned her bachelor’s degree and later to North Carolina A&T where she […]
GREENSBORO, NC・5 HOURS AGO
FOX8 News

1-year-old Bhodie’s a playful guy and a quick learner. Can you give him a home?

(WGHP) — Not every pup at Triad Golden Retriever Rescue is a golden retriever. Take for instance Bhodie! Sometimes, they say, TGRR gets a non-golden pup they just can’t turn away. Bhodi is a 1-year-old boy, and while he may look like a grown-up guy, he’s still got a lot of puppy energy. He loves […]
PETS・1 DAY AGO
FOX8 News

The couple found the neighborhood leveled, smoke still rising from their home. But inside was something they did not expect.
RELATIONSHIP ADVICE・7 HOURS AGO
FOX8 News

Is headache a symptom of the omicron COVID variant?

One early symptom many are reporting is so mild and commonplace, it can be easy to miss: headaches.
PUBLIC HEALTH・9 HOURS AGO

Does omicron cause loss of smell or taste?

Losing your sense of taste or smell used to be the telltale sign that you weren't sick with a cold or the flu – it was almost certainly COVID-19. Omicron is making things less obvious.
PUBLIC HEALTH・1 DAY AGO
FOX8 News

NEW YORK (AP) — Cardi B has offered to pay the burial costs for all 17 people killed in a fire that ripped through a New York City high-rise. New York City Mayor Eric Adams announced Wednesday that the Grammy-winning rapper had offered the financial relief for victims of the fire in the Bronx, where she grew […]
NEW YORK CITY, NY・4 HOURS AGO
FOX8 News

Preparing for the ‘endemic’ stage of COVID-19: What this looks like

There's growing talk in the medical community that the COVID-19 pandemic may soon be entering the "endemic" phase.
SAN FRANCISCO, CA・1 DAY AGO
FOX8 News

Not even the suspect's arrest has answered the question: Where is Ahrea'l Smith?
VIRGINIA STATE・1 DAY AGO

I just took an at-home COVID test. When should I test again?

You've done your at home COVID-19 test, but now when should you do another one? Here's what the CDC recommends.
PUBLIC HEALTH・5 HOURS AGO
FOX8 News

Inmates say they were given ivermectin in ‘experiment,’ told it was ‘vitamins’

Four inmates at a northwest Arkansas jail sued the facility and its doctor Thursday after they said they were unknowingly prescribed ivermectin to treat COVID-19 despite health officials' warnings that the anti-parasitic drug shouldn't be used for that purpose.
LITTLE ROCK, AR・1 DAY AGO
FOX8 News

Dumped? You can get paid $1,100 to listen to breakup songs

Most people listen to Taylor Swift and cry for free. Now, one company wants to hire someone to listen to breakup songs for 24 hours.
ENTERTAINMENT・17 HOURS AGO
FOX8 News

While one ceremony has been rescheduled, another has been forced to move to another day.
ENTERTAINMENT・23 HOURS AGO

RALEIGH, N.C. (WGHP) — LaKisa McKethan, a Cumberland County mom and factory worker, spun a giant prize wheel at the Bigger $pin Live Event and landed on a $500,000 prize on Wednesday, according to an NC Education Lottery news release. “I was nervous, but I’m happy,” McKethan said afterward. “It was fun.” McKethan, a third-shift […]
CUMBERLAND COUNTY, NC・55 MINUTES AGO
FOX8 News

Some patients in California received a smaller than recommended dose of their Pfizer vaccine last year.
WALNUT CREEK, CA・1 DAY AGO
FOX8 News

STOKES COUNTY, N.C. (WGHP) — Five children were found safe after going missing on Belews Lake on Monday, according to an official with knowledge of the scene. A man had five of his children go in the water on inflatable paddleboards at the Pine Hall Boat Ramp on Belews Lake. At some point around sunset, […]
STOKES COUNTY, NC・1 DAY AGO
FOX8 News

‘He died a hero’: family mourning after man jumped into a frozen pond to save his granddaughter

CHARLESTON, Ill. (WCIA) – Saturday, January 15th started out like any other day. “Ma’Lyiah and her sister Bailey have daily chores, and one of them is they walk their six dogs. They have four Pitbulls and then two little bitty dogs. It’s just part of what they do. They’re used to it, they take them […]
CHARLESTON, IL・1 DAY AGO
FOX8 News

Former emo kids, rejoice. Paramore, My Chemical Romance, Dashboard Confessional, A Day to Remember, Bright Eyes, Avril Lavigne and so many more are all coming together for a one-day music festival.
MUSIC・22 HOURS AGO
FOX8 News

A 44-year-old man accused of punching two medical assistants at a vaccination clinic in California and later groping a nurse who was providing him medical care has been charged with misdemeanor battery and resisting arrest.
TUSTIN, CA・7 HOURS AGO
FOX8 News

The program, known as Excel, will start giving $500 a month to formerly incarcerated individuals in March.
DURHAM, NC・1 DAY AGO
FOX8 News

Has omicron peaked in the US?

As case counts start to plateau and drop off in parts of the country, have we already passed the peak of omicron?
PUBLIC HEALTH・1 HOUR AGO