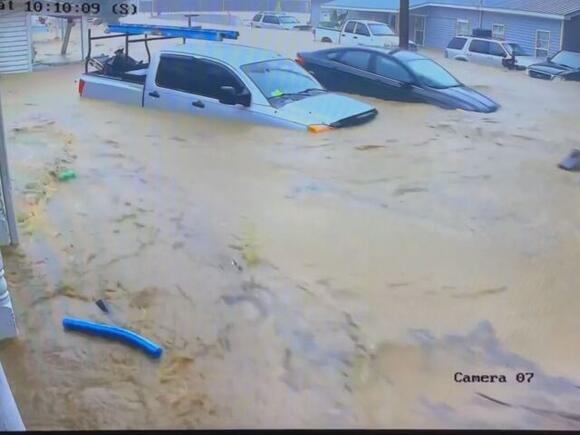 Amid all the destruction, Waverly's Lindsey Daniel still has hope for the weeks to come.

She said she needs something to wash away the trauma of the water surging into her house, while her whole family was stuck in the attic.

"We’re all really for Christmas because we actually know what the true meaning of Christmas is this year," she said.

But for a lot of flooded out families — actually putting presents under the tree — may require a Christmas miracle.

"You know you hate to see anybody go without during the holidays," said Humphreys County Sheriff Chris Davis.

Sheriff Davis said they normally have about 300 families sign up for their angel tree program as recipients. This year is different.

Sheriff Davis said he's already seen examples of the angels among us, stepping up with donations.

"That’s heartwarming. That tells you a little bit about what Waverly’s all about," he said.

But it's going to take a heavenly host of them to make a difference.

"We’re going to make sure everybody gets a little something for the holiday season," Davis said.

As for Daniel, she said she feels like they have enough assistance from family that they can manage on their own.

"I believe there might be other people who need it more so we chose to just do our own thing," Daniel said.

And while presents are nice, all of the gifts in her life are living with her inside the camper parked next to her home, as they recover from the flood.

"I’m thankful that I get to go buy Christmas presents for him and then he gets to open them and that I have my husband and my son here," Daniel said.

Those who are interested can pick up a tag from an Angel Tree at the Waverly Walmart, Dickson Walmart, Trull Pharmacy and Memories and Marmalade in McEwen from now until Friday, December 10.

For those who would like more information or make a monetary donation to the program, call Kim Roberts at (615) 516-8488.

Slaven saved in flooding after clinging to tree for hours

This story was initially run in the Jan. 6 issue of the Community Voice. For access to the latest news and sports, call 270-384-9454 for a subscription. For close to three hours, Annette Slaven clung to a tree, praying and awaiting rescue after her vehicle was washed away in floodwaters early in the morning on New Year’s Day.
ADAIR COUNTY, KY・14 DAYS AGO
WREG

MEMPHIS, Tenn. — Tragedy strikes in southeast Shelby County after a 76-year-old woman was killed by a falling tree. Tonight, we’re hearing from one of the people who called 911 moments after that horrific accident. Monday afternoon, the trunk of a large tree still blocks the sidewalk. Cars once again travel on Lowrance road after […]
MEMPHIS, TN・10 DAYS AGO
wpln.org

In flood-ravaged Waverly, businesses are ‘crawling and clawing’ their way back to normalcy

Piecing a company back together after a disaster is a task that will stretch thin even the most resilient business owners. Just ask Ronnie Harbison, who owns Adaseal International in Waverly. The company is essentially his life’s work. Harbison started the business in 1989 with one employee, one machine and $100,000 to invest. It grew into a small manufacturer that makes silicone sealants for windows and automotive parts.
WAVERLY, TN・1 DAY AGO
thebuzzmagazines.com

On the heels of last year's deadly flood in Waverly, the U.S. Army Corps of Engineers plans to study a Tennessee creek to see if changes could prevent future catastrophes. The U.S. Army Corps of Engineers Nashville District announced Thursday it will conduct a floodplain management services study of Trace Creek. The Corps kicked off the federally-funded study...
WAVERLY, TN・12 DAYS AGO
Marshall Independent

A fire has broken out at Signature Healthcare of Erin in Houston County.
ERIN, TN・5 DAYS AGO
NewsChannel 5 WTVF

Some major changes could come to a tributary of the Duck River, and some residents around it believe it's happening far too quietly.
DICKSON COUNTY, TN・1 DAY AGO
NewsChannel 5 WTVF

No injuries, damage in explosion at Poplar Grove Middle in Franklin

No injuries were reported after an explosion that took place at Poplar Grove Middle School in Franklin Tuesday morning.
FRANKLIN, TN・1 DAY AGO
NewsChannel 5 WTVF

After spending years feeding families in Sumner County, one of Middle Tennessee’s largest food banks could be on their last days unless they find new management.
SUMNER COUNTY, TN・1 DAY AGO