Nashville church will offer those with warrants a place to surrender 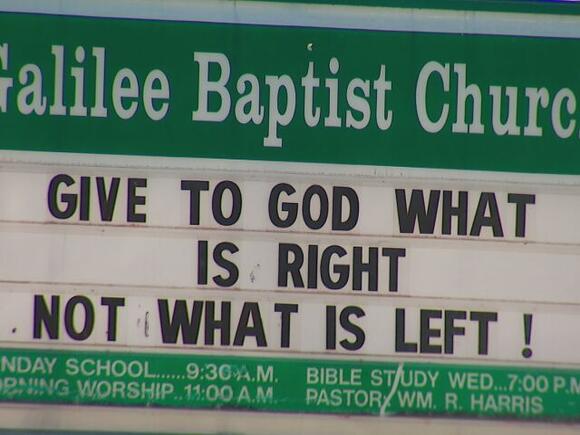 There are thousands of people walking the streets of Nashville with outstanding warrants.

It can be anything from failure to appear in court for a traffic violation to unpaid citations. But there is an effort for those people to come forward peacefully.

Men and women in Davidson County who are wanted for nonviolent crimes will soon be given a special one-time opportunity toward a second chance.

Nashville’s justice system, in partnership with area community leaders, are gearing up for a two-day Nashville Safe Surrender event to be held from 9 a.m. to 5 p.m. on Friday, Dec. 10, and 9 a.m. to 2 p.m. on Saturday, Dec. 11, at Galilee Missionary Baptist Church, 2021 Herman Street.

Pastor William Harris of Galilee Missionary Baptist Church says serving the community is not a 9-5 job.

"You must understand that we’re 24/7 pastors, we’re never off," Harris said.

Several Nashville pastors teamed up to help do what they are called to do and lead those who strayed a way back on a path toward a second chance.

There are about 33,000 active warrants in Davidson County.

"Of course, coming here, ministers and volunteers of the community, it’s a safer and more comfortable environment than going downtown to a courtroom with court officers," Joyner said.

Those who choose to surrender could even avoid jail time if they show up on the dates of the event.

"They don't sit in jail or have your hearing within a certain period of time, 10 days 15 days waiting on their time to appear in court," said Judge Steve Dozier.

Organizers say those who show up at the church to surrender will be processed — able to speak with an attorney and appear before judges like Dozier and Lynda Jones either from the Criminal or General Sessions Courts.

"Some of those warrants are five or six years old. And witnesses are long gone, or it was a false allegation, to begin with. We really just want to clean this up and I want our justice system to be fair for everyone. And it'll work better for everyone if people come forward," said Jones.

Nashville hosted a two-day Safe Surrender event in September 2015, which saw a total of 86 persons come to Galilee Church to receive special consideration to begin resolving their outstanding criminal charges. Those 86 persons were named in a total of 133 outstanding warrants.

Nashville hosted a four-day Safe Surrender event in conjunction with a nationwide effort advocated by U.S. Marshal’s Service in August 2007, during which 561 persons peacefully and voluntarily surrendered themselves at Galilee Church.

A shooting took place early this morning at a Clarksville Waffle House. The incident left two injured and one other individual was airlifted to Nashville.
CLARKSVILLE, TN・1 DAY AGO
NewsChannel 5 WTVF

Teen attendance drops at 'gentlemen and not gangsters' class

Attendance is waning at an anti-crime class for teens at a local church.
NASHVILLE, TN・3 DAYS AGO
NewsChannel 5 WTVF

Travis Reinking, the man accused of opening fire at an Antioch Waffle House in 2018, appeared in court on Monday for a motions hearing a day before jury selection is set to begin.
DAVIDSON COUNTY, TN・4 HOURS AGO
NewsChannel 5 WTVF

The Tennessee Bureau of Investigation has been called to look into the death of Robertson Co. patrol deputy Savanna Puckett.
ROBERTSON COUNTY, TN・13 HOURS AGO
NewsChannel 5 WTVF

A man is facing charges after being accused of criminal actions that led to an officer involved shooting in Sullivan County.
SULLIVAN COUNTY, TN・2 DAYS AGO

Teen who fatally shot his half-brother in custody

A teen who fatally shot his half-brother Thursday night is in custody.
NASHVILLE, TN・2 DAYS AGO
NewsChannel 5 WTVF

A fire has broken out at Signature Healthcare of Erin in Houston County.
ERIN, TN・3 DAYS AGO
NewsChannel 5 WTVF

How the Black Book Project's mission is to collect more books

Meredith McKinney is on a mission to fundraise and collect children's books with Black characters, so minority students can see themselves in the stories they read.
NASHVILLE, TN・3 DAYS AGO

Tenn. teen with leukemia pleads with public to donate blood

A teen with leukemia receiving treatment at Monroe Carell Jr. Children's Hospital at Vanderbilt is asking the community to make time to give blood.
TENNESSEE STATE・5 DAYS AGO
NewsChannel 5 WTVF

Students across Vanderbilt University say it’s too early to return to campus with the omicron variant showing no signs of slowing down.
NASHVILLE, TN・4 DAYS AGO
NewsChannel 5 WTVF

Lawmakers have filed a bill to provide respite care for people with Alzheimer's or dementia in Tennessee.
TENNESSEE STATE・4 DAYS AGO
NewsChannel 5 WTVF

While the U.S. government has launched its website allowing each household to request four free at-home COVID tests, local pharmacies say the launch of that program is causing challenges for their customers who need the hard-to-find at-home tests immediately.
NASHVILLE, TN・5 DAYS AGO
NewsChannel 5 WTVF

Man charged with shooting sister during argument in Nashville

A man was charged after reportedly shooting his sister multiple times during an argument at their East Nashville home.
NASHVILLE, TN・6 DAYS AGO
NewsChannel 5 WTVF

Its been a challenging two years for those in the Arts and entertainment industry as they try to bounce back during the pandemic. The Nashville Symphony is one of them and the president and CEO who is asking for your help in making sure the music continues to play.
NASHVILLE, TN・5 DAYS AGO
NewsChannel 5 WTVF

A controversial judge out of Rutherford County is seeking reelection, but state legislators say she’s not fit to serve.
RUTHERFORD COUNTY, TN・6 DAYS AGO
NewsChannel 5 WTVF