White House rep. witnesses Oklahoma’s Afghan resettlement efforts; how the state could set tone for rest of US

By Hunter McEachern/KFOR
KFOR
10 days ago 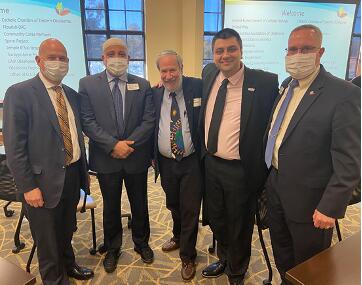 Markell visited Catholic Charities of the Archdiocese of Oklahoma City, the only refugee settlement agency in the state.

The goal of Markell’s November 18 visit was to learn more about the best practices for Afghan refugees by state, city and community organizations.

First Afghan refugees arrive in Oklahoma: Here’s what we know from a volunteer who greeted them at the airport

“I’m grateful to Catholic Charities for their monumental work to welcome our Afghan allies as our neighbors and provide support as they start their new lives,” said Markell. “The community in Oklahoma City is approaching resettlement with the creativity and dedication to service that makes historic moments like this possible.”

So far, 347 Afghan refugees have arrived in Oklahoma City since September 22. It is expected that 50 families will be arriving per week through February.

Oklahoma will receive the 3rd highest number of Afghan refugees coming to the United States; Here’s what resources will be available to them

“Just imagine the lives that you are changing. Ten years from now these kids are going to be fully integrated into their American schools or they’ll be working, and they’re going to look back and they will know it will be because of your work that the American dream could be just as real to them as it was for generations and generations before us,” said Markell.

Markell was then taken to an undisclosed hotel where the newest Afghan evacuees were staying temporarily. This gave Markell the opportunity to meet with one of the families who had been resettled by Catholic Charities and witness firsthand the cultural orientation and activities provided.

The remainder of Markell’s visit was with Catholic Charities to discuss housing solutions, a lunch with resettlement staff and a listening session with local and state stakeholders.

Some of the topics covered during those conversations include the need for permanent housing for refugees, welcoming efforts, employment, legal services, cultural challenges and refugee responses.

Later that afternoon, Markell met privately with a group of local veterans who had been deployed to Afghanistan to gauge their thoughts on how the integration back into a thriving society is being addressed.

Markell will continue traveling to cities nationwide over the next couple of weeks.

Hyping up Afghans moving here is not cool. They don't plan on assimilating. There's absolutely no reason to be excited about an influx of these foreigners.

set the tone by putting these afghanis on the end of our boots they'll all go to live in slums in NYC and La soon enough. Then they can do as they please child marriages, FGM,honor killings beating and killing women and all the rest of their savagery as they are doing in those cities now. Not so easy to do these things in Oklahoma. Their own microcosm of Afghanistan.just what we don't need anymore of.

Today, the State of Oklahoma filed a lawsuit against the Biden Administration to stop its mandatory COVID-19 vaccination requirement for federal employees and the National Guard.
OKLAHOMA STATE・1 DAY AGO
KFOR

More than 65 million American women would immediately lose access to an abortion in their home states if the U.S. Supreme Court strikes down the landmark case that established the right to seek the procedure nearly half a century ago.
OKLAHOMA CITY, OK・1 DAY AGO
KFOR

What’s the status of the COVID vaccine mandate?

To control the spread of COVID-19, President Joe Biden previously said businesses with 100 or more employees would need to require COVID-19 vaccination or have workers get tested weekly for the virus.
OKLAHOMA CITY, OK・3 HOURS AGO
KFOR

New York Gov. Kathy Hochul is advising anyone who attended a recent anime convention in New York City to get tested for COVID-19 immediately.
NEW YORK CITY, NY・1 DAY AGO

A knack for trapping and social media: Business is booming for Oklahoma’s Gopher Girl

The gophers she traps are the unwitting co-stars in a unique string of selfies she shares on social media.
OKLAHOMA COUNTY, OK・21 HOURS AGO
KFOR

Oklahoma State University is among the first institutions to receive a sizable grant through the Federal Aviation Administration Reauthorization Act of 2018.
OKLAHOMA STATE・20 HOURS AGO
KFOR

U.S. Senator James Lankford of Oklahoma called for a vote on an amendment he introduced that would prohibit the Department of Defense from discharging or withholding pay or benefits from National Guard members over their COVID–19 vaccination status.
CONGRESS & COURTS・2 DAYS AGO
KFOR

Officials say Independent voters in Oklahoma will be allowed to vote in the Democratic primaries in 2022 and 2023.
OKLAHOMA CITY, OK・1 DAY AGO

The Senate has passed a stopgap spending bill that avoids a short-term shutdown and funds the federal government through Feb. 18 after leaders defused a partisan standoff over federal vaccine mandates. The measure now goes to President Joe Biden to be signed into law.
OKLAHOMA CITY, OK・1 DAY AGO
KFOR

OSDH: New COVID-19 cases, hospitalizations on the rise in Oklahoma

Officials reported an additional 50 deaths from COVID-19 in Oklahoma on Friday.
OKLAHOMA STATE・1 DAY AGO
KFOR

The Oklahoma City-County Health Department is celebrating after administering more than 1 million COVID-19 doses in the county.
OKLAHOMA CITY, OK・1 DAY AGO

Colorado became the third U.S. state to detect a case of the omicron variant in a woman who had recently traveled to Africa, state health officials announced Thursday.
COLORADO STATE・2 DAYS AGO
KFOR

Former Vice President Mike Pence said he believes he “did the right thing” when he certified the results of the 2020 presidential election in January, ignoring then-President Trump’s repeated requests that he object to the vote.
PRESIDENTIAL ELECTION・2 HOURS AGO
KFOR

Hawaii resident with omicron had no travel history, officials say

Hawaii health officials confirmed the first case of the omicron variant in a resident who hadn't traveled outside of the state.
HAWAII STATE・1 DAY AGO