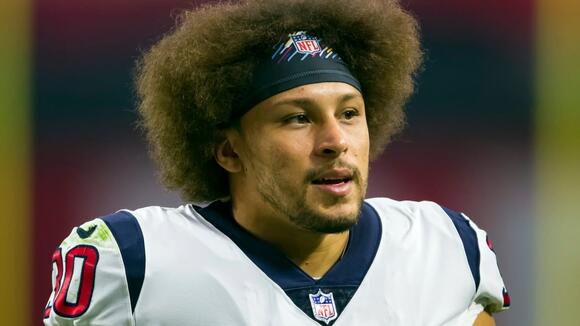 Former Pro Bowl running back Phillip Lindsay was cut by the Houston Texans. Can the Falcons afford him? Would they want him?

The Atlanta Falcons running game has struggled mightily this season. The Falcons rank 30th in the NFL in rushing yards per game at just 78.6.

Much of the blame lies with the Falcons offensive line, but would a different running back help as well?

Former Pro Bowl running back Phillip Lindsay was cut by the Houston Texans on Tuesday.

The 27-year old Lindsay was originally signed as an undrafted free agent out of Colorado in 2018. Remarkably, Lindsay was selected to the Pro Bowl his rookie season after rushing for 1,037 yards and nine touchdowns on just 192 carries.

Lindsay backed his rookie season with another 1,000-yard season in 2019 with 1,011 yards and seven touchdowns.

The Broncos weren't convinced that their back-to-back 1,000-yard running back was the main man in Denver, so they signed free agent running back Melvin Gordon to a two-year, $16 million contract in 2020.

Gordon led the Broncos in rushing in 2020, while Lindsay saw his production drop to just 501 yards on 118 carries.

Lindsay moved after the 2020 season to the Houston Texans, and the Broncos traded up with the Falcons in the second round to take running back Javonte Williams.

The Falcons signed running back Mike Davis to a two-year contract before the start of this season, but he has been a disappointment with just 290 yards and a touchdown as the starting running back.

To be fair, it's hard to get a full read on Davis with the Falcons considering he's usually having to break a tackle in his own backfield because of the Falcons porous offensive line.

One of the questions that is always asked when a player becomes available is, "Can the Falcons afford him?''

If the Falcons claimed Lindsay, they would owe him a pro-rated portion of his $2.25 million base salary, or roughly $926,000. That figure is one of the few that falls in line with what the Falcons can spend and stay under the salary cap (unlike the pipe-dream when Odell Beckham Jr. was cut from the Browns).

Davis' contract is structured so that it wouldn't be cost prohibitive to move on from him in 2022, but would Lindsay be an upgrade?

The Broncos didn't think so.

We say if the Falcons are in the mood to spend, they would be better off bargain-shopping for help on the offensive line.

Could either Bulldog stay home and become a Falcon next season?
NFL・1 DAY AGO
Sportsnaut

Von Miller and Demaryius Thomas were teammates with the Denver Broncos for the better part of eight seasons. Thomas found
NFL・2 DAYS AGO
Falcon Report

Should the Atlanta Falcons target Ryan’s replacement in the draft?

Matt Ryan’s time with the Atlanta Falcons is closer to the end than the beginning, this we know as the veteran heads into his age 37-season. Sitting with the 8th overall pick in the draft Atlanta has to at least consider whether or not it is time to take a quarterback.
NFL・2 DAYS AGO
Falcon Report

Cordarrelle Patterson is a free agent, and Mike Davis might not be back. Here's a look at five running backs the Atlanta Falcons could target in free agency.
NFL・2 DAYS AGO
sportstalkatl.com

The Falcons are set to experience an incredible amount of roster turnover. Atrittion is natural in the NFL, but Terry Fontenot exclusively handed out one-year deals — outside of Mike Davis — last spring. Particularly on the defensive side of the ball, Atlanta might have to replace a bevy of starters.
NFL・1 DAY AGO
FanSided

The Atlanta Falcons should target Odell Beckham Jr. this off-season

The Atlanta Falcons are dealing with a myriad of questions at the receiver position this off-season. The biggest question is whether or not Calvin Ridley will be able to return ot the team? If he doesn’t Atlanta will have extra cap space and a clear need to target a number one receiver.
NFL・1 DAY AGO

Two things can be true Antonio Brown is one of the greatest receivers to ever step on a football field and also one of the biggest team disrupters in football history. With the Atlanta Falcons desperate at the receiver position and in need of a playmaker Brown has to become at least a momentary consideration.
NFL・19 HOURS AGO
Falcon Report

The Falcons must make a decision on their backup tight end.
NFL・13 HOURS AGO
Falcon Report

Who could the Atlanta Falcons add through free agency to upgrade right tackle?
NFL・14 HOURS AGO
Falcon Report

Watch all the highlights of Kyle Pitts’ historic rookie season with the Atlanta Falcons.
NFL・1 DAY AGO

'I would not be surprised at all to see WR Calvin Ridley dealt to the New England Patriots this offseason,' says NFL insider
NFL・14 HOURS AGO
The Spun

Ben Roethlisberger’s NFL career came to a close on Sunday night with the Steelers’ 42-21 loss to the Chiefs. The Steelers started out the game strong (at least defensively) before giving up 21 points in the final six minutes of the second quarter. With how the Steelers offense...
NFL・2 DAYS AGO
CBS Sports

Troy Aikman slams Cowboys for CeeDee Lamb's role in wild card loss to 49ers: 'The game is not that difficult'

Troy Aikman knows a thing or two about winning with a star wide receiver, capturing three Lombardi Trophies during an 11-year run alongside Michael Irvin in Dallas. And the legendary former Cowboys quarterback isn't happy with the way America's Team used -- or, rather, misused -- No. 1 target CeeDee Lamb in the club's wild card loss to the 49ers. Joining 96.7 The Ticket on Wednesday, Aikman suggested the Cowboys hurt themselves by overthinking Lamb's role in the postseason.
NFL・17 HOURS AGO
Sportsnaut

The 2021 NFL Rookie of the Year candidates are settled. Ja’Marr Chase put past drop issues to bed long ago
NFL・16 HOURS AGO
Sportsnaut

The 2021 NFL regular season is over and playoffs are in full swing, which brings us to one of our
NFL・15 HOURS AGO
ClutchPoints

Mac Jones may have failed to lead the New England Patriots past the Wild Card round, but there is no doubt he has made huge strides in his rookie season and made everyone proud–including his girlfriend Sophie Scott. A couple of days after Jones and the Patriots lost to...
NFL・1 DAY AGO
The Spun

Los Angeles Rams offensive tackle Aaron Donald couldn’t care less about what Tom Brady achieved during the 2021 regular season or even throughout his career. As the Rams gear up for their divisional round showdown with the Tampa Bay Buccaneers, Donald made sure to remind Brady and everyone else that the regular season and past achievements don’t matter that much in the postseason.
NFL・1 DAY AGO