Ex-Kansas officer who sued sheriff's deputy is killed by police 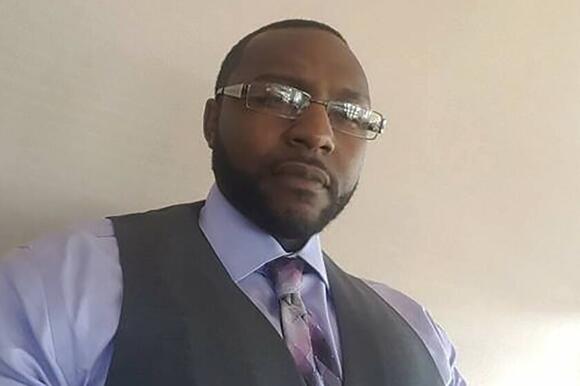 A former Kansas police detective, who last year sued a sheriff's deputy for running over him in a rural field, has been fatally shot by a police officer in Kansas City after disarming another officer and pointing the service weapon at both of them, police said Tuesday.

Lionel Womack was killed during the encounter Monday after police received 911 calls about a man standing in a road pointing at the sky and trying to jump in front of traffic.

“Those officers had no choice — this whole incident took place in 26 seconds," Police Chief Karl Oakman said at a news conference.

When officers arrived, Womack started running toward them in “an aggressive manner," Oakman said, adding that the entire encounter was captured on police body camera and dashcam video.

Womack attempted to get into the passenger side of the police car, then ran around the vehicle, where he came into contact with an officer. Womack reached toward the back of his pants and the officer — assuming he had a gun — drew his weapon, Oakman said. Womack then got into the driver's seat of the patrol car, and the same officer tried to get him out.

A fight ensued over the officer's weapon, which discharged two shots. Womack successfully disarmed the officer and pointed the weapon at that officer before then pointing it at the other officer, who shot and killed Womack. In the video, one officer can be heard saying to the other, “Man, you just saved my life,” the police chief said.

“He knows our tactics,” Oakman said. “I think that contributed to his ability to disarm our officer, which made it a very dangerous situation for our officers.”

Womack was hired by the Kansas City, Kan., police department in 2007, promoted to detective in 2018, and terminated in August 2020 after numerous policy violations and conduct issues, the police chief said.

“We don't know what happened in his life that caused him to spiral like this,” Oakman said.

Lionel Womack came from a law enforcement family. His wife and mother are police officers in Kansas City, Kan., and his stepfather is a retired police sergeant. Two aunts are city police dispatchers.

His wife, Zee Womack, tearfully told the Associated Press that her husband was killed in the altercation and that at least one of the officers involved knew him. She declined to comment further because she is still employed as a Kansas City police officer, and the investigation is ongoing.

Lionel Womack alleged last year in an excessive force lawsuit that Kiowa County Sheriff’s Deputy Jeremy Rodriguez intentionally drove over him on Aug. 15, 2020, in an incident that was captured on dashcam video . The deputy has denied the allegations and said he’s entitled to qualified immunity.

“The family of Lionel Womack thanks the members of the Kansas City community for your outpouring of support after their devastating loss yesterday,” said Michael Kuckelman, the attorney representing him in that lawsuit. “They are asking for privacy and your prayers, as they grieve.”

Police spokesman Thomas Tomasic said, “We were all friends with the guy,” adding that everybody knew him and nobody had a problem with him. He said officers didn't know the 911 calls involved Womack until they arrived at the scene.

He said there was no connection between the Kiowa County case and Monday's confrontation.

“He was a nice guy. He used to always come to the office and talk to us,” Tomasic said. “It is very weird. It is horrible. We don't like to kill anybody. We obviously don't want to kill somebody you work with for however many years.”

Sounds like ANOTHER set up!!! when you think you got away with it!!! God seen it ALL!! The whole plan and EVERY THING!!

a good investigation needed....alot of contradiction in the story.... Taser Taser Taser

He was probably, HARASSED, the whole time day and night and he had enough of it!

More than a month into a search for the person who beheaded a Kansas police officer’s puppy, another dog has been found dead. It is the fourth dog to be attacked and the third to die in the past year in Parsons, a southeastern Kansas town of fewer than 10,000 people, according to the last census.
PARSONS, KS・13 DAYS AGO
Shore News Network

INVERNESS, FL – On January 14, 2022, at approximately 9 P.M., deputies responded to a residence in the area of East Dawson Drive, Inverness, FL in reference to a shooting. Upon arrival, deputies observed a victim with apparent gunshot wounds lying on the driveway. Shortly thereafter, EMS arrived and began treating the victim. Subsequently, the victim was air-lifted to Marion County for medical treatment and was later pronounced deceased at the hospital. Witnesses told deputies the suspected shooter tried to break into their home before he fled on foot. Through witness statements, deputies were able to identify the suspect as 29-year-old Daniel Arthur Redman, who was just released from prison on January 9, 2022.
INVERNESS, FL・10 DAYS AGO
Los Angeles Times

Man who shot two NYPD officers, killing one, has died

The man who shot two New York City police officers in a Harlem apartment, killing one of them and leaving another in critical condition, died Monday of injuries sustained when a third officer shot him
NEW YORK CITY, NY・1 DAY AGO
WCTV

WICHITA, Kan. (KAKE) - A 26-year-old man led authorities on a chase before shooting at deputies and barricading himself in a west Wichita hotel room, the Sedgwick County Sheriff's Office says. The Sedgwick County Sheriff's Office identified the 26-year-old man as Kory Anziana of Wichita. Anziana was arrested and booked...
WICHITA, KS・1 DAY AGO
The Daily Times

Matilda Clah, Shawn Thomas’ mother, on Jan. 6 filed lawsuits against the sheriff’s office and San Juan County Board of Commissioners. Thomas’ mother accuses the deputies of wrongful death, negligence and violation of her son’s civil rights in the July 11 incident, according to the lawsuits.
FARMINGTON, NM・10 DAYS AGO
WHIO Dayton

Ex-Chicago officer who killed Laquan McDonald to be released

CHICAGO — (AP) — The white Chicago police officer whose fatal shooting of Black teen Laquan McDonald put the city at the center of a national debate about race and law enforcement is set to be released from prison next month after serving less than half of the 81-month sentence imposed three years ago.
CHICAGO, IL・7 DAYS AGO

YUBA CITY (CBS13) — Two Yuba City police officers suffered minor injuries in a violent crash that occurred during a chase, authorities said Monday. (credit: California Highway Patrol Yuba-Sutter) According to California Highway Patrol Yuba-Sutter press release Monday afternoon, the officers responded to a pursuit of a stolen truck. The driver of the truck reportedly tried to ram another patrol car that also responded. At some point during the chase the front-end of the two injured officers’ vehicle collided with an uninvolved car, the CHP said. The driver of that car also suffered minor injuries despite the severity of the vehicles’ damage. Authorities have not yet released further information on the stolen truck and following events.
YUBA CITY, CA・1 DAY AGO
uticaphoenix.net

A Georgia sheriff’s deputy called Ahmaud Arbery a ‘criminal’ who

In February 2020, Arbery, a 25-year-old Black man, was jogging through the Satilla Shores neighborhood in Brunswick, Ga. — about 150 miles from Houston County — when three men chased him in pickup trucks for about five minutes and one killed him with a shotgun. The murder sparked nationwide outrage and protests months later when video of the shooting leaked online.
BRUNSWICK, GA・4 DAYS AGO
wbrc.com

BALTIMORE (WJZ) — Police in New York City are still trying to trace a Glock 45 handgun with an extended 40-round magazine, which they said LaShawn McNeil obtained in Baltimore and used to shoot two officers in Harlem on Friday night. Police believe the weapon was stolen in 2017. Below is a picture of the gun used to shoot our officers. pic.twitter.com/TkcMR2tr83 — NYPD NEWS (@NYPDnews) January 22, 2022 Investigators later located an AR-15 assault rifle under McNeil’s mattress. A day after Officers Rivera and Mora were shot in Harlem, your NYPD detectives were still on the scene executing a court-authorized search which lead to...
BALTIMORE, MD・1 DAY AGO
WIBW

LAWRENCE, Kan. (WIBW) - The Douglas Co. Sheriff’s Office is searching for a man who led deputies on a high-speed chase through Lawrence in December. The Douglas County Sheriff’s Office says in a Facebook post on Wednesday, Jan. 12, that Tyrone “Ty” Leroy Alexander, 48, of Baldwin City, is wanted for outstanding probation violation warrants out of Douglas Co.
LAWRENCE, KS・13 DAYS AGO
We Are Iowa

SERGEANT BLUFF, Iowa — A man is dead after a Woodbury County Sheriff's Office deputy shot and killed him Wednesday evening after he struck the deputy with a tire iron, according to the Iowa Division of Criminal Investigation (DCI). The DCI said two deputies responded to the Woodford Mobile...
WOODBURY COUNTY, IA・12 DAYS AGO
Laredo Morning Times

Houston police on Monday said they believe they know the identity of the driver who shot and killed a deputy constable during a late-night traffic stop over the weekend — and are asking the community's help in finding him. Oscar Rosales, 51, will be charged with capital murder and...
HOUSTON, TX・1 DAY AGO
sacramentoinjuryattorneysblog.com

A fatal car accident took place on River Road near the Newman area on the morning of Sunday, January 9, 2022. The traffic collision occurred at Villa Manucha Road and River Road around 7:10 a.m. Two vehicles involved in the crash were described as a 2015 Chevrolet coupe and a 2019 Nissan sedan that was utilized by officials as an undercover vehicle.
STANISLAUS COUNTY, CA・14 DAYS AGO
KXLY.com | 4 News Now

The Kootenai County Sheriff's Office said shots were fired by both Garrett Stevenson, 23, and deputies. The sheriff's office did not say whether or not Stevenson was shot by investigators. No deputies were hurt.
KOOTENAI COUNTY, ID・14 DAYS AGO