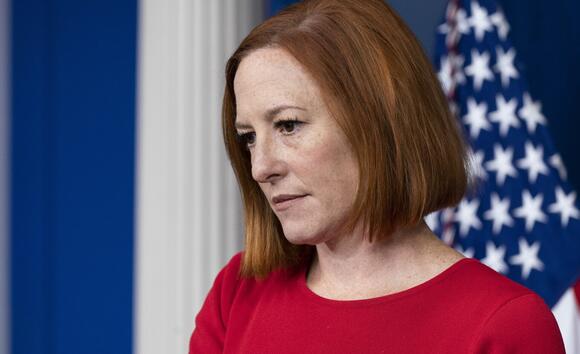 White House press secretary Jen Psaki distanced President Joe Biden from past comments he made alluding to Kyle Rittenhouse, suggesting to reporters at Tuesday's briefing that when Biden compared Rittenhouse to white supremacists on the campaign trail, he was really denouncing former President Donald Trump.

Rittenhouse, found not guilty by a jury on all charges related to multiple shooting deaths at a 2020 protest in Kenosha, Wisconsin, has said in recent interviews that he believes Biden had maliciously defamed his character.

"Well, let's be clear what we're talking about here. This is about a campaign video released last year that used President Trump's own words during a debate as he refused to condemn white supremacists and militia groups, and President Trump, as we know from history, and as many of you covered, didn't just refuse to condemn militia groups on the debate stage — he actively encouraged them throughout his presidency," Psaki said in response to a question on the subject. "So, you know, what we've seen are the tragic consequences of that when people think it's OK to take the law into their own hands, instead of allowing law enforcement to do its job, and the president believes in condemning hatred, division, and violence. That's exactly what was done in that video."

A reporter noted to Psaki that Biden also claimed during a televised interview that Rittenhouse "was part of a militia coming out of Illinois."

"The president spoke to the verdict last week. He has obviously condemned the hatred and division and violence we've seen around the country by groups like the Proud Boys and groups that that individual has posed in photos with," she responded. "Beyond that, I'll leave it to his comments around the verdict."

You can watch Tuesday's entire briefing below.

There's a lot of videos of Biden calling Rittenhouse a white supremacist and saying he should be locked up for life and the key thrown away, there's no spin on those comments from Biden that Psaki can put on it to make it go away. He said it now he should make an apology to Rittenhouse since He was found not guilty by a jury of his peers.

So here we go again... IT'S TRUMP'S FAULT...Well guess what sleepy joe everyone remembers what you said...he compared that kid to white supremacists.. IT'S ON YOU JOE...

They can back away all they want...The young man has just served notice on Biden! It’s sad and comical at the same time. Ole Joe will have to pay millions for trying to influence his jury during the trial! Those Democrat propaganda outlets are in the young mans lawyers cross hairs too!

Pence says he hasn't spoken to Trump since last summer

Former Vice President Mike Pence says that he has not talked to former President Donald Trump since last summer.
POTUS・22 HOURS AGO
WashingtonExaminer

Eight states have sued the Biden administration for restarting an Obama-era program that allows migrants who illegally crossed the border to petition that their children or relatives be able to join them in the United States.
PRESIDENTIAL ELECTION・17 HOURS AGO
Fox News

Former Vice President Mike Pence said Thursday it is clear that his successors, President Joe Biden and Vice President Kamala Harris are picking up where Barack Obama left off in fundamentally transforming the American system into one that is hard-left. Pence also reacted to Harris' trip to Honduras to visit...
PRESIDENTIAL ELECTION・1 DAY AGO

Poll: Biden would beat Trump, lose to generic Republican in 2024

WASHINGTON (TND) — In a video shared on social media this week, a golfing former President Donald Trump joked about being “the 45th and 47th” president of the United States. Although Trump has made no definitive announcements about his future plans, he continues to publicly hint at...
PRESIDENTIAL ELECTION・19 HOURS AGO
mediaite.com

White House Press Secretary Jen Psaki slammed Republicans who are critical of President Joe Biden’s still-unannounced replacement for Justice Stephen Breyer on the Supreme Court. Breyer officially announced on Thursday that he is stepping down after three decades on the bench. Biden also stated that he intends to announce...
CONGRESS & COURTS・1 DAY AGO
mediaite.com

Nikki Haley Mocked For Calling on Biden and Harris to Resign: ‘Angling For President Pelosi?’

Former governor and UN Ambassador Nikki Haley ended up on the wrong side of the Twitterverse on Thursday after comments she made calling on President Joe Biden and Vice President Kamala Harris to “step down” went viral. “If Biden loved our country, he would step down and take...
PRESIDENTIAL ELECTION・1 DAY AGO
Newsweek

"The Biden Administration has sown nothing but disaster for our country through its illegal, unconstitutional immigration policies," wrote Ken Paxton of Texas.
PRESIDENTIAL ELECTION・15 HOURS AGO

Tucker Carlson claimed Thursday that President Joe Biden’s promise to choose a Black woman for the next Supreme Court justice won’t take into account “intelligence” and other key factors. (Watch the video below.) The Fox News host has been apoplectic since the president confirmed he would...
U.S. POLITICS・21 HOURS AGO
Fox News

White House press secretary Jen Psaki's appearance on MSNBC Thursday wasn't the normal friendly affair as she clashed with left-wing host Mehdi Hasan. During an appearance on "The 11th Hour," Psaki was pressed by Hasan over the timeline of Biden's decision to change his mind and openly support the idea of changing the Senate filibuster, with the latter relentlessly questioning Psaki as to why it took so long for him to complete his turn on the issue.
POLITICS・17 HOURS AGO
mediaite.com

White House Press Secretary Jen Psaki had to fend off waves of questions about what President Joe Biden will do in light of Justice Stephen Breyer’s retirement from the Supreme Court. Psaki held her daily press briefing on Wednesday hours after news broke that the senior left-leaning justice will...
CONGRESS & COURTS・2 DAYS AGO
Newsweek

The new poll also showed that Trump was trailing President Joe Biden in a rematch of the 2020 election.
PRESIDENTIAL ELECTION・1 DAY AGO

Poll: Nearly 6 in 10 Republicans say they will not vote for any candidate who admits Biden won 'fair and square'

Despite a mountain of evidence showing the 2020 presidential contest wasn’t rigged against Donald Trump, nearly 6 in 10 Republicans and Republican-leaning independents (57 percent) now say they will not vote in upcoming elections for any candidate who admits that Joe Biden won the presidency "fair and square." Only...
PRESIDENTIAL ELECTION・1 DAY AGO
MSNBC

Ask Republican leaders on Capitol Hill about this year's midterm elections, and they'll likely answer by talking about the present and the future. Ask GOP candidates trying to break through in competitive primary campaigns the same question, and you'll probably hear answers about the recent past. In Arizona's U.S. Senate...
PRESIDENTIAL ELECTION・21 HOURS AGO
Business Insider

"Stated simply, the primary takeaway from the past 250 years of recorded American history is that Presidents are not kings," Judge Ketanji Brown Jackson wrote in 2019.
PRESIDENTIAL ELECTION・2 DAYS AGO

"If all Democrats hang together ... they have the power to replace Justice Breyer in 2022 without one Republican vote in support," Graham said.
CONGRESS & COURTS・2 DAYS AGO
Business Insider

If "we get past these Olympics and we still look weak," China will "do whatever they want because they can," Haley said in a Fox News Radio interview.
SPORTS・1 DAY AGO
The Independent

One of the Republican Party’s most controversial top-tier Senate candidates has reported spectacular fundraising returns, further raising his profile even as some worry he could hurt the party’s chances of retaking the upper chamber.Herschel Walker, who is challenging freshman Georgia Senator Raphael Warnock, pulled in some $5.4m in donations over the last quarter of 2021, a sum that vaults him to the very top ranking of Senate fundraisers this cycle.A former NFL player, Mr Walker was endorsed by Donald Trump last October, and since then has attracted the support of many other top Republicans, including Mitch McConnell and other...
PRESIDENTIAL ELECTION・2 DAYS AGO
Business Insider

"I think it's going to be awfully difficult for the Republicans, after setting that precedent, to stretch things out," the Vermont Democrat told CNN.
VERMONT STATE・1 DAY AGO