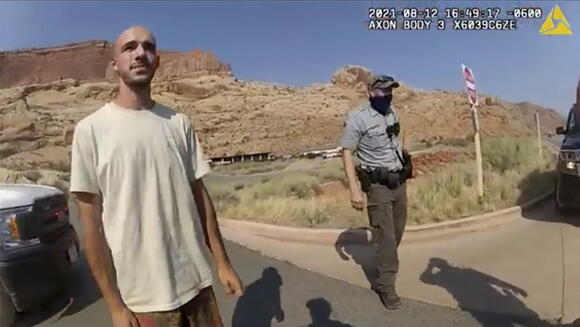 The family of Gabby Petito has said it is waiting to see if other individuals are charged over their daughter’s murder, after it was reported the suspect in her death had shot himself in the head.

A lawyer for the family of Brian Laundrie, whose remains were recovered from a Florida nature reserve last month, said a post-mortem examination had concluded the 24-year-old had died after shooting himself in the head with a gun.

Laundrie had been named as a “person of interest” by the FBI in the disappearance and killing of the 22-year-old woman, whose case triggered global attention.

Yet, no formal charges were ever brought against him or anyone else.

On Tuesday, the family for the young woman, originally from Long Island, in New York State, said it had been asked not to comment on the latest developments by the FBI, as it continued its investigation into the case.

The sad, twisting saga of Gabby Petito and Brian Laundrie – and what it tells us about America

“The Schmidt and Petito family has been aware of the circumstances surrounding the suicide of the sole suspect in Gabby’s murder,” said a statement provided to The Independent by a family friend.

“Gabby’s family will not be making a statement at this time due to the request of the United States Attorney’s Office and the Teton County Prosecutor’s Office.”

The statement added: “The family was asked to not comment and let the FBI continue their investigation and allow the US Attorney’s Office make a determination on whether any additional individuals will be charged.”

Laundrie’s suspected remains were found on Oct 20 at Florida’s Carlton Reserve, close to the home he and Petito shared in North Port. The day after, officials confirmed they belonged to the young man, who had set off with the young woman in a white Ford Transit van, with a plan to visit some of America’s national parks.

When he and the van returned, but there was no sign of the young woman, her parents alerted the authorities. Barely a week later, on September 19, her remains were found at the Spread Creek campsite, 20 miles north of Jackson Hole, Wyoming. It was located in the Grand Teton National Park.

A subsequent examination confirmed the remains were those of the young woman and that she had died as the result of a homicide. Further tests showed she had been strangled to death.

It added: “Chris and Roberta are still mourning the loss of their son and are hopeful that these findings bring closure to both families.”

Where is the weapon? Wouldn’t it be right next to him? Wouldnt the coroner’s office be able to tell this? Not adding up in my brain

I smell "cover up"😠 where's the gotdamn weapon? "if" supposedly he shot himself. no matter what, the gun should've definitely been right there and then were he shot himself, either "still in his hand" or lying right by his body😠

his parents have him stashed away letting him grow his hair out. There is to many holes in the whole story and with daddy being a retired police officer and momma working in the court system just tell the Truth it will set you free

A father whose 12-day-old baby was killed by the family pet has admitted to being in charge of a dangerously out-of-control dog.Elon Jase Ellis-Joynes was mauled to death by the Chow Chow cross at his home in Doncaster in September 2020.Dad Stephen Joynes, 36, admitted the offence under the Dangerous Dogs Act during a hearing at Sheffield Crown Court on Thursday.Mother Abigail Ellis, 28, has denied the same charge and will appear at court again on 11 February when prosecutors will make a further decision on the case. A trial is provisionally set for July.The couple were both released on...
PUBLIC SAFETY・24 DAYS AGO
The Independent

A Utah man has been arrested for kidnapping, holding a woman captive and assault after he was accused of keeping her for several weeks at his home and “carving” a number six on her left hand to signify she had six months to “love him or be killed”.Ramone Marcio Martinez, 39, was arrested and charged in Salt Lake County on Wednesday for aggravated kidnapping and five counts of aggravated assault, according to a police booking affidavit cited by local news network KSL 5 TV.The suspect identified himself as a millionaire to the authorities, according to the affidavit.The woman had...
PUBLIC SAFETY・12 DAYS AGO
MyStateline.com WTVO WQRF

Brian Laundrie has been reportedly making public sightings in the past months, causing people to urge the authorities to arrest him. It has been evident already that the skeletal human remains found in the Carlton Reserve were those of Laundrie following autopsy and anthropologist's tests. This still made the fugitive a person of interest in Gabby Petito's disappearance despite his death.
PUBLIC SAFETY・12 DAYS AGO

Laundrie Family Attorney Steven Bertolino Says The FBI Has Not Revealed If Anything Important Was Found In Brian's Notebook, Or If It's Legible

Brian Laundrie's notebook is still a mystery. As previously reported by OK!, his parents, Chris and Roberta Laundrie, are not in possession of the journal that was found near their late son's remains in the Carlton Reserve in Florida. Their attorney, Steven Bertolino, insisted the grieving parents are not aware of the contents of the notebook.
FLORIDA STATE・10 DAYS AGO
Insider

"If this case was handled flawlessly, would it have changed anything? Nobody knows," the report said, adding that "mistakes were made."
MOAB, UT・3 DAYS AGO
The Guardian

A Canadian court has halved the sentence of a woman who killed her husband, revisiting a controversial case that revealed the legal system’s “outdated thinking” of the realities of domestic abuse. In a 2-1 ruling released on Wednesday, Alberta’s court of appeal determined that Helen Naslund’s 18-year...
PUBLIC SAFETY・3 DAYS AGO

An independent investigation into how police in Utah handled a domestic violence incident between Long Island natives Gabby Petito and her boyfriend Brian Laundrie revealed officers made several "unintentional" mistakes. Petito, age 22, of Blue Point in Suffolk County, who had been on a road trip with Laundrie, was killed...
MOAB, UT・3 DAYS AGO
ABC13 Houston

MOAB CITY, Utah -- An investigation into a domestic violence incident involving Gabby Petito and Brian Laundrie in Utah back in August is now complete. The 102-page report, made by independent law enforcement agency, found that the Moab City Police officers who responded to the incident on August 12, made several "unintentional mistakes," including not citing Petito for domestic violence.
MOAB, UT・3 DAYS AGO
ABC4

MOAB, Utah (ABC4) – The City of Moab has released its findings into the investigation of the police department’s handling of an incident between Gabby Petito and Brian Laundrie. The report of the investigation, which is over 100 pages and was written by a Captain with the Price City Police Department was released Wednesday. It […]
MOAB, UT・4 DAYS AGO
buzzfeednews.com

The Officers Who Investigated Gabby Petito And Brian Laundrie Before Her Death Should Be Placed On Probation, An Independent Review Found

The police officers who investigated a domestic dispute between Gabby Petito and her fiancé shortly before her death made several mistakes and should be placed on probation, according to an independent review released Wednesday. The report found that the two Moab police officers who contacted Petito and Brian Laundrie...
PUBLIC SAFETY・4 DAYS AGO
ABC Action News WFTS

A review of the Moab Police Department claims two of its officers made "several unintentional mistakes" in failing to cite Gabby Petito for domestic violence.
MOAB, UT・4 DAYS AGO
News 12

Lawyer: Brian Laundrie's parents working to get his notebook back from FBI

The parents of Brian Laundrie are working through the details of getting their son's notebook back from FBI custody, according to their lawyer. As News 12 reported, the notebook was found next to Laundrie's remains in October along with his backpack. Steven Bertolino, the Laundrie family’s attorney, also says the...
12 DAYS AGO
fox40jackson.com

Moab authorities released a report Wednesday on the independent investigation into their police department’s handling of the Aug. 12 domestic call involving Gabby Petito and Brian Laundrie – which resulted in no arrests despite Utah state law mandating an arrest or citation in domestic violence incidents. The investigation...
PUBLIC SAFETY・3 DAYS AGO
The Independent

A violent ex-partner travelled 28 miles on foot to stab a mother and her young autistic son to death in front of a distressed baby before leading police on a 24-hour manhunt, a court was told.Daniel Boulton, 30, is alleged to have knifed his former girlfriend Bethany Vincent and her nine-year-old son Darren Henson, also known as DJ, “numerous times” while the subject of a restraining order at around 8pm on May 31 last year.Boulton developed a “hatred” for Darren and walked from his address in Skegness to Ms Vincent’s home in High Holme Road in Louth Lincolnshire ...
PUBLIC SAFETY・3 DAYS AGO
1010WINS

The FBI has been in possession of the notebook since it was discovered near Laundrie’s remains in a Sarasota County nature park on Oct. 20.
NEW YORK CITY, NY・12 DAYS AGO
wearebreakingnews.com

They Recommend Testing Agents Who Arrested Petito And Laundrie

(CNN) — Two Moab, Utah, police officers who responded to a domestic violence call involving Gabby Petito and Brian Laundrie last year are due to be placed on probation for what the city cites as “several errors.” unintentional” committed during the encounter, according to an independent investigator assigned by the city to review the incident.
MOAB, UT・3 DAYS AGO
cbslocal.com

NEW YORK (CBSNewYork) — A new report says two police officers who stopped Gabby Petito and Brian Laundrie last year in Utah should be put on probation. Petito and Laundrie were on a cross-country road trip and traveled through Utah last August. That’s where a witness told police he...
UTAH STATE・3 DAYS AGO
The Independent

A man shot dead after taking hostages at a US synagogue has been identified as British national Malik Faisal Akram.The 44-year-old, from Blackburn in Lancashire, was killed in a standoff with police and SWAT teams that lasted at least 10 hours.The incident at Congregation Beth Israel in Colleyville, Texas, saw police first called on Saturday at 11am local time. Akram was killed at around 9pm.All four hostages had been released without physical harm.During the incident, the man could be heard ranting on a live-stream in what was reported to sound like a British accent.Today, the Foreign Office confirmed that...
PUBLIC SAFETY・8 HOURS AGO