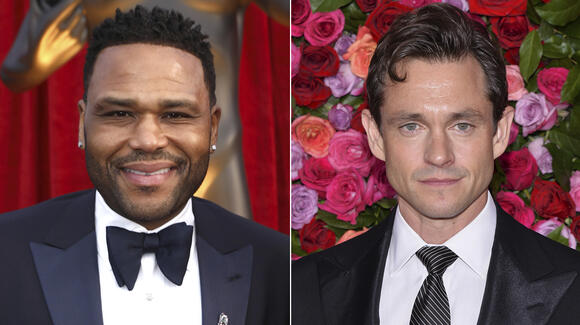 Anthony Anderson will be returning to NBC ’s “ Law & Order ” for its much-anticipated Season 21, reprising his role as Detective Kevin Bernard with a one-season contractual commitment. Hugh Dancy , meanwhile, joins the Dick Wolf franchise revival as an assistant district attorney.

Dancy, who will star in the upcoming “Downtown Abbey” movie sequel, is best known for his portrayal of Will Graham in NBC’s “Hannibal.” Dancy also starred in Hulu’s cult drama “The Path” alongside Aaron Paul and Michelle Monaghan. Most recently, Dancy wrapped production on Apple TV Plus’ upcoming “Roar” opposite Nicole Kidman, Cynthia Erivo and Issa Rae. He is repped by Untitled, UTA and Jackoway Tyerman Wertheimer.

Currently, Anderson is the star and executive producer of the highly popular and multi-award-nominated family sitcom “Black-ish,” which has been running for seven seasons on ABC. He also executive produces both “Black-ish” spinoffs (“Grown-ish” and “Mixed-ish”), and hosts the ABC game show “To Tell the Truth” and the prank show “House Haunters” along with his mom. For the past eight years, Anderson has hosted the NAACP Image Awards. Throughout his career, he has won seven Image Awards. Anderson first joined “Law & Order” at the end of Season 18 through its abrupt halt in Season 20. Other than his television credits, Anderson has appeared in films such as “Transformers,” “The Departed” and “Hustle & Flow.” He is repped by UTA, Artists First, Goodman, Genow, Schenkman, Smelkinson & Christopher, and The Initiative Group.

Earlier this month, NBC revealed that “Burn Notice” alum Jeffrey Donovan had been cast in the “Law & Order” revival. Donovan will play an NYPD detective; other character details are under wraps.

It was announced in September that the fan-favorite police procedural and Emmy-winning legal drama would be returning to its home network for a 21st season. The show originally ended in 2010 after 450-plus episodes and 20 seasons since its debut in 1999. This new “Law & Order” season will be the third show in the franchise running on NBC — the other two are “Law & Order: SVU” and “Law & Order: Organized Crime,” which saw “SVU” alum Christopher Meloni reprise the role of Elliot Stabler.

Joshua Jackson has signed on as the male lead in the “Fatal Attraction” series at Paramount Plus, Variety has confirmed. Jackson will star alongside previously announced co-lead Lizzy Caplan. The series is described as a deep-dive reimagining of the film that will explore the timeless themes of marriage and infidelity through the lens of modern attitudes towards strong women, personality disorders, and coercive control. Caplan will star as Alex, who becomes obsessed with her lover Dan (Jackson) after a brief affair. Glenn Close played Alex in the film version, earning herself an Academy Award and Golden Globe nomination in the process. Michael Douglas...
TV & VIDEOS・2 DAYS AGO
Variety

A revival of “Justified” has been ordered to series at FX, with Timothy Olyphant set to reprise the role of U.S. Marshal Raylan Givens. Variety exclusively reported that the project was in the works in March 2021. The new iteration of the drama series is inspired by the Elmore Leonard novel “City Primeval: High Noon in Detroit.” Leonard created the character of Givens, who appeared in several of the author’s novels and the novella “Fire in the Hole,” the latter of which served as the basis for “Justified.” Officially titled “Justified: City Primeval,” the new show picks up with Givens eight years...
TV SERIES・9 DAYS AGO
Variety

Louie Anderson, the iconic Emmy-winning comedian, actor and game show host, died Friday in Las Vegas after battling cancer, his publicist confirmed to Variety. He was 68. A seasoned stand-up with a career spanning over four decades, Anderson broke through as a comedian in 1984 when he performed a set on “The Tonight Show Starring Johnny Carson.” From there, he performed a comedy special on Showtime in 1987, made regular TV appearances on late-night shows and appeared in movies such as “Ferris Bueller’s Day Off” in 1986 and “Coming to America” in 1988. In 1995, Anderson produced, created and starred in the...
LAS VEGAS, NV・2 DAYS AGO
Deadline

EXCLUSIVE: Toks Olagundoye, Hari Nef and Ian Duff have been cast as series regulars in ABC drama pilot L.A. Law. They join original cast members Blair Underwood and Corbin Bernsen, who are reprising their roles as Jonathan Rollins and Arnie Becker, respectively, in the revival of the iconic Steven Bochco legal drama. Olagundoye, Hari Nef and Ian Duff all play new characters. In the pilot, written by Marc Guggenheim and Ubah Mohamed and to be directed by Anthony Hemingway, the venerable law firm of McKenzie Brackman — now named Becker Rollins — reinvents itself as a litigation firm specializing in only...
TV SERIES・3 DAYS AGO

L.A. Law is staffing up: Toks Olagundoye (Castle, The Neighbors) has joined ABC’s revival drama pilot, our sister site Deadline reports. The updated take is once again set at the venerable law firm of McKenzie Brackman, which has reinvented itself as “a litigation firm specializing in only the most high profile, boundary pushing and incendiary cases,” per the official synopsis. Olagundoye will play a new character, Assistant District Attorney Erika Jackson, opposite original series stars Blair Underwood and Corbin Bernsen, who are reprising their roles as Jonathan Rollins and Arnie Becker, respectively. Additionally, Hari Nef (YOU, Transparent) will portray a transgender lawyer,...
TV & VIDEOS・3 DAYS AGO
tvinsider.com

You know something’s a big deal when a pro like Sam Waterston is floored. “I wasn’t at all expecting to be bowled over, and I was,” he says of his first day back on set of the original Law & Order, returning almost a dozen years after its undeserved cancellation. “I was amazed at how great—and strange—it felt to step onto what looked exactly like the old sets, all brand-new, with dear old friends and cool new people.”
TV SERIES・11 DAYS AGO
TVLine

Law & Order: Jack McCoy Is Back in New Teaser for NBC's Upcoming Revival

Sam Waterston’s Jack McCoy is back! On Thursday, NBC released a new teaser for the forthcoming Law & Order revival featuring brand new footage of the beloved district attorney, who looks ready to return to his courtroom heroics. “It’s OK to the play the hero, as long as you win,” he says in the video, which you can check out below. Waterston will enter his 17th season playing the fan-favorite character, who was first introduced in Season 5 of Dick Wolf’s flagship procedural. The one that started it all. #LawAndOrder Season 21 premieres Thursday, February 24 on @NBC. pic.twitter.com/aj9pW5CdjA — 𝐋𝐀𝐖 & 𝐎𝐑𝐃𝐄𝐑 (@lawandordertv) January...
TV SERIES・2 DAYS AGO
Outsider.com

‘Law & Order’: Sam Waterston Opens Up About ‘Storytelling’ in the Revival Series

The correct term for the Law & Order reboot is the crime procedural is resuming. And after a dozen years off the air, Sam Waterston said the stories are as gripping as ever. Circle the date for Feb. 24. That’s when Law & Order returns to NBC. It’ll give the network three hours of Dick Wolf’s crime procedurals.
TV SERIES・10 DAYS AGO

How Pamela Fryman Is Stewarding the Traditional Sitcom

Pamela Fryman didn’t take it as a bad omen when the 1994 Northridge earthquake postponed plans to direct her first episode of primetime TV. It was a few weeks later, when production finally resumed on the NBC sitcom Café Americain, that she began feeling superstitious. “We were waiting for the audience to file in when they told us the show had been canceled,” recalls Fryman during an hourlong Zoom conversation from her home on the westside of Los Angeles in early January. Then 34, with daytime drama Santa Barbara her only directing credit, Fryman was tasked with rallying star Valerie Bertinelli...
LOS ANGELES, CA・1 DAY AGO
spoilertv.com

It’s not every day that a long-running show that seemed like it was over comes back after over 10 years away from the small screen, yet that’s exactly what’s happening with on NBC with the spinoff-spawning crime drama Law & Order. Long-time cast member Sam Waterston, who portrayed Jack McCoy from 1994-2010, is coming back to reprise the character for the revival in Season 21, and fans should be glad to hear he is more than excited about reviving the procedural.
TV SERIES・8 DAYS AGO
Deadline

EXCLUSIVE: Emmy-nominated Sofía Vergara has signed with CAA. Vergara is best known for her role in the five-time Emmy-winning comedy series Modern Family, which ran on ABC for 11 seasons. Vergara stars in the title role of the upcoming Netflix limited drama series Griselda, chronicling the real life of savvy and ambitious Colombian businesswoman Griselda Blanco, who created one of the most profitable cartels in history. Vergara has developed the series over eight years and executive produces with Luis Balaguer through Latin World Entertainment, an entertainment and media company they founded in the 1990s. She recently finished her second season as a judge...
CELEBRITIES・1 DAY AGO

The White Lotus star and SAG Award nominee Murray Bartlett has boarded Hulu’s limited series Immigrant; He joins star and executive producer Kumail Nanjiani. Bartlett joins the series as a series regular and will appear as Nick De Noia. Producer-choreographer Nick De Noia is a charming, fast-talking New Yorker who’s certain he’s God’s gift to entertainment. Just ask him. He is the person responsible for transforming Chippendales from a seedy male strip joint in West LA to the global juggernaut it would one day become. A man of many passions, Nick loves drinking, drugs, women, men–and most of all, show biz.
TV & VIDEOS・9 DAYS AGO
Outsider.com

Just as fans settled in for a Law & Order kind of Thursday, NBC tossed out a hype clip for the original series. After all, Law & Order, the series that inspired so many spinoffs, is premiering on Feb. 24. Check that, the series isn’t really premiering. It’s relaunching after a 10-year pause.
TV SERIES・2 DAYS AGO
digitalspy.com

The tantalising teaser for Law & Order season 21 confirms the person who put the 'pro' in procedural is back for the series revival. In October last year, it was announced the show would return after being off the air since 2010 — joining up with Law & Order: SVU and Law & Order: Organised Crime — as part of NBC's new Thursday night line-up.
TV SERIES・1 DAY AGO
TheWrap

Listen up, criminals: you’re going to want to hear this. District Attorney Jack McCoy (Sam Waterston) is back in the courtroom in the first promo for NBC’s “Law & Order” revival. Watch the promo via the video above. “Law & Order” returns for its 21st season...
TV SERIES・2 DAYS AGO
michiganchronicle.com

ROCHESTER HILLS – “Each of us can do a bite-size version of something important.”. That was part of the message delivered by Emmy & Golden Globe nominated actor Anthony Anderson. He was the keynote speaker at Oakland University’s 30th Annual Keeper of the Dream Scholarship Awards Celebration.
2 DAYS AGO
Outsider.com

Another twist in the long saga for Law & Order: SVU fans between Benson and Stabler hit a new notch thanks to Mariska Hargitay. And we can thank, in a way, Dylan McDermott for causing a stir. See, the Law & Order: Organized Crime star went on Twitter and shared something.
TV SERIES・2 DAYS AGO
Deadline

EXCLUSIVE: Marc Menchaca (Ozark, The Outsider) is the latest addition to the cast of Gareth Edwards’ New Regency film, True Love, which has entered production in Thailand. He’ll star alongside previously announced cast members including John David Washington, Gemma Chan, Allison Janney, Benedict Wong and Sturgill Simpson. (The latter recently took over the part that was originally to have been played by Danny McBride, as we told you first.) The latest film written and directed by Edwards (Rogue One: A Star Wars Story, Godzilla) is billed as an original sci-fi story set in the near future. Specifics as to its plot are currently...
MOVIES・2 DAYS AGO