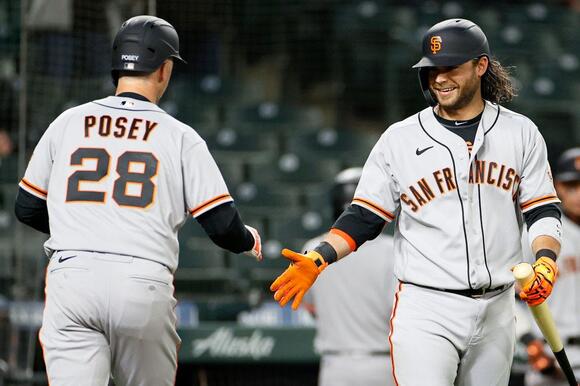 Brandon Crawford and Buster Posey aren’t known for their outspoken nature. Both guys have been steady presences since making their San Francisco Giants debuts more than a decade ago.

The 2022 season will be different without Posey squatting behind the plate. Following his iconic 11-year career, Posey retired in early November. In a heartfelt letter to his former teammate, the Giants shortstop expressed his admiration for Posey Tuesday for The Players’ Tribune .

As Crawford noted, his relationship with Posey dates back all the way to 2004, when the two faced each other in a high school showcase game. Nearly 20 years later, Crawford said he and Posey’s families have grown tight with one another.

In his first-person essay, the usually stoic Crawford laid out his emotions for Posey and his impact on the franchise:

So, yeah, it goes without saying that the Giants are going to miss Buster Posey.

It’s going to be difficult not having him out there leading the charge next season. It’ll be different for sure.

But, again, for me, the toughest part about this is going to be not seeing my friend for 162-plus days of the year. Not having those conversations, those moments that all good friends share — the little inside jokes, the laughs, the companionship. We’ve played together for so long, been through so much together. So, over the years, all those things have become part of what playing baseball means to me.

Even just sharing stories about our kids every day in the clubhouse — the dad stuff — as lame as it might sound, I’m really, really going to miss that.

The entire essay is definitely worth a read and encapsulates the strong bond Crawford and Posey forged in their 13-plus years together in the organization.

Earlier this month, Crawford joined 95.7 The Game’s “Willard & Dibs” to share his thoughts going forward without his partner Posey.

“It’s going to be tough, for sure,” Crawford said. “You lose one of the more important, bigger pieces of a team in franchise history, it’s going to be tough to replace. We’ll do our best. I think we still have some pretty good leadership in the clubhouse.”

A polarizing figure throughout his career, A-Rod ranks fourth on the all-time home run list, but was suspended for violating MLB's drug policy.
MLB・2 DAYS AGO
Inside The Dodgers

The Dodgers catcher explained how he approaches the highs and lows of a MLB season.
MLB・2 DAYS AGO

Thanks to the hot stove freeze, there’s time to sit back and explore some of the bigger question marks surrounding the Dodgers for 2022. With Walker Buehler and Julio Urias atop the rotation, Dave Roberts and the Dodgers will have some decisions to make on who will fill out the remaining spots ...
MLB・2 DAYS AGO
USA TODAY

Roger Clemens, the seven-time Cy Young winner, is in his final year of eligibility on the Hall of Fame ballot.
MLB・14 HOURS AGO
Inside The Phillies

After a disappointing 2021 campaign, what are the Phillies' options with Didi Gregorius?
MLB・2 DAYS AGO
USA TODAY

Three weeks from when pitchers and catchers usually report and no one knows when spring training will start or if it will be a truncated schedule.
MLB・1 DAY AGO

A new change will be implemented in the upcoming minor league season.
MLB・2 DAYS AGO
Inside The Dodgers

Justin Turner began the 2021 season batting .305 with 29 homers, 50 RBI, and a 1.088 OPS over 84 games. Then he was selected to play in the All-Star Game for the second time, and it appeared as if the Dodgers made a brilliant move in signing him to a 2-year deal with a team option in the previous ...
MLB・2 DAYS AGO
Audacy

Yankees legend Alex Rodriguez randomly showed up on the TV in the fourth quarter of Saturday’s divisional playoff game between the Packers and 49ers.
NFL・1 DAY AGO
Inside The Phillies

Jean Segura doesn't put up flashy numbers or make dazzling defensive plays, but all together he is one of the most well-rounded players in the National League.
MLB・1 DAY AGO

Five years after signing on as Phillies general manager, Matt Klentak has accepted a job as special assistant for the Milwaukee Brewers.
MLB・13 HOURS AGO
Inside The Blue Jays

Carter's fiery demeanor got him noticed by Blue Jays scouts. Now it's his humility off the field that's impacting the city of Toronto.
MLB・16 HOURS AGO
Inside The Dodgers

The left-handed hitter has a new coach to help him in the batting cages.
MLB・1 DAY AGO
Inside The Phillies

Alec Bohm was one of the league's worst fielders in 2021. As trade rumors swirl this offseason, it would mean a lot for the Phillies if Bohm could put a hammerlock on his natural position.
MLB・1 DAY AGO
Inside The Phillies

The two sides are starting to step up the pace of their meetings.
MLB・8 HOURS AGO
Inside The Dodgers

Add video gaming to Betts' growing list of non-baseball interests.
MLB・14 HOURS AGO
Inside The Dodgers