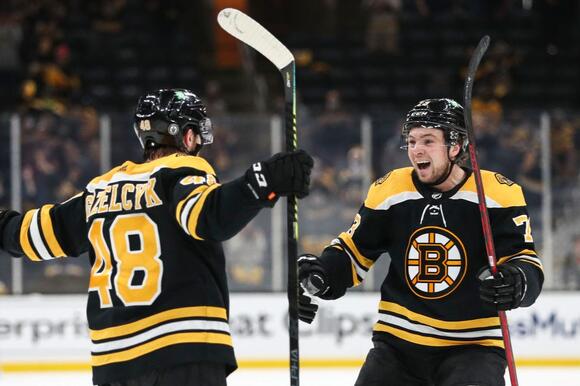 When the Bruins hit the ice for Tuesday’s practice at Warrior Ice Arena, they had some interesting new defense pairings.

Matt Grzelcyk moved up to the top pairing with Charlie McAvoy. That’s not too surprising, as they’ve played together plenty in the past.

The second pairing might get your attention, though: Derek Forbort and Brandon Carlo. And then the third pairing featured a rotation of Mike Reilly, Jakub Zboril and Connor Clifton.

So, Forbort and Carlo together? That’s the Bruins’ two biggest defensemen, and the two who are closest to stay-at-home, defense-first players.

That kind of pairing has been a rarity under Bruce Cassidy in recent years, as he usually prefers to pair a player like that with a more mobile partner -- one guy who can get up the ice and join the attack, one who can provide some security and physicality. It's why Forbort’s most common partners this season have been McAvoy and Clifton, while Carlo’s have been Grzelcyk and Reilly.

But there are reasons to think this is worth a shot. The first is that the pairings the Bruins had been using weren’t working, so really any sort of change should be on the table anyways.

The analytics suggest there’s been some bad luck there, but they still don’t paint a pretty picture. According to Evolving-Hockey , Forbort-McAvoy has a 44.2% expected goals-for percentage (xGF%), while Grzelcyk-Carlo comes in 41.2%. That is just nowhere close to good enough from your top four.

Grzelcyk-McAvoy, meanwhile, has fared much better. In their 100 minutes together, the Bruins have outscored opponents 6-2 and have an xGF% of 74.5%. That comes after a successful season last year when those numbers were 20-7 and 66.4%.

And here’s where things get interesting: the numbers for Forbort and Carlo together -- in a much smaller sample -- are also very good. In their 33 minutes together at five-on-five, the Bruins have outscored opponents 5-0 and have an xGF% of 55.0%. Forbort and Carlo have also played together a lot on the penalty kill, so their chemistry goes beyond just those even-strength shifts.

“We play a pretty similar-style game, so it should be pretty easy to know what each other’s doing out there,” Forbort said. “It’s going to be simple, hard, just kind of make easy plays and be hard to play against. I’ve gotten to play a few shifts with him, just when we’re up a couple goals or when we’re switching things up when we’re down to get more offense [on other pairs].”

The five goals they’ve been on the ice for are nice, and Forbort does have four goals himself this season, but the Bruins aren’t going to expect this pairing to be a major offensive contributor. Instead, it will be more of a shutdown pairing, with coach Bruce Cassidy referencing Carlo playing with Zdeno Chara earlier in his career as something of a model. That should also free up Grzelcyk and McAvoy for more offensive shifts, where they excel.

“Well, Grizz and Charlie have played well together. We know that,” Cassidy said when asked about the changes. “The one guy Forbort really hasn’t partnered with is Carlo, so at some point I was probably going to want to look at it just to see. Grizz, I think right now, is off a little bit. I think playing with Charlie will get him back on track. They tend to play well together.

“I think Brandon played some of his best hockey with Zee in a shutdown role, so just focus on that. I know it’s been a few years. So, he can do that well and hopefully it gets him back to where he needs to be. I just think that [second] pair hasn’t been as strong as it could be. So we move a couple pieces around.”

As for the third pairing, it sounds like Cassidy will stick with Reilly-Zboril for the time being, with Clifton remaining the odd man out. In Reilly and Zboril’s 32 minutes together (again, small sample), the Bruins have outshot opponents 23-12, outscored them 1-0, and have a 68.1% xGF%.

“I’ve liked the Zboril-Reilly pair,” Cassidy said. “They’ve added some good transition, puck movement. Defended hard. Everything we’ve asked Mike to do, he’s done. Zboril’s gone in and been consistent. So we don’t really want to mess with that one if we don’t have to.”

Now that the 2021-22 season is about half of the way through, and Covid is ravaging many clubs, it’s time
NHL・13 HOURS AGO
CBS Boston

By Michael Hurley, CBS Boston BOSTON (CBS) — It’s early in the Tuukka Rask 2.0 Era for the Boston Bruins, but the results have been discouraging thus far. Rask fell to 2-2 in his four starts since rejoining the Bruins this month with a 5-3 loss to the Ducks on Monday night. Rask allowed five goals on just 27 shots faced, sinking Boston’s chances in what ended up as just the Bruins’ third loss of the month. Never one to shy away from a bad performance, Rask spoke with the media after the game and matter-of-factly explained his level of play. “Obviously,” Rask said, “I...
NHL・17 HOURS AGO
CBS LA

BOSTON (AP) — Troy Terry scored his team-leading 23rd goal, Ryan Getzlaf had a goal and set up another, and the Anaheim Ducks cooled off the Boston Bruins with a 5-3 victory Monday night. Isac Lundestrom, Derek Grant and Greg Pateryn also scored for the Ducks, who won for the fourth time in 11 games. John Gibson made 23 saves and Hampus Lindholm had three assists. David Pastrnak scored his 20th goal for Boston, with 12 coming in 13 games this month. Taylor Hall added a power-play goal and Erik Haula scored late for the Bruins, who had gone 10-2 since New...
NHL・1 DAY AGO
NESN

The Boston Bruins will have to shuffle their lineup as they end their homestand against the Anaheim Ducks. The B’s have ruled out Matt Grzelcyk from Monday’s game due to an upper-body injury. Grzelcyk suffered the injury Saturday during Boston’s win over the Winnipeg Jets, and head coach Bruce Cassidy said Grzelcyk is day-to-day. Urho Vaakanainen will replace him as Charlie McAvoy’s partner on the Bruins’ top defensive pairing.
NHL・1 DAY AGO

After the Boston Bruins choppy start to the season, full of COVID-19 and weeklong layoffs, the B’s are rolling. And it couldn’t have come at a better time. With the New England Patriots season having ended with a thud against the Buffalo Bills, the Boston Celtics consistently leaving fans frustrated, and the Boston Red Sox in a lockout, the Bruins are just about the only show in town these days.
NHL・2 DAYS AGO
Sportsnaut

Coming off a successful homestand, David Pastrnak and the Boston Bruins will look to stay hot on the road as
NHL・9 HOURS AGO
Sportsnaut

He said it initially it was a head-shot and after having time to watch it, Pens head coach Mike Sullivan questions why the league won’t punish the hit on Teddy Blueger
NHL・15 HOURS AGO
Chicago Tribune

If you’re looking for fantasy hockey tips for the games ahead, you have come to the right place. As the
NHL・15 HOURS AGO
CBS Boston

BOSTON (CBS) — The Bruins will be a little shorthanded along the blue line as they wrap up a seven-game homestand. Defenseman Matt Grzelcyk will be sidelined on Monday night when the B’s welcome the Anaheim Ducks to TD Garden. Grzelcyk briefly left Saturday’s win over the Jets after being sent into the boards by Winnipeg’s Pierre-Luc Duboius in the first period. He did return to the game and finished with 13:35 of ice time, and was credited with an assist on David Pastrnak’s game-winning goal in the third period. Head coach Bruce Cassidy was cautiously optimistic that Grzelcyk avoided a serious...
NHL・1 DAY AGO

Ryan Pulock has now missed 22 games and counting with a lower body injury, but if there’s a silver lining to his absence, Peter Schwartz writes that it’s the emergence of Robin Salo and Noah Dobson.
NHL・1 DAY AGO
San Diego Union-Tribune

In a discussion about injuries, NHL great Bobby Orr once told Philadelphia Flyers defenseman Keith Yandle: “If you can skate, you can play.’’
NHL・1 DAY AGO