Law & Order: OC Boss Teases Holiday SVU Crossover: 'I Hope We Don't Ruin Christmas for You for All Time' 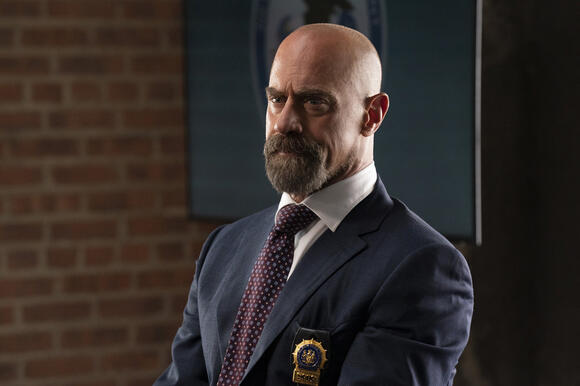 Getting Law & Order crossover details out of Organized Crime showrunner Ilene Chaiken is like questioning the most lawyered-up of perps: You’re not likely to get much to go on.

However , when TVLine recently spoke with the procedural’s executive producer, we peppered her with questions about the upcoming Dec. 9 SVU crossover event — and she gave us a potential glimmer of a possible tease… and because we’re as greedy as a pre-Whoville Grinch, we’re taking it!

But let’s back up a second. On Monday, NBC released the crossover episodes’ titles and synopses. That night’s SVU (9/8c) is called “People Vs. Richard Wheatley,” which means what you think it does: Dylan McDermott’s behind-bars baddie is back. “Carisi tries Richard Wheatley for the murder of Kathy Stabler,” the official blurb reads. And, as was hinted at in a promo, “Benson finds herself at odds with a friend when Barba agrees to take the case.”

Then, at 10, the Stabler family’s newest emergency takes center stage. Per the synopsis for the hour, which is titled “The Christmas Episode”: “When Eli goes missing, Stabler asks Benson and the task force to help him find his son. Wheatley considers his future.” Hmm… might those two things be connected in some way?

“It will be a very Law & Order Christmas,” Chaiken says, chuckling at our consternation. So… Claymation and Rudolph the Red-Nosed Reindeer? “Exactly. And lots and lots of Christmas carols,” she continues, voice sounding slightly more serious as she adds, “I’ll just say: I hope we don’t ruin Christmas for you for all time.”

Not gonna lie: Chaiken’s comment has us a wee bit worried. How much more can Stabler, Benson and their families take?! But worry always feels lighter when it’s shared, so now that we’ve filled you in, we turn it over to you: Hit the comments with your predictions/hopes/fears for the December crossover!

How I Met Your Father EP Talks HIMYM Easter Eggs — Plus, Is Tinder Match Ian Linked to This Memorable Character?

How I Met Your Father exists in the How I Met Your Mother universe, which is confirmed when Sophie first steps foot in Jesse and Sid’s apartment. But beyond that, just how eagle-eyed should longtime fans be in pursuit of additional Easter eggs that tie the two sitcoms together? “I think pretty eagle-eyed,” series co-creator Isaac Aptaker tells TVLine. “That’s something we love from the original. It’s also something [co-showrunner Elizabeth Berger and I] love doing on This Is Us, where everything is very, very intentional. These shows are so much fun because they are puzzles. They take simple moments, very...
TV SERIES・3 DAYS AGO
TVLine

Servant Season 3: M. Night Shyamalan Details Leanne's Paranoia, Why Next Season Is the Right Time for It to End

When Apple TV+’s Servant returns for Season 3 this Friday, debilitating paranoia will take center stage — but that won’t be the only horror haunting the Turners. And if we’ve learned anything from watching the psychological fright fest for two seasons, we know things are undoubtedly about to get weird(er). When we last left the family and its supernaturally inclined nanny, Leanne resisted and killed her former Church of the Lesser Saints leader Aunt Josephine, ultimately deciding to stay and protect the Turners at all costs. But with two more seasons to go before we reach the story’s end, the church...
TV SERIES・1 DAY AGO
TVLine

Servant Season 3 Premiere Recap: Did the Cult Come Crawling Back? Grade It!

The Turners may have survived the wrath of Aunt Josephine and gotten their precious baby Jericho back in the process, but their supernatural trauma is far from over. While things seem back to normal for Dorothy and Sean at the top of Servant‘s Season 3 premiere (now available to stream on Apple TV+), nanny Leanne is quietly suffering from intense nightmares and paranoia. She’s also still hiding that strange, sharp dagger under her pillow. Just in case. When a moth dies after repeatedly slamming into her window, she tries and fails to revive it. But her paranoia is all-consuming. She wonders why...
TV SERIES・8 HOURS AGO
Outsider.com

Law & Order teased what both Organized Crime and SVU have in store for fans on next week’s episodes, and things are getting heated. “The action will leave you breathless,” the franchise’s Twitter account posted. Alongside the tweet, a video showcased just what fans are in for when the new episodes air. First up, SVU sees a convicted predator attacked, which raises the question of whether a predator deserves justice. ADA Carisi puts it best: This trial’s going to turn into “a sh*tshow.”
TV SERIES・13 DAYS AGO

With Law & Order: SVU back from its winter break, the newest episode left fans with a few questions. When the series returned with a new episode, the squad teamed up with Hate Crimes, led by a very familiar face: Donal Logue’s Captain Declan Murphy. As the episode went on, we got to meet the rest of his team. Ari’el Stachel returned as Detective Hasim Khaldun, who worked with SVU in Seasons 21 and 22. Cyndee Rivera also reemerged as Detective Mia Ruz, who also met the squad in Season 22. Jason Biggs as Detective Andy Parlato-Goldstein also joined the team.
TV SERIES・8 DAYS AGO
CinemaBlend

What Law And Order: SVU's Shocking Twist For Benson Could Mean For The Rest Of Season 23

Spoilers ahead for the midseason premiere of Law & Order: SVU Season 23, called “Silent Night, Hateful Night.”. Law & Order: SVU kicked off the new year with a holiday episode that was anything but merry and bright, and the midseason premiere ended on a shocking twist for Olivia Benson. Although she and the rest of the cops working the hate crimes case did save the day and stop the worst from happening, Benson had to take some drastic action, and it could well continue to affect Season 23 in 2022. She killed a man in public to stop the situation from going from bad to so very much worse.
TV SERIES・14 DAYS AGO
startattle.com

Tomorrow night’s Law & Order: SVU season 23 episode 11 is going to be all sorts of intense, especially sense the courtroom could be even more chaotic than usual. What’s at the center of “Burning with Rage Forever”? In a word, rage. This is going to be an episode revolving largely around Olivia Benson taking on the complicated case of a predator who finds himself beaten and attacked as an act of revenge. Does someone behind such heinous acts deserve justice? These are questions that both Benson and Carisi seem to be wrestling with. There’s fulfilling the job description, but then there are all of the moral complications associated. When it comes to exploring ethics and philosophy, this is an episode that could dive head-first into all of this.
TV SERIES・9 DAYS AGO

Another twist in the long saga for Law & Order: SVU fans between Benson and Stabler hit a new notch thanks to Mariska Hargitay. And we can thank, in a way, Dylan McDermott for causing a stir. See, the Law & Order: Organized Crime star went on Twitter and shared something.
TV SERIES・1 DAY AGO
cartermatt.com

Is Law & Order: SVU new tonight on NBC? Not only that, but are we getting Organized Crime to go along with it? Just as you would imagine, there are many things worth diving into within this piece. The promos hype up a lot of drama, and we know that both of these shows are going to be firing on all cylinders to present you with chaotic, unpredictable stories.
TV SERIES・1 DAY AGO
tvseriesfinale.com

‘Law & Order: SVU’: This Photo of Benson and Carisi Is ‘Guaranteed’ to Make You Smile

On Law & Order: SVU there are a lot of interesting relationships. Olivia Benson and Sonny Carisi are one of the fan-favorite combos. Benson has had a lot of strong relationships on the show. While Carisi is far from a love interest, he is a good friend to Benson. The ADA has done a lot to support her and she returns the favor whenever she can. As a former detective, Carisi understands what the unit goes through from day to day.
TV SERIES・8 DAYS AGO
Distractify

Olivia Benson's Son on 'Law and Order: SVU' Came Out in a Tough but Sweet Episode

It's no secret that Law & Order: SVU has had its fair share of controversial episodes. Sensitive topics that make people uncomfortable, but also engage them in conversation, are in the show's name. The Special Victims Unit focus on cases that involve sexual assault, rape, or crimes that require a delicate touch, such as when the victims are children.
TV SERIES・1 DAY AGO
Popculture

Vincent D'Onofrio, who fans may know as a frequent face on Daredevil and Hawkeye, says he's open to reprising his role on the upcoming Law & Order revival on NBC. D'Onofrio starred as Detective Robert Goren on the series spinoff Criminal Intent for a decade before ultimately leaving the show in 2011.
TV SERIES・14 DAYS AGO
Outsider.com

‘Law & Order: SVU’ Fans Discuss the Potential of a Benson and Barba Relationship

One of the storylines that Law & Order: SVU fans love to keep up with has to be Olivia Benson’s love life. So, what are the chances she ends up with Barba?. When Rafael Barba was the ADA and working on Benson’s side of things, the two had chemistry. It was set up as one of Benson’s love interests. However, nothing too serious ever came of it. That seems to be a big recurring theme as well.
TV SERIES・14 DAYS AGO
TVLine

Raising Dion‘s titular adolescent gets to fine-tuning his powers in the trailer for Season 2 of the Netflix superhero series — and it’s a good thing, too, seeing as “something terrible is coming.” Based on the comic book by Dennis Liu, Raising Dion tells the story of Nicole (Shadowhunters‘ Alisha Wainwright) and her son Dion (Ja’Siah Young) after Dion starts to manifest mysterious, superhero-like abilities. In Season 2 — which releases all eight episodes on Tuesday, Feb. 1, and picks up two years after defeating Jason Ritter’s Crooked Man — Dion continues honing his powers with the support of his mom and...
TV SERIES・3 DAYS AGO
cartermatt.com

After tonight’s new episode, it only makes sense to want the Law & Order: SVU season 23 episode 13 return date. Why wouldn’t you? We’re so far into the show at the moment, and there is so much exciting stuff ahead!. Perhaps the most exciting news of...
TV SERIES・1 DAY AGO
Outsider.com

In the upcoming “Law & Order: SVU”, Benson and the team discover a boxer is missing before the biggest bout of the year. A new trailer for the episode, titled “Tommy Baker’s Hardest Fight”, it seems like they find him barely conscious. It turns out,...
TV SERIES・4 DAYS AGO