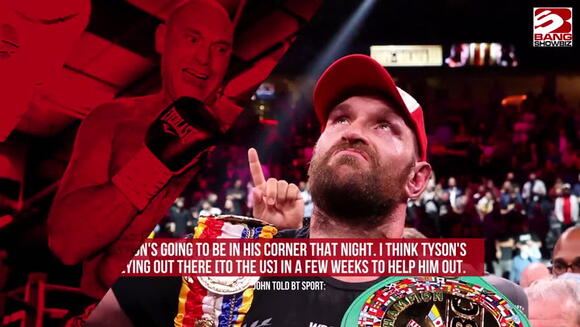 Tommy Fury will set his sights on fighting Logan Paul if he beats younger brother Jake next month, his father has revealed.

The 22-year-old, who is the younger brother of WBC heavyweight champion Tyson Fury , takes on YouTube star Jake Paul in Florida on 18 December .

And if Tommy comes through that grudge match, his father John Fury believes he will look to face 0-1 Logan Paul in his ninth pro bout.

He told Rob Moore on YouTube : “If he’s on his game, Tommy, and he’s firing on all four cylinders. Easy night’s work, easy money and the winner goes on to bigger and better things.

“We’ll get the brother out the game as well, then we’ll start looking at conventional titles for him. A brother is gonna wanna redeem another brother, isn’t he?

“When he knocks Jake Paul out, the brother’s gonna wanna take his part, ain’t he? But I don’t think so because the hiding Tommy’s gonna give Jake Paul, the other brother won’t be interested either.”

Both Tommy Fury and Jake Paul are undefeated as professionals as they prepare to face off against one another in Tampa.

But YouTube star KSI, who beat Logan Paul in 2019, believes Fury may crumble under the pressure when he steps in against Jake Paul .

“I see Tommy losing, you know why? I see him s*****g himself on the big stage,” said the 28-year-old internet sensation.

“I think that’s it, he knows you’ve got everything, you’re ready, you could f*** him up, but will you be able to act on the night? And he’s just not sure.”

A potential fight between Mike Tyson and Jake Paul in Las Vegas is unlikely to be sanctioned.Former UFC champion Michael Bisping believes that strict rules set by the Nevada State Athletic Commission mean that an exhibition encounter will not be licensed. Paul and Tyson are said to be in discussions over a bout, with organisers hoping a clash between the Youtube personality and former undisputed heavyweight champion could generate £36million if held in the American city.Yet Bisping, a former UFC middleweight champion, does not think it would be approved even as reports suggest a verbal agreement between the pair may...
COMBAT SPORTS・2 DAYS AGO
ABC13 Houston

The Pauls hit Houston! The brothers are set to host a one-night event at Cle nightclub.
HOUSTON, TX・6 DAYS AGO
SPORTbible

​Tyron Woodley has finally addressed the 'fix' claims surrounding his crushing defeat to Jake Paul. The former UFC champion suffered a brutal knockout defeat to Paul, who stopped him with a brutal clubbing right hand. But his victory over Woodley was marred by accusations of the fight being rigged. Fight...
UFC・1 DAY AGO
dexerto.com

YouTuber-turned-boxer Jake Paul has revealed that he actually earned even more than the $45 million that Forbes estimated he earned in 2021. 24-year-old Jake Paul first launched his YouTube channel in 2014, and since then he has gone on to become a hugely topical creator thanks to endeavors like the Team Ten content house and his recent ventures into the world of boxing.
CELEBRITIES・6 DAYS AGO

Woodley To Haters & Online Trolls: Jake Paul Would Knock You Out, Too

Tyron Woodley is firing back at the people hating on his loss to Jake Paul. It’s been just over a month since Tyron Woodley was knocked out by Jake Paul in their second fight against each other. Woodley has been catching some heat from haters and people online since the loss. Woodley has some words for those who are criticizing his loss and, in turn, is giving some credit to Paul.
COMBAT SPORTS・1 DAY AGO
ComicBook

Last month, Logan Paul earned the ire of retro gaming enthusiasts across the internet when he revealed a video of himself creating a table using 15 Game Boy Color handhelds and epoxy resin. The video immediately went viral, as fans were furious to see the Nintendo systems rendered inoperable. The table looked incredible, but fans were very unhappy to see the systems essentially destroyed as part of the art project. In a new episode of IMPAULSIVE, the streamer directly addressed the controversy, downplaying the Game Boy Color's scarcity, and stating that he was surprised by the negativity he received on social media.
VIDEO GAMES・14 DAYS AGO
Bloody Elbow

It wasn’t a good day for Logan Paul. The YouTube star and boxer was the victim of a scam, as he spent a whopping 3.5 million dollars on Pokemon cards only to find out that they were fake. It all started when Paul threw down the cash on the...
GAMBLING・6 DAYS AGO
snntv.com

Logan Paul denied claims that he faked the $3.5m Pokemon card box scandal for YouTube content, insisting that “it’s not fake at all” and the whole thing left him feeling “incredibly sad”. In December 2021, Logan thought he struck gold after dropping $3.5 million on...
BEHIND VIRAL VIDEOS・2 DAYS AGO
SPORTbible

Dana White has refused to rule out allowing Jake Paul to fight in the UFC despite the two being involved in a heated feud. Outspoken Paul has repeatedly gone after the UFC president, accusing him of being addicted to cocaine and not paying his fighters fairly. He also said he...
UFC・9 HOURS AGO
Sportsnaut

Many UFC fans have likely been typing Nate Diaz next fight recently in their MMA Google searches, as they wonder
UFC・2 DAYS AGO
The Independent

Francis Ngannou would relish the opportunity to go head-to-head with Tyson Fury in his next fight.The 35-year-old UFC heavyweight champion faces former team-mate Ciryl Gane in a unification bout in Anaheim California at the weekend, but would take to the octagon with WBC champion Fury having challenged him to a contest wearing MMA’s lighter gloves.Asked if everything goes to plan against Gane whether he would rather face him or defend his title against Jon Jones in his next fight, the Predator told a press conference: “If you give me the two options, I would choose fighting Tyson Fury.One of...
UFC・2 DAYS AGO

Logan Paul is one of the most famous (or infamous) internet personalities of the past decade. From gaining considerable traction on Vine to making it huge on YouTube to even stepping into a professional boxing ring he’s certainly done his bit to cement his legacy on the internet. For this piece, we’ll be taking a look Logan Paul’s net worth in 2022.
CELEBRITIES・9 DAYS AGO
The Independent

Tyson Fury’s promoter Bob Arum is still hopeful that his client’s fight with Dillian Whyte can be held in Cardiff on 26 March.Continued negotiations over the splitting of the purse threaten to delay the encounter, which is due to be held at the Principality Stadium.The WBC had declared that the purse would be split 80/20 in favour of champion Fury, who has been ordered to face Whyte.However the challenger has appealed having been left unhappy by the proposal, and purse bids were delayed for a second time this week.Eddie Hearn suggested that this delay may scupper hopes of holding the...
COMBAT SPORTS・2 DAYS AGO
Insider

Conor McGregor is tipped to return this summer to the UFC for his comeback from a broken leg, the UFC President Dana White said this week.
UFC・16 HOURS AGO
The Independent

Dreams of replicating the ferocious Mike Tyson drove Francis Ngannou in his unlikely journey to heavyweight glory.But while Iron Mike initially lit that fire inside him, his inspirational journey out of poverty and gruelling work at sand quarries eventually saw the Cameroonian transition to MMA after moving to Paris.His notorious power, which has inspired his destructive path to the top of the UFC somewhat belittles his craft. It obscures a newfound nuance to his game that was beautifully showcased in his rematch against Stipe Miocic 10 months ago.From a reckless brawler in love with his power at times, Ngannou, now...
UFC・7 HOURS AGO

Brittany Renner endures a boatload of criticism seemingly for just existing, and many assume that her dating methods are predatory at best. However, for all of that chatter, Renner was recently seen holding her own during an appearance on a popular podcast that’s been in the news of late. The popular social media figure was […]
CELEBRITIES・1 DAY AGO
MMAmania.com

We’re not off to a great start. Ultimate Fighting Championship (UFC) was forced to reshuffle its pay-per-view (PPV) lineup on Friday morning after losing not one, but TWO fights for UFC 270, scheduled for this Sat. night (Jan. 22, 2022) inside Honda Center in Anaheim, California. LIVE! Watch UFC...
UFC・11 HOURS AGO