A woman convicted of her role in the 6 January riot at the US Capitol says she has no regrets about her role in the attempted insurrection by supporters of former president Donald Trump as she prepares to go to prison.

Jenna Ryan told WFAA in Dallas that she is preparing herself for her time in prison. Ryan was sentenced to 60 days in prison for the Class B misdemeanor of parading, demonstrating or picketing inside a Capitol building. 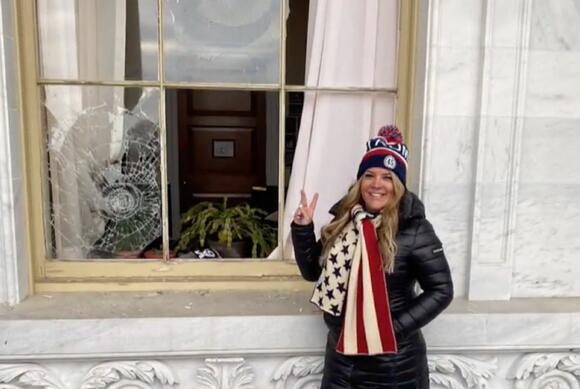 “I’m watching all the YouTube videos on how prison is, how to go to prison, what to do,” she said. She also blamed a police officer for allowing her to enter.

“I wish that (door) had not been open,” she said. “but a police officer was standing next to me. It was kind of like a Walmart greeter.”

“It was a beautiful parade of red flags, it wasn’t the violence you see on the news,” she said. “It was very peaceful.”

This directly betrays Ryan tweeting a picture of herself in front of a broken window with a caption that reads “If the news doesn’t stop lying about us we’re going to come after their studios next.”

Ryan tweeted earlier this year that she was “ definitely not going to jail ” because she was white, blonde, had a good job and “a great future” before ultimately being sentenced to 60 days.

But despite saying earlier that “I walked into the Capitol for 2 minutes and I am remorseful of that,” she seemed to backtrack.

“I’m not one to go hide and as far as remorse, I have a problem with remorse because it’s like a thought crime,” she said.

that 60 days should have been 600 days. the courts aren't giving these folks enough time. 60 days isn't near enough for her arrogance and she'll do it again

Trump said it best i like uneducated people, now you know why there in jail and he's playing golf.

See how she does in prison with zero and a criminal record when she is released, these are the same people who claims to be a superior race lmao

Donald Trump returned to Arizona on Saturday night to push his claims of voter fraud and defend the rioters involved in the deadly Capitol attack in his first major political event of the 2022 midterm election year. "We won those elections. We won them big. We can't let them get...
PROTESTS・2 DAYS AGO
Newsweek

Clifford Meteer likened Ashli Babbitt's death on January 6 to a "murder" in the Capitol and said it was a patriot's duty to "rattle the cage."
PROTESTS・21 HOURS AGO
Business Insider

An accused Capitol rioter and a member of the Proud Boys is going back to jail after saying that he could repeat his 6 January actions. Federal prosecutors moved to have Josh Pruitt’s pretrial release revoked after he told CNN that he doesn’t believe he has done anything wrong and that he would consider storming the Capitol again. “So you asked me if I’d do it again? I want to say yes,” Mr Pruitt said when asked if he still would have been a part of the insurrection if he’d been aware of the legal ramifications. But he added...
PUBLIC SAFETY・2 DAYS AGO

"This entire indictment echoes the words, the conduct, the crimes of Donald Trump," Glenn Kirschner said in a Saturday video.
POTUS・2 DAYS AGO
Black Enterprise

A mother in North Carolina who escorted her 14-year-old son inside the U.S. Capitol to riot during the insurrection has been sentenced to jail time. Virginia Spencer was sentenced to three months in prison and three years probation while her husband Christopher Raphael Spencer awaits trial for his felony charge, WUSA9 reports.
PUBLIC SAFETY・7 DAYS AGO
The Independent

A South Dakota man accused of taking part in the 2021 Capitol riot rapped about the insurrection on YouTube, federal agents say.According to a criminal complaint, Billy Knutson, 36, posted photos of himself outside the Capitol on the day of the attack. A relative of his told the FBI about the photos, and a second source showed them a video that allegedly showed Mr Knutson climbing into the Capitol Building through a broken window.As if that weren’t enough, the first source also said Mr Knutson was a rapper on YouTube – and many of his songs were about the...
BEHIND VIRAL VIDEOS・4 DAYS AGO
CBS News

The Justice Department filed the most serious charges in its investigation into the U.S. Capitol riot. Members of the Oath Keepers, including its leader Stewart Rhodes, were charged with seditious conspiracy. Jeff Pegues has the latest.
CONGRESS & COURTS・4 DAYS AGO

One year after Ashli Babbitt was fatally shot during the Jan. 6 insurrection, the late Air Force veteran’s husband, Aaron Babbitt, spoke with TMZ about how things would’ve been different had he accompanied his wife to Washington D.C. on that fateful day. When asked if he wished he...
WASHINGTON, DC・10 DAYS AGO
FOX 40 News WICZ TV

Judge scolds NC woman for bringing son to US Capitol riot, then sentences her to prison

A year and a day after taking part in an unprecedented assault on the country’s democracy, Virginia Spencer became the first North Carolina defendant sentenced in connection with the violent breach of the U.S. Capitol. Now, the Pilot Mountain mother of five will be the first to spend time...
WASHINGTON STATE・10 DAYS AGO
The Independent

A college student who turned his father in to investigators after the Capitol riot is afraid his dad is getting further radicalised in prison. VICE News spoke with Jackson Reffitt, who turned his father, Guy Reffitt, into the FBI after learning he had participated in the Capitol riot. Guy Reffitt was arrested on 19 January. He is a member of the extremist right-wing gang the Three Percenters, and was charged with five counts related to the Capitol riot, including possession of a semi-automatic weapon on Capitol grounds. He has pleaded not guilty and is still awaiting trial from prison...
PUBLIC SAFETY・11 DAYS AGO

A federal judge said Friday that the Jan. 6 Capitol riot was no time to take a child sightseeing. A woman who brought her 14-year-old son along with her to the attempted insurrection has been sentenced to prison time for her participation in it. Virginia Marie Spencer will spend three months in federal prison and must report for incarceration by Feb. 25. She’ll also spend three years on probation. Judge Colleen Kollar-Kotelly told Spencer, “It must have been a traumatic experience to witness this kind of violence. It’s a complete lack of judgment on your part.” Spencer’s husband Christopher was also arrested for allegedly taking part in the mob attack. He has pleaded not guilty.
PUBLIC SAFETY・10 DAYS AGO
iheart.com

In the aftermath of the now infamous incident the government's handling of the situation has been exceptionally suspicious. Federal authorities won't explain why three men who participated in the Capitol riot on Jan. 6, 2021, have mysteriously disappeared from the FBI's Capitol Violence Most Wanted list. One unidentified man wore...
PROTESTS・12 DAYS AGO
BBC

Capitol riot: What happened to these rioters?

On 6 January, 2021, people around the United States were shocked by images coming from the US Capitol. The pictures - many of which were captured by news agency photojournalists on hand to document the vote certifying Joe Biden's electoral win - depicted rioters trespassing in government offices, or roaming the Senate chamber, or assaulting police officers.
PROTESTS・12 DAYS AGO
WJLA

Capitol rioters identified by 7News: Where are they now?

7News quickly started identifying people who breached the inside of the U.S. Capitol on January 6th. I-Team Investigator Scott Taylor tracked down faces with names and learned more about the rioters' past. 7News spent days pouring over social media in the aftermath of the Capitol Riot. The FBI did too....
PROTESTS・11 DAYS AGO
KTVZ

Two friends who entered the US Capitol together on January 6, one of whom boasted about breaking in and smoking a joint, were sentenced to 30 days in jail each for unlawfully parading in the building. “This wasn’t Bill and Ted’s Excellent Adventure,” Judge Tanya Chutkan said before handing down...
DESCHUTES COUNTY, OR・12 DAYS AGO
erienewsnow.com

Over 700 people have been charged for their involvement in the riots on the Capitol, five of those individuals are from our region. We start in Crawford County with Jeremy Vorous, according to the United States Department of Justice, he was charged with three different crimes, including knowingly entering or remaining in any restricted building or grounds without lawful authority.
CRAWFORD COUNTY, PA・11 DAYS AGO
WWJ News Radio

Jenna Ryan, 51, has become a polarizing figure online since tweeting last March that she won’t go to jail for her role in the US Capitol riots on Jan. 6. She was later sentenced by a judge to 60 days in jail for her role on Jan. 6.
PROTESTS・12 DAYS AGO
WTOP

Where we are with cases against the accused Capitol rioters

As the one-year anniversary of the storming of the U.S. Capitol on Jan. 6 arrives, hundreds of cases against the 613 men and 91 women charged that day continue to slowly move through D.C. courts. “The D.C. courts have never had this many cases in their docket history, in a...
PROTESTS・12 DAYS AGO