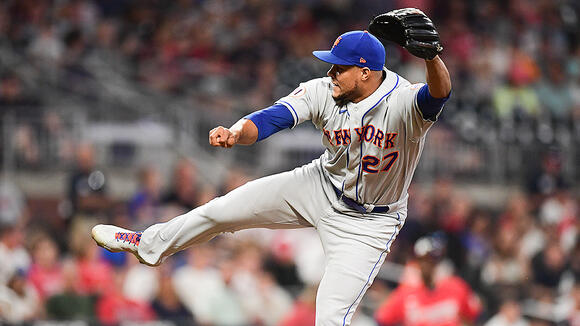 BOSTON (CBS) — The Red Sox have a giant hole in their starting rotation, but they also need some help at the back end of the bullpen this offseason. Chief Baseball Officer Chaim Bloom is scouring near and far to find help in that area, and is reportedly interested in someone who closed games in New York a few years back.

The Red Sox have reportedly expressed interest in free agent reliever Jeurys Familia, according to WEEI’s Rob Bradford . Jeurys, 32, hasn’t closed since 2016, when he saved 51 games for the New York Mets and earned an All-Star nod. But he’s been a solid late-inning reliever for much of his career, with a nasty sinker and a four-seam fastball that hovers in the high-90s. For his 10-year career, Familia has locked down 125 saves in his 158 opportunities, with a 32-25 record and a 3.28 ERA.

The righty is coming off a solid 2021 season where he threw 59.1 innings over 65 appearances, the majority of which came in the seventh inning or later. Familia went 9-4 with a 3.94 ERA and a 1.416 WHIP, striking out 72 batters while issuing just 10 walks. He did, however, get bit by the long ball, surrendering a career-high 10 homers on the year.

The Red Sox have a big question mark at the back end of the bullpen with Matt Barnes’ status as closer up in the air following the reliever’s second-half struggles in 2021. Barnes will be back in 2022, but his role is unknown. Ryan Brasier, Josh Taylor and Darwinzon Hernandez are set to return to Boston’s bullpen mix, while Adam Ottavino and Hansel Robles are both free agents. The Red Sox do have a potential lock-down guy for late innings in Garrett Whitlock, but the 25-year-old may make his way to the starting rotation based on how things shake out this offseason.

But expect the Red Sox to be connected to a number of relievers this winter, as Bloom looks to build the team’s bullpen for 2022.

There are a lot of parallels between the Yankees and the Boston Red Sox. Fierce rivals in the AL East, they are also rivals when it comes to free agency. Their willingness to spend and desire to add championships matches that of their counterparts. Naturally, both teams are forces to...
MLB・23 HOURS AGO
MassLive.com

The Boston Red Sox are expected to add a position player, most likely an outfielder, when the MLB lockout ends and free agency resumes. Chief baseball officer Chaim Bloom made a surprise last-minute trade before the lockout, dealing starting right fielder Hunter Renfroe to the Brewers for Jackie Bradley Jr. and two prospects.
MLB・1 DAY AGO
Inside The Dodgers

Joe Kelly is quite the character around Major League Baseball. With two championships under his belt across a 10-year career, Kelly has made his name known in a big way. He took one World Series against the Dodgers in 2018 and another with Los Angeles in 2020, finally bringing a title back to the ...
MLB・2 DAYS AGO
WFAN Sports Radio

Tyler White agreed to terms for a minor league contract with the Milwaukee Brewers.
MLB・2 DAYS AGO
WFAN Sports Radio

Despite 609 career home runs and seven All-Star appearances, the former Cubs slugger hasn't come close to being elected in his nine years.
MLB・1 DAY AGO
Inside The Dodgers

Jonathan Papelbon joined Rob Bradford on the Live BP podcast to make it clear he has no intention of following in the footsteps of his former teammate Jon Lester, saying he will never announce his retirement.
MLB・1 DAY AGO
FanSided

The one thing — the one thing — Yankees fans could reliably count on Gleyber Torres to provide, even during his darkest times in 2020 and 2021, might have just disappeared thanks to an architect’s whim. So, in case you’re counting, the Yankees signed Gerrit Cole, then...
MLB・16 HOURS AGO

Jonathan Papelbon joined WEEI’s Live BP Show and spoke about the backstory behind why he and Bryce Harper went at it in the Washington Nationals dugout in 2015.
MLB・23 HOURS AGO
Inside The Dodgers

Outfielder Oscar Colás, the No. 5 international prospect according to MLB Pipeline, came to terms on a $2.7 million deal with the Chicago White Sox, MLB.com’s Jesse Sanchez reported Saturday. According to Sanchez, the Sox and outfielder Erick Hernandez agreed to terms on a $1 million deal. MLB Pipeline ranks Hernandez as the No. 28 international prospect. Colás, who was born in Santiago de ...
MLB・2 DAYS AGO
survivinggrady.com

My appetite for Red Sox video content is so insatiable that when there are no new games to watch, I watch old games. And when I need to shake things up from watchin old games, I watch commercials featuring Red Sox players. It’s a lonely life. But one I have to live.
MLB・2 DAYS AGO
Inside The Blue Jays

The 2021 Phillies were a top heavy team, both in terms of production and salary. Given that level of top talent, which players from last year's team have a shot at reaching Cooperstown?
MLB・16 HOURS AGO
Inside The Phillies

Nomar Garciaparra was one of several stars in attendance for the Los Angeles Rams’ playoff game Monday night, and he looks like he can still hit .300.
MLB・1 HOUR AGO