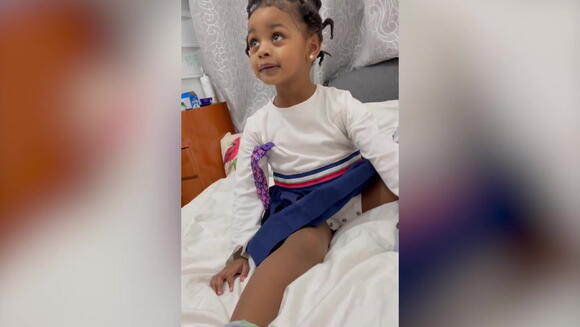 Cardi B has amused fans by revealing her daughter Kulture’s reaction to learning that she was becoming a big sister to a baby brother.

The WAP rapper, who shares her three-year-old daughter and two-month-old son with husband Offset , shared her daughter’s reaction to the news in response to a fan who questioned on Twitter: “What was Kulture’s reaction when you told [her] you were having another baby and that it was a boy?”

In response to the inquiry, Cardi B shared a video of the toddler, in which Kulture could be seen insisting that she wants a “baby sister”.

“I want a baby sister,” the three year old told her mother, to which Cardi B responded: “Yeah, but it’s a brother.”

The clarification did little to comfort Kulture, who continued to tell her mother that she wanted a baby sister.

“Yeah, but it’s a boy,” the rapper can be heard telling her daughter, to which the three year old said: “No, a baby sister.”

On Twitter, where the video has been viewed more than 200,000 times, fans were amused by the toddler’s less-than-enthusiastic response to the news that her parents would be having a son.

“She was NOT having it,” one person tweeted in response to the video, while another said: “My girl Kulture told mommy this is not up for debate or discussion. It’s a baby sister. Those are my terms. Lmao.”

Someone else joked: “You heard her. Make her a little baby sister…”

While Kulture did not appear pleased with the news that she was becoming a big sister to a brother initially, Cardi B revealed in another tweet that her daughter eventually came around to the idea and now “loves it”.

“She loves it. Only get sad when she wants to play but the baby needs silence to sleep,” she responded to another fan who asked how Kulture likes being a big sister.

However, the 29-year-old performer did note during an interview with Good Morning America that it can be “a lot” juggling the two children, as Kulture gets “a little bit territorial sometimes”.

Cardi B and Offset welcomed their second child, whose name has not yet been revealed, on 4 September. The couple shared the news with a photo taken of the two of them cradling the newborn in the hospital.

‘When Did My Baby Get So Big?’ Hilary Duff’s Best Pics With Daughter Mae

Hilary Duff introduced her daughter Mae via Instagram one week after giving birth. “Most people post this on the first day … but you’re a 3rd child Mae Mae,” the Younger star, 33, captioned a Wednesday, March 31, Instagram post. “Soooo it’s happening on the seventh. Happy week earth side little bit! We love you so.”
CELEBRITIES・14 DAYS AGO
E! News

Watch: Hilary Duff Talks STRUGGLES of Being a Child Star. That seemed to be Matthew Koma's thinking when his wife, Hilary Duff, thought she spotted one of her exes while out on a dinner date at a Japanese restaurant. The 34-year-old musician used the opportunity to playfully tease the How I Met Your Father star and captured the hilarious exchange on video.
CELEBRITIES・1 DAY AGO
iHeartRadio

The Most Extravagant Gifts Cardi B & Offset Have Gotten Kulture, From Birkins to Bling

Cardi B and Offset always chosen to go big when it comes to giving gifts to their little girl. While many parents can relate to spoiling their first-born, Kulture Kiari Cephus never receives anything less than the royal treatment. The toddler is already building her luxury bag collection (taking after her mama) and has designer drip for days.
CELEBRITIES・8 DAYS AGO

Cardi B: Is Spilling The Tea After Being Awarded Over $4 Million In Slander Lawsuit

Cardi B opens up about winning the lawsuit against YouTuber Tasha K. She was awarded nearly $3 million in punitive damages and attorneys’ fees in her lawsuit against YouTuber Tasha Kebe, a.k.a. Tasha K, per Billboard.  I don’t know about you but that is a lot of money. Jurors ruled Tuesday that Kebe is responsible […]
CELEBRITIES・2 DAYS AGO
iHeartRadio

Cardi B Says She Was 'Extremely Suicidal' After Alleged Online Harassment

Cardi B is opening up about her struggle with mental health and suicidal thoughts. On Thursday, the Grammy-winning artist testified in a court hearing over allegations that YouTuber Latasha Kebe, who goes by Tasha K, made false claims about Cardi to her followers on social media and the video sharing platform, where she has 1 million followers. In a lawsuit filed in 2019, Cardi's legal team cited YouTube videos and social media posts, in which Kebe allegedly made false claims as part of a “malicious campaign” to hurt Cardi's reputation, according to Billboard.
CELEBRITIES・13 DAYS AGO
rolling out

Tasha K is still smarting after she lost the $1 million libel lawsuit filed by rapper Cardi B. And now the judge is also ordering the YouTuber to pay Cardi almost $2 million more in punitive damages. Cardi was awarded $25,000 in medical fees which reportedly is a reduction of...
ATLANTA, GA・2 DAYS AGO

Lacey Chabert's 5-year-old daughter just found out her famous mother played Gretchen Wieners in Mean Girls, and her reaction was so fetch!. During an appearance Tuesday on The Kelly Clarkson Show, the 39-year-old actress was asked if her daughter, Julia, had seen the iconic 2004 comedy starring herself, Lindsay Lohan, Amanda Seyfried and Rachel McAdams. Turns out, Julia has, in fact, seen some snippets, prompting the 5-year-old to confront her mother about it.
CELEBRITIES・2 DAYS AGO
The Independent

People can’t believe how similar this mother and daughter look: ‘The mom genes are literally so strong’

A mother and daughter TikTok duo have addressed the frequent comments they receive about their likeness with a new video showing them side-by-side.Danielle Sylvester, who goes by the username @slyvester_danielle_ on TikTok, frequently posts the funny interactions she has with her 18-year-old daughter, Thyri Frazier, on the app.In a recent video, however, the pair acknowledged the resemblance they share, with Frazier, dressed in a black top with her hair pulled back, joined by her mother, who was dressed in a similar outfit.The mother and daughter then lip-synched a viral made-up conversation between Kylie Jenner and her daughter Stormi Webster, in...
BEHIND VIRAL VIDEOS・1 HOUR AGO
Insider

Kanye West told Hollywood Uncovered that he's decided not to tweet and overshare about his divorce from Kim Kardashian.
CELEBRITIES・2 DAYS AGO
People

Meghan McCain and Her Husband 'Got Very Sick' with COVID, She Reveals: 'Hard for Me to Shake'

Meghan McCain is on the mend — albeit slowly — after a stressful bout with COVID-19 that left her feeling "sad and pessimistic" and frustrated with the country's public health strategy, she said Wednesday. The former View co-host and conservative commentator revealed her diagnosis in a piece for...
PUBLIC HEALTH・2 DAYS AGO

An individual has called out a lounge after they were denied entry because they were wearing a skirt and not “dressing his gender”.Pako Zolanski, 25, who goes by the username @pakozolanski on TikTok, recently uploaded a video taken outside of Monticello ATL, a lounge in Marietta, Georgia, where they had gone to celebrate a friend’s birthday.However, in the clip, a manager for the lounge can be seen explaining why the 25-year-old, who uses he/she/they pronouns, according to their TikTok bio, would not be allowed inside.“Let me explain. It’s just like when you go to some places, they say: ‘We can...
BEHIND VIRAL VIDEOS・1 DAY AGO
Audacy

Tiffany Haddish addresses recent DUI and other grief with humor: 'It's been really hard'

In a recent interview, comedian Tiffany Haddish addresses her recent DUI and other grief with humor, though MADD didn’t find her stance very funny.
CELEBRITIES・2 DAYS AGO
ETOnline.com

Chris Hemsworth is proving that it no matter how famous you are, there’s still time to embarrass your younger brother on the internet. On Thursday, the Thor star celebrated his brother, Liam’s, 32nd birthday with a series of shirtless photos. While the pictures of Liam no doubt look good, Chris apparently thinks there's more work to be done.
CELEBRITIES・14 DAYS AGO
The Independent

This TikTok gives a whole new meaning to the phrase, “I tested positive”.In a hilarious video that now has over 16 million views, TikToker Hannah Alexis Grace shared her boyfriend’s confused reaction to finding out she’s pregnant over text.The TikTok begins with screenshots from the couple’s conversation, with a voiceover saying “Here’s how telling my boyfriend I’m pregnant went.” Hannah tells her partner, Charlie, that she finally knows why she feels ill, and sends him a picture of a positive pregnancy test. His response? “Are you joking me”.He asks his girlfriend if anyone knows she’s positive, to which she responds...
RELATIONSHIP ADVICE・2 DAYS AGO
Wyoming News

When Marilyn Monroe learned she was underpaid, she had a bold response

When Marilyn Monroe discovered her costar was being paid more than three times more than her, she said no more. Experts now say this is an early instance of Time's Up. Tune in Sunday at 9 p.m. ET to watch CNN's new series "Reframed: Marilyn Monroe."
CELEBRITIES・12 DAYS AGO
The Independent

Kristen Bell’s daughter questioned doctor before her mom’s colonoscopy: ‘It was great’

Kristen Bell has revealed that at her latest colonoscopy appointment, her eight-year-old daughter, Lincoln, confronted her mom’s doctor about the procedure.While appearing on Jimmy Kimmel Live! on January 25, Bell, 41, recalled how she recently got her first routine colonoscopy, an exam that “detects any changes or abnormalities” in the rectum and large intestines, per Mayo Clinic. Before the examination began, Bell’s daughter, Lincoln, stepped in to ask the doctor a few questions."She was sitting there, and we were getting the paperwork or whatever,” Bell explained. “And she looks at my doctor with this sly look, because you can...
CELEBRITIES・1 DAY AGO
homenewshere.com

Giant Dogs Get New Baby Brother To Look After | The Dodo

German shepherd and yellow Lab looked out for each other their whole lives — now they have someone new to watch over 💜. Keep up with Kona and Nala and all their adventures on Instagram: http://thedo.do/konaandnala. Introducing Dodo swag! https://shop.thedodo.com/. Love Animals? Subscribe: http://thedo.do/2tv6Ocd. ¿Hablas español?: https://thedo.do/2BsuN4o.
PETS・11 DAYS AGO
GMA