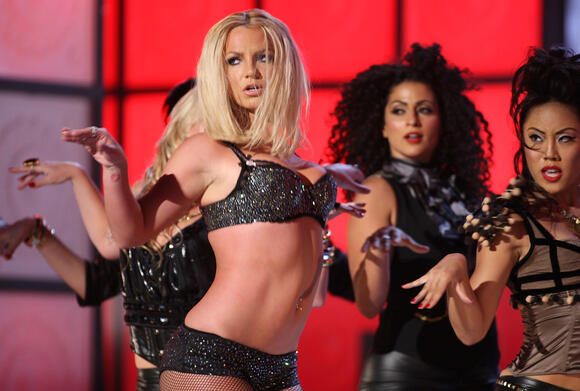 In the mid-2000s, few people were more famous than Britney Spears . But as she began to stumble in her personal life, the price of the public’s fascination was more than just a few nasty late-night jokes. Paparazzi swarmed Spears’ home and her family, turning the singer into a tabloid punching bag. But when you’re a platinum-selling pop princess, the show goes on even when you desperately need an intermission. In the midst of madness, Spears began recording an album that would become her defining statement, 2007’s Blackout .

The latest episode of our Amazon Original podcast Rolling Stone’s 500 Greatest Albums revisits Blackout at a time when Spears’ music — and the raw treatment she received from the public and the press — is being revisited and rethought in a major way. Collaborators and friends — from Teresa LaBarbera, the A&R rep who was one of Spears’ closest allies, to the producers like Danja and Bloodshy & Avant who crafted visceral hits like “Piece of Me” and “Gimme More” — join Rolling Stone Senior Writer Brittany Spanos to tell the story of how Spears made classic songs in the eye of a hurricane. The result was an album that stood as a middle finger to Spears’ critics and established a dark, danceable sound that influenced pop for years to come.

In 2003, Rolling Stone published its definitive countdown of the 500 Greatest Albums of All Time , the most popular and most argued-over list in the magazine’s history. In 2020, we completely remade the list, adding more than 150 new titles. With the Amazon Original podcast Rolling Stone’s 500 Greatest Albums , we’re delving further into the making and meaning of many of the records that made the cut, with exclusive insights from the artists who created them — and those who know them and their music best.

Hosted by Brittany Spanos, Rolling Stone’s 500 Greatest Albums appears exclusively on Amazon Music , with a new episode appearing each week. Check out the Blackout episode above.

Britney Spears wants a judge to pull the plug on her dad’s ability to tap her fortune for his legal representation as she investigates his purported financial “self-dealing” and alleged surveillance inside her home during her 13-year conservatorship. In a new filing ahead of a court showdown Wednesday, the pop star and her lawyer Mathew Rosengart claim Jamie Spears already has “siphoned” more than $6 million from her coffers while engaging in “abusive and bullying conduct” that included secretly recording her in her bedroom. To bolster their claims, they submitted a sworn statement from their private investigator Sherine Ebadi, a former FBI...
CELEBRITIES・15 HOURS AGO
Rolling Stone

Canadian producer Kaytranada and R&B singer H.E.R. shared the stage Tuesday for a performance of the song “Intimidated” on The Tonight Show. The track, released in November, comes off the Grammy-award winner’s eponymous EP. The three-song release also features collaborations with Thundercat and Mach-Hommy. The pair previously teamed up on H.E.R.’s 2021 debut studio album, Back of My Mind, with Kaytranada providing production on the track “Bloody Waters.” H.E.R. provides live piano accompaniment during segments of the intimate, laid-back performance, while Kaytranda creates the song’s groove-filled soundscape from behind an arsenal of synthesizers. The 29-year-old producer is reportedly working on a follow-up to his Grammy Award-winning 2019 LP, Bubba, which was named Best Dance/Electronic Album in 2021. The album’s single “10%” also took home the award for Best Dance Recording.
THEATER & DANCE・13 HOURS AGO
Rolling Stone

UPDATE (12/1): The Weeknd has offered up a new remix of “Sacrifice” featuring Swedish House Mafia that comes with a completely new music video as well. The “alternate world” clip isn’t nearly as creepy as the original, though it does boast some strange touches as white-eyed, levitating dancers achieve ultimate euphoria in what looks like a high school gymnasium.
MUSIC・6 DAYS AGO
HollywoodLife

Britney Spears’ sons Jayden James and Sean Preston are about to gain a stepfather — find out how they feel about her fiancé Sam Asghari and the couples’ upcoming nuptials. Britney Spears’ life has completely changed since she was freed from the 13-year conservatorship just two...
RELATIONSHIPS・7 DAYS AGO

"Now looking back, like what a weird f****** thing to do," Jamie Lynn Spears said of her big sister's purported incentive for their parents' marriage to end.
RELATIONSHIPS・1 DAY AGO
Newsweek

A tearful Jamie Lynn Spears has spoken out about her rift with older sister Britney Spears in a new interview to promote her book, "Things I Should Have Said."
CELEBRITIES・7 DAYS AGO
AOL Corp

The feud between Britney Spears and her younger sister, Jamie Lynn Spears, continued Tuesday, with Britney responding to Jamie Lynn's latest comments on their relationship. In an afternoon post that was briefly deleted, Britney looked back on a particularly rough time — the period following her 2002 breakup with Justin Timberlake. She remembered marveling at the fact that Jamie Lynn, who turned 12 in April 2003, was enjoying chocolate milkshakes, watching TV and floating on a raft in the pool.
CELEBRITIES・19 HOURS AGO
Newsweek

Pop star Britney Spears has sent her sister, Jamie Lynn Spears, a cease and desist letter, while she continues to battle with dad Jamie Spears over her money.
CELEBRITIES・6 HOURS AGO

Britney Spears has sent a legal letter to her younger sister, Jamie Lynn Spears, stating that she won’t be bullied in Jamie Lynn’s new book. The cease and desist letter, sent by the pop star’s attorney Mathew Rosengart, comes amid a public back-and-forth on social media between the two sisters that has exploded during Jamie Lynn’s media tour for her memoir, “Things I Should Have Said.” “As you know, I represent your sister Britney Spears, and I write at her request concerning the above-referenced matter,” Rosengart wrote in the letter, which has been obtained by Variety. “We write with some hesitation because...
CELEBRITIES・13 HOURS AGO
thebrag.com

Surprisingly enough, Britney Spears former backing guitarist doesn’t come from a pop background, but rather, used to dabble in metal music. “I was playing in a hair metal tribute band,” shared Zach Comtois, who played with Spears for the full run of her Las Vegas residency, on Rob Scallon’s YouTube channel.
MUSIC・8 DAYS AGO
US Magazine

Shutting it down. Britney Spears blasted her sister, Jamie Lynn Spears, in a strongly worded cease and desist letter after the pair’s recent back and forth on social media. The 40-year-old pop star took aim at the 30-year-old Zoey 101 alum’s memoir, Things I Should Have Said, and recent sit-down interviews in the letter, which was sent through her attorney, Mathew Rosengart, asserting that she will “no longer be bullied” for her family’s benefit.
CELEBRITIES・4 HOURS AGO
Newsweek

The book is set to feature Jamie Lynn Spears "opening up for the first time, telling her unfiltered story on her own terms."
CELEBRITIES・2 DAYS AGO

The "West Side Story" star posted a video on Twitter of her reading Spears' post as an audition monologue.
CELEBRITIES・1 DAY AGO
HollywoodLife

Britney Spears seemingly responded to her sister Jamie Lynn Spears’ latest podcast interview by sharing a shocking message that accused her family of not supporting her after she and Justin Timberlake broke up, and admitted his family was ‘all’ she ‘knew for many years.’. Britney Spears,...
TV SHOWS・20 HOURS AGO
Insider

IN HER OWN WORDS: How Britney Spears fought for her freedom from an 'abusive' conservatorship and won

Trapped in a legal prison of her father's design, this comic explores how the biggest pop star in America fought for over a decade to free herself.
CELEBRITIES・4 HOURS AGO
The Independent

Britney Spears has sent a cease and desist letter to her younger sister Jamie Lynn over her forthcoming memoir.During an interview last week, the younger Spears discussed Britney’s struggles with mental health and also accused her of locking the two of them in a room with a knife.In response, Spears’ lawyers have sent Jamie Lynn a letter regarding the book, titled Things I Should Have Said, stating: “We write with some hesitation because the last thing Britney wants is to bring more attention to your ill-timed book and its misleading or outrageous claims about her.”The letter also accuses Jamie...
CELEBRITIES・10 HOURS AGO
Mix 95.7FM

Britney Spears sent a message to her little sister after Jamie Lynn accused her big sister of holding a knife at her. On Friday (Jan. 14), the "Toxic" singer addressed a story Jamie Lynn told during a recent interview in which she claimed her older sister once held her captive in a room while brandishing a knife.
CELEBRITIES・5 DAYS AGO
kiss951.com

Jamie Lynn Spears sat down for her first interview following her sister Britney Spears’ termination of her conservatorship. Jamie Lynn, 30, spoke with Good Morning America‘s Juju Chang in an interview today (January 12), telling the anchor that she was happy when she found out Britney’s conservatorship ended. However, when the conservatorship was put into place, Jamie Lynn was 17 and about to have a baby, so she said she “didn’t understand what was happening, nor was I focused on that. I was focused on the fact that I was a 17 year old about to have a baby.”
CELEBRITIES・7 DAYS AGO
WHAS 11

Jamie Lynn Spears is recalling a painful time in her sister's life. During an interview on the Spotify exclusive podcast Call Her Daddy, in promotion of her new memoir, Things I Should've Said, Britney Spears' younger sister reflects on the pop star's romance and split from Justin Timberlake. Britney and...
CELEBRITIES・1 DAY AGO
Rolling Stone

In the music video for “Meta Angel,” FKA Twigs doubles as both hunter and prey as she puts an arrow through her heart, although not in the way Cupid may have intended. The song appears on the musician’s latest mixtape Caprisongs. Leaning into the thematic notion of rebirth on “Meta Angel,” FKA Twigs takes an archer’s approach to killing off the past self holding her back. With accuracy as sharp as her eyeliner, the singer takes to the roof of a building above a park and shoots an arrow straight toward a suspecting, although less abrasive version of herself awaiting the...
MUSIC・3 HOURS AGO