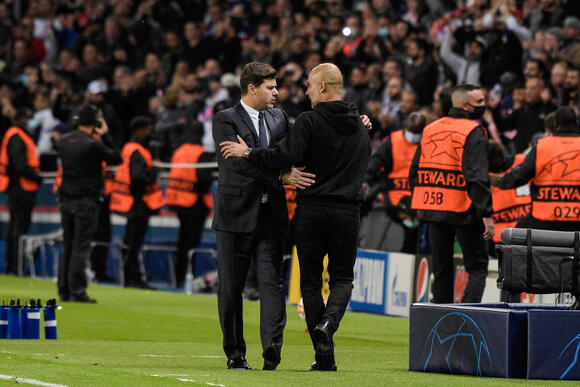 Last season's Champions League finalists City only need one point in order to progress to the knock-out stages of this season's edition of Europe's premier competition, once again.

Manchester City have the opportunity to gain that elusive point on Wednesday night when they welcome a star-studded Paris Saint-Germain side to the Etihad Stadium. A win for the Blues would also confirm them as Group A winners.

In the reverse fixture, PSG came out on top in a lively affair at the Parc Des Princes courtesy of goals from Idrissa Gueye and a club-first for legendary forward, Lionel Messi.

Mauricio Pochettino gained another scalp against a familiar foe in Pep Guardiola. The two went head-to-head more regularly when the Argentine was manager of Tottenham Hotspur.

And it looks like a move back to England could be on the cards.

Despite his success in Ligue 1 so far this season, Mauricio Pochettino is being heavily linked with the vacant managerial position at Manchester United.

The Red Devils have attempted to appoint PSG's head coach on numerous occasions, but each time a certain stipulation has stood in their way.

Speaking during his pre-match press conference ahead of the game at the Etihad Stadium, Pep Guardiola has been discussing the qualities of his managerial counterpart.

He continued by explaining, "You can be a good manager and not win the trophy. You can be excellent at coaching and dealing with humans without winning titles."

It was basic arithmetic, really. In the same way that two plus two equals four, an almost impregnable defence plus a prolific, 20-goals-a-season striker equals a title-winning team.Two Premier League clubs found themselves stuck on the first side of that equation last summer. Each had one of the best defences in Europe but lacked a player regularly converting at the other end. Both intended to do something about it during the transfer window. One could and did, the other tried and couldn’t. So in that case, why is the team who didn’t spend £97.5m on a centre-forward sitting at the...
PREMIER LEAGUE・2 DAYS AGO

Manchester City walked away with a deserved 1-0 win over Chelsea at the Etihad Stadium, courtesy of a Kevin De Bruyne belter. The Sky Blues extended their lead to 13 points at the top of the table with yet another dominant display from start to finish. Speaking to the press...
PREMIER LEAGUE・1 DAY AGO
CityXtra

It is no secret that the bedrock of Manchester City's success in recent season has been the solid defence in front of Ederson. With the resurgence of John Stones, as well as the addition of Rúben Dias from Benfica for a reported fee of £62 million, Manchester City's rearguard has become arguably the most important part of the squad.
PREMIER LEAGUE・2 DAYS AGO
Daily Mail

In the away section behind one of the goals at The Etihad, silverware glinted now and again in the winter sunshine. The Chelsea fans, ranged across three tiers, resolutely held up replicas of the Champions League trophy many had brought with them from London and brandished them as a reminder of their victory over Manchester City in the final in Porto last May.
PREMIER LEAGUE・2 DAYS AGO

Guardiola's men can extend their advantage at the top of the league with a win over the west Londoners at the Etihad Stadium on Saturday, a week after their FA Cup third-round victory against Swindon Town at the County Ground. Chelsea boss Thomas Tuchel conceded in his pre-match press conference...
PREMIER LEAGUE・2 DAYS AGO
newschain

Pep Guardiola: Title race is not done despite Manchester City’s win over Chelsea

Pep Guardiola hailed a crucial victory after Manchester City took a huge step towards retaining the Premier League title with a hard-fought 1-0 win over rivals Chelsea. Kevin De Bruyne produced a moment of magic to settle a tight contest at the Etihad Stadium on Saturday with a brilliant goal 20 minutes from time.
PREMIER LEAGUE・2 DAYS AGO
Daily Mail

DANNY MURPHY: Manchester City's dominance is all down to how well Pep Guardiola shuffles his pack

It isn’t luck that Manchester City have coped better with Covid conditions than anyone else. The style of play under Pep Guardiola conserves energy and has allowed them to win 12 games in a row during a pandemic period of fixture congestion and enforced withdrawals. The way they’ve built...
PREMIER LEAGUE・2 DAYS AGO
The Independent

The Etihad Stadium plays host to the top of the table Premier League clash between Manchester City and Chelsea this afternoon. City are first in the league with Chelsea second coming into this game, but with completely different form in the competition. Chelsea will be hoping to end their poor run, but they will take inspiration from some promising displays in the Carabao Cup. Today’s match is Chelsea’s second against City in the league this season and their last chance to peg the reigning champions back in their pursuit of the title.Follow Man City vs Chelsea LIVECity will be...
PREMIER LEAGUE・2 DAYS AGO

There are so many facets of football that make Pep Guardiola's Manchester City so great. They are experts in keeping possession, flawless in their build-up play, but it is one of the very basics of football that makes them such a relentless winning machine - their pressing. Telling a footballer...
PREMIER LEAGUE・15 HOURS AGO
BBC

Manchester City manager Pep Guardiola says his side "deserved" their 1-0 win over Chelsea at the Etihad stadium. Watch highlights of the day's Premier League action on Match of the Day on Saturday, 15 January on BBC One and iPlayer at 22:30 GMT.
PREMIER LEAGUE・2 DAYS AGO
The Independent

What the papers sayDonny van de Beek has rejected his reported loan deal to Newcastle from Manchester United, according to the Telegraph. The 24-year-old midfielder had been in the sights of the Magpies as they battle against relegation, but the club’s unstable position was also said to be what caused Van de Beek to turn the deal down.Newcastle have struggled with other transfer prospects too but, according to the Daily Express, the club is optimistic a deal for Sevilla defender Diego Carlos can be closed this week. The 28-year-old Brazilian reportedly wants to move to the Premier League and seems...
PREMIER LEAGUE・18 HOURS AGO
CityXtra

With their failed pursuit of Tottenham centre-forward Harry Kane in the summer transfer window, Manchester City have struggled to find a successor to legendary striker Sergio Aguero. Add to that Ferran Torres’ departure to Barcelona in recent weeks, as well as Liam Delap’s long-term injury lay-off throughout the course of...
PREMIER LEAGUE・11 HOURS AGO
The Independent

Ralf Rangnick has encouraged Manchester United’s players to hold each other to account after Cristiano Ronaldo warned their poor season will continue if their mentality does not improve.Having edged past Aston Villa 1-0 in the FA Cup third round on Monday, the sides will go toe-to-toe once again in the Premier League on Saturday evening.United enter the weekend seventh in the standings after things unravelled following a positive summer in which Jadon Sancho Raphael Varane and Ronaldo arrived.The latter this week said they need to start afresh in 2022 and warned “it will be a nightmare” if they do...
PREMIER LEAGUE・2 DAYS AGO
CityXtra

The upcoming summer transfer window is expected to be one of significant business for the reigning Premier League champions, as they look to prioritise the signing of a new centre-forward to replace the recently departed and retired Sergio Aguero. However, while a top level striker is expected to be the...
PREMIER LEAGUE・12 HOURS AGO
CityXtra

In Ederson, Premier League champions Manchester City possibly have the most well-rounded goalkeeper in the world at their disposal. The Brazilian international is the embodiment of a modern-day number one and has been synonymous with Pep Guardiola’s reign of roaring success at the club since his arrival from Benfica in 2017.
PREMIER LEAGUE・7 HOURS AGO
The Independent

Steven Gerrard wants to keep Philippe Coutinho smiling after the Aston Villa debutant secured a hard-fought 2-2 draw that left Manchester United interim boss Ralf Rangnick deflated.Saturday evening’s Premier League encounter looked to be going the same way as their FA Cup tie at the start of the week, with Villa looking sharp but ultimately lacking a cutting edge against the Red Devils.A howler from Emiliano Martinez allowed Bruno Fernandes to open the scoring, with the Portuguese skipper adding another just as Villa threatened to level.Gerrard turned to former Liverpool team-mate Coutinho and got a dream response, with the Brazilian...
PREMIER LEAGUE・2 DAYS AGO