This Is the Most Dangerous Volcano on the Planet 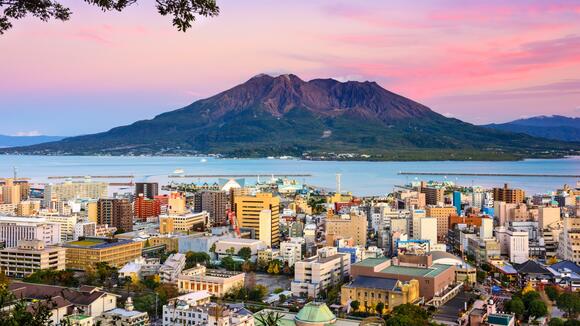 Massive volcanic eruptions are among the best-known moments in history. When Mount Vesuvius erupted in 79 AD, it destroyed the city of Pompeii and people for miles around it. Pompeii remains an area studied by archeologists. More recent eruptions are widely known parts of recent history. Millions of Americans can remember television coverage of the explosion of Mount Saint Helens in 1982. It continues to be considered a dangerous volcano.

Scientists have different ways of classifying types of volcanoes. For instance, a stratovolcano (or composite volcano) is a steep symmetrical cone built of lava flows, volcanic ash and other materials (some of the world’s highest mountains are stratovolcanoes). A lava dome is a comparatively small volcano built from dense lava flow.

A caldera, considered particularly damaging to the surrounding environment, is a depression in the earth caused when the edges of the volcano collapse inward. A shield volcano is large and flat and composed almost entirely of the lava flow. It is said to resemble a battle shield in shape. A pyroclastic shield is similar in form but formed mostly from rocks rather than fluid lava.

Not all volcanic eruptions are the same. Some are fairly calm and pose little threat to nearby inhabitants. Others can be violent, with catastrophic effects. Smaller volcanic events can be spectacular to witness from a safe distance, and many active volcanoes release dazzling lava without massive violent eruptions. Others, though, continue to pose major threats to cities around the world, even if they have previously erupted.

To identify the most dangerous volcano on the planet, 24/7 Wall St. reviewed data from the National Museum of Natural History’s Global Volcanism Program . Each volcano on the list meets at least three of the following criteria: at least one major eruption, multiple large eruptions, high-fatality eruption, frequent activity or significant lava effusion.

The most dangerous volcano in the world is Aira. Here are the details:

Aira is a massive caldera on the southern end of Japan’s Kyushu island. Currently, the city of Kagoshima, situated in the middle of the caldera that forms a scenic bay, is home to over 900,000 people. Japan’s most active caldera, Aira sees several small eruptions every year. Mindful of their precarious position, residents have put in place one of the most advanced seismologic monitoring systems in the world. They are also well-trained in evacuation procedures.

Click here to see all the most dangerous volcanoes on the planet.

The massive eruption under the Pacific ocean was just 40 miles away from Tonga. Footage on social media shows people fleeing the waves.
ENVIRONMENT・22 HOURS AGO
insideedition.com

A 72-million-year-old dinosaur embryo was discovered inside a fossilized egg. And scientists are calling it one of the best-preserved specimens of its kind ever found. The embryo, named Baby Yingliang, was found in southern China, and it belongs to a toothless theropod dinosaur. "After careful fossil preparation, basically we see...
WORLD・17 DAYS AGO
The US Sun

A TSUNAMI has slammed California with huge 4ft waves amid evacuation alerts in the US, Japan and Australia after a massive underwater volcano erupted off the coast of Tonga. It comes as waves of 2.7ft swept through the streets of the Pacific nation as locals scrambled to higher ground after the "violent" eruption of the Hunga Tonga-Hunga Ha'apai volcano.
CALIFORNIA STATE・16 HOURS AGO
Rolling Stone

‘The Fuse Has Been Blown,’ and the Doomsday Glacier Is Coming for Us All

One thing that’s hard to grasp about the climate crisis is that big changes can happen fast. In 2019, I was aboard the Nathaniel B. Palmer, a 308-foot-long scientific research vessel, cruising in front of the Thwaites Glacier in Antarctica. One day, we were sailing in clear seas in front of the glacier. The next day, we were surrounded by icebergs the size of aircraft carriers. As we later learned from satellite images, in a matter of 48 hours or so, a mélange of ice about 21 miles wide and 15 miles deep had cracked up and scattered into the sea. It...
EARTH SCIENCE・17 DAYS AGO

A giant asteroid over 3,500 feet wide is flying through space towards the Earth. Don’t worry, though, it isn’t going to hit us, but it will pass close by on January 18, 2022. Astronomers named it Asteroid 7498 (1994 PC1). The asteroid is roughly 2.5 times the height of New York’s Empire State Building. NASA considers it a potentially hazardous asteroid because of its size, and how close it flies close to the planet.
ASTRONOMY・5 DAYS AGO
Newsweek

Tsunami warnings have been issued in Tonga, Fiji, American Samoa and New Zealand after the Hunga Tonga Hunga Ha'apai volcano erupted.
ENVIRONMENT・1 DAY AGO
The Independent

An undersea volcano has erupted in spectacular fashion near Tonga, sending large tsunami waves crashing across the shore and turning the sky “black”.Satellite footage showed a huge plume erupting of the undersea Hunga Tonga Hunga Ha’apa volcano in a “violent” eruption which sent people on the Pacific island nation fleeing for higher ground.Tsunami waves were observed in Tonga's capital and the capital of American Samoa, a US-based tsunami monitor said.Waves waves measuring two feet in height were generated by the eruoption, a US-based Pacific tsunami monitoring centre has said. The Tonga Meteorological Services issued the warning in all of...
ENVIRONMENT・17 HOURS AGO
ABC7

An undersea volcano erupted near the island nation of Tonga, prompting a tsunami advisory for California, Oregon, Washington and Hawaii.
ENVIRONMENT・8 HOURS AGO

The entire west coast of the United States was under a tsunami advisory after the eruption in the South Pacific.
ENVIRONMENT・14 HOURS AGO
AFP

Frightened Tongans fled to higher ground Saturday after a massive volcanic eruption -- heard in neighbouring countries -- triggered tsunami warnings across the South Pacific. "A 1.2 metre tsunami wave has been observed at Nuku'alofa," Australia's Bureau of Meteorology tweeted. The latest eruption of the Hunga Tonga-Hunga Ha'apai volcano came just a few hours after a separate Friday tsunami warning was lifted due to the eruption. Mere Taufa said she was in her house getting ready for dinner when the volcano erupted.
ENVIRONMENT・23 HOURS AGO
scitechdaily.com

The dramatic collapse of Indonesia’s Anak Krakatau volcano in December 2018 resulted from long-term destabilizing processes, and was not triggered by any distinct changes in the magmatic system that could have been detected by current monitoring techniques, new research has found. The volcano had been erupting for around six...
ENVIRONMENT・1 DAY AGO
The Independent

An undersea volcano erupted in spectacular fashion near the Pacific nation of Tonga on Saturday, sending large waves crashing across the shore and people rushing to higher ground.There were no immediate reports of injuries or the extent of the damage as communications with the small nation remained problematic. Video posted to social media showed large waves washing ashore in coastal areas, swirling around homes and buildings. New Zealand's military said it was monitoring the situation and remained on standby, ready to assist if asked.Satellite images showed a huge eruption. The Tonga Meteorological Services said a tsunami warning was in...
ENVIRONMENT・23 HOURS AGO
The Independent

Scientists have spotted an “intruder” disturbing a forming star in a distant star system.Researchers watched as the object – which was not a part of the system – came close enough to the binary protostar that it interacted with the environment around it. As it flew past, it left a chaotic stream of dust and gas in its wake.Such events have been seen before in computer simulations. But they have remained largely theoretical.Now scientists say they have directly observed such a phenomenon, using the Atacama Large Millimeter/submillimeter Array (ALMA) and the Karl G. Jansky Very Large Array (VLA) telescopes.“Observational evidence of flyby events...
ASTRONOMY・2 DAYS AGO
scitechdaily.com

Clouds parted for a glimpse of one of the most dangerous volcanoes on Earth. Mount Vesuvius, located 12 kilometers (7.5 miles) southeast of Naples, Italy, is the only active volcano on Europe’s mainland. It is a composite stratovolcano, made up of pyroclastic flows, lava flows, and debris from lahars that accumulated to form the volcanic cone.
SCIENCE・3 DAYS AGO
AFP

Volcano triggers Tonga tsunami, alerts from Japan to US

An underwater volcano in the South Pacific erupted Saturday with a stunning blast, sending tsunami waves onto nearby Tonga and to the north in Japan, with warnings of dangerous ocean surges issued as far away as the US West Coast. Dramatic satellite images showed the long, rumbling eruption of the Hunga Tonga-Hunga Ha'apai send a huge mushroom of smoke and ash into the air and a shockwave across the surrounding waters. A tsunami wave measuring 1.2 metres (four feet) was observed in Tonga's capital Nuku'alofa, according to Australia's Bureau of Meteorology. The Japan Meteorological Agency said tsunami reached that country's Pacific coast, too, with waves as high as three meters (11 feet) possible.
ENVIRONMENT・15 HOURS AGO
Outsider.com

Researchers have been exploring Antarctica for decades. However, the largely uninhabited, frozen continent still holds countless mysteries. There are countless theories as to what could be hidden in the ice. Some believe that the continent holds UFO evidence. Others believe that there is a wealth of undiscovered life hidden on the frigid landmass and in its waters. Recently, researchers made a shocking discovery on Antarctica’s seabed.
SCIENCE・2 DAYS AGO
Inverse

Planets are all globes, right? Wrong. If they are like WASP-103b, then they are far from the perfect orbs we see in our mind’s eyes — rather, a new discovery reveals some planets might look more like a potato. The discovery — The planet, WASP-103b, is located around...
ASTRONOMY・4 DAYS AGO
Eos

Sensing Iceland’s Most Active Volcano with a “Buried Hair”

Icelandic legend tells of an outlaw named Grímur who hid in the highlands of the island after avenging the murder of his father. A widow assisted him, directing him to some remote lakes where he could sustain himself by fishing. However, there was already a giant living near the lakes. Grímur fought and killed the giant, so upsetting the giant’s daughter that she laid a curse on the landscape. From then on, fires would burn in the lakes and the surrounding woods would vanish.
EARTH SCIENCE・11 DAYS AGO
Newsweek

2021 Sixth Hottest Year on Record, Scientists Studying if Temperature Rise Is Speeding Up

With the eight hottest years on record all being within the past decade, climate scientists are worried the warming trend is accelerating.
SCIENCE・2 DAYS AGO