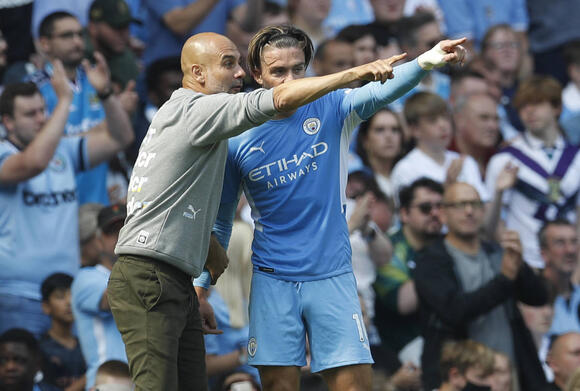 The Premier League champions can seal qualification to the knock-out stages of the Champions League if they win against the Ligue 1 side in mid-week.

However, it remains to be seen if summer signing Jack Grealish, who started at the Parc des Princes in September’s 2-0 defeat, will be available for Wednesday’s match.

Grealish missed City’s 3-0 win over Everton at the weekend after withdrawing from England duty due to injury, which put him in doubt to feature against PSG in mid-week.

Ahead of Wednesday's match at the Etihad, Guardiola provided an update on the fitness of the 26-year-old, who has scored twice for City since his £100 million switch from Aston Villa in the summer.

Speaking in his pre-match press conference, Guardiola said: "Jack Grealish is much better," which could mean that the Birmingham-born star could be involved in some capacity against Mauricio Pochettino's side.

City will also be without forward Ferran Torres for the game, as he recovers from a foot fracture in a bid to return to full first-team training in December, as per recent reports.

Last season’s Champions League finalists could both qualify for the knock-out stages and secure top spot in Group A with a win over PSG on Wednesday night.

The Sky Blues, who beat Club Brugge 4-1 prior to the international break, suffered a 2-0 defeat to PSG in matchday two in September - their first ever loss to the French side.

Goals from Idrissa Gueye and Lionel Messi secured the victory at the Parc des Princes for PSG, although it’s Guardiola’s side who have the upper hand in Group A ahead of Wednesday’s meeting.

Kevin De Bruyne scored a brilliant winner as Premier League leaders Manchester City moved 13 points clear with a 1-0 victory over second-placed Chelsea on Saturday.The Belgian playmaker, who had an unhappy spell at Chelsea early in his career, curled beyond Kepa Arrizabalaga from distance to settle a tight contest at the Etihad Stadium with 20 minutes remaining.It was a moment of magic worthy of winning any game but was the least City deserved having dominated against the side that beat them in last season’s Champions League final.Blue is the colour! 💙#ManCity pic.twitter.com/816nfRAo0M— Manchester City (@ManCity) January 15, 2022The win...
PREMIER LEAGUE・2 DAYS AGO
Yardbarker

Manchester City walked away with a deserved 1-0 win over Chelsea at the Etihad Stadium, courtesy of a Kevin De Bruyne belter. The Sky Blues extended their lead to 13 points at the top of the table with yet another dominant display from start to finish. Speaking to the press...
PREMIER LEAGUE・2 DAYS AGO
goal.com

Guardiola's men can extend their advantage at the top of the league with a win over the west Londoners at the Etihad Stadium on Saturday, a week after their FA Cup third-round victory against Swindon Town at the County Ground. Chelsea boss Thomas Tuchel conceded in his pre-match press conference...
PREMIER LEAGUE・2 DAYS AGO
CityXtra

It is no secret that the bedrock of Manchester City's success in recent season has been the solid defence in front of Ederson. With the resurgence of John Stones, as well as the addition of Rúben Dias from Benfica for a reported fee of £62 million, Manchester City's rearguard has become arguably the most important part of the squad.
PREMIER LEAGUE・2 DAYS AGO
The Independent

The Etihad Stadium plays host to the top of the table Premier League clash between Manchester City and Chelsea this afternoon. City are first in the league with Chelsea second coming into this game, but with completely different form in the competition. Chelsea will be hoping to end their poor run, but they will take inspiration from some promising displays in the Carabao Cup. Today’s match is Chelsea’s second against City in the league this season and their last chance to peg the reigning champions back in their pursuit of the title.Follow Man City vs Chelsea LIVECity will be...
PREMIER LEAGUE・2 DAYS AGO
San Diego Union-Tribune

Manchester City manager Pep Guardiola says his side "deserved" their 1-0 win over Chelsea at the Etihad stadium. Watch highlights of the day's Premier League action on Match of the Day on Saturday, 15 January on BBC One and iPlayer at 22:30 GMT.
PREMIER LEAGUE・2 DAYS AGO
CityXtra

In the modern era of Manchester City Football Club, there have been plenty of impressive teams. From Manuel Pellegrini's 2013/14 Premier League title-winning side - who caught top-flight leaders Liverpool in the dying months of the season, to Pep Guardiola's centurions - who made light work of all of their foes that season.
PREMIER LEAGUE・12 HOURS AGO
CityXtra

The upcoming summer transfer window is expected to be one of significant business for the reigning Premier League champions, as they look to prioritise the signing of a new centre-forward to replace the recently departed and retired Sergio Aguero. However, while a top level striker is expected to be the...
PREMIER LEAGUE・20 HOURS AGO
CityXtra

A Kevin De Bruyne special was enough to be the difference between Manchester City and Chelsea as the Premier League champions capped off their league double over the visitors in style. An incredibly dominant display almost looked like a repeat of the clash in September, with the Sky Blues far...
PREMIER LEAGUE・2 DAYS AGO

It was revealed that Manchester City had recorded revenue of £569.5 million during the 2020/21 season, with the club returning profit after making a £126 million loss in the previous year due to the financial impact of the COVID-19 pandemic. City, who won both the Premier League and...
PREMIER LEAGUE・1 DAY AGO
The Independent

Manchester City have gone 13 points clear in the Premier League as they defeated Chelsea 1-0 thanks to a superb Kevin De Bruyne strike.It was a game regarded as one Chelsea had to win as City are unlikely to drop many points for the rest of the season. But the Blues weren’t clinical enough in the final third.In the first half, Raheem Sterling was causing a lot of issues but Chelsea’s defence, particularly through Antonio Rudiger and Thiago Silva, held strong.Chelsea had dangerous counter attack but the final pass didn’t come off for the visitors angering manager Thomas Tuchel. The...
PREMIER LEAGUE・2 DAYS AGO
CityXtra

There are so many facets of football that make Pep Guardiola's Manchester City so great. They are experts in keeping possession, flawless in their build-up play, but it is one of the very basics of football that makes them such a relentless winning machine - their pressing. Telling a footballer...
PREMIER LEAGUE・23 HOURS AGO
fourfourtwo.com

Pep Guardiola has hailed the mentality and professionalism of his Manchester City players after taking a seemingly vice-like grip on the title race. The City manager is impressed by how his team have dealt with adversity on and off the pitch to maintain their charge towards a fourth Premier League success in five years.
PREMIER LEAGUE・1 DAY AGO
CityXtra

Manchester City will travel south to St Mary's this weekend, looking to extend their Premier League winning run to a staggering 13 matches ahead of the upcoming winter break. Kevin De Bruyne's 70th minute strike proved decisive at the Etihad Stadium last weekend, as Pep Guardiola's side overcame Chelsea to open up a 13-point gap between last season's Champions League finalists in the Premier League table.
PREMIER LEAGUE・1 HOUR AGO
CityXtra

Scoring his fifth Premier League goal in eight matches against Chelsea, Kevin De Bruyne proved to be the difference maker with an absolute belter of a strike in Manchester City's latest win at the Etihad Stadium that took them 13 points clear of the west London side in the league table.
PREMIER LEAGUE・1 DAY AGO
CityXtra

Patrick Roberts’ steep £11 million signing from Fulham to Manchester City was met with several expectations, considering the youngster was one of English football’s most promising talents. However, a host of fruitless loan spells to the likes of Celtic, Girona, Norwich City, Middlesbrough, Derby County and Troyes...
PREMIER LEAGUE・1 DAY AGO