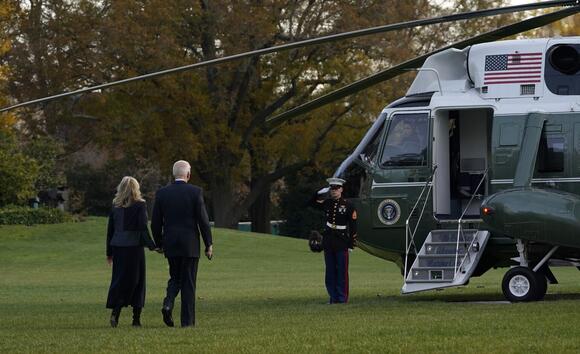 The president and first lady Jill Biden have long celebrated Thanksgiving on the well-heeled Massachusetts island off of Cape Cod. But with most members of the public unfamiliar with the first family's holiday history, Democrats are dismissing concerns that self-proclaimed "Scranton Joe" will seem out of touch with the working-class voters he is trying to persuade to cast ballots for Democrats next year.

BIDEN AT 79: QUESTIONS OF AGE AND 2024 RENEWED AS PRESIDENT CELEBRATES BIRTHDAY

"Reagan was always disparaged for spending Thanksgiving at the ranch in California, but Biden’s tone-deafness is alarming," Shirley said. "Yes, presidents have often been criticized for where they spent Thanksgiving, but Biden’s choice is especially egregious."

The Republican strategist added, "Going to Nantucket is ill-advised for presidents at 36% approval and falling."

An average of two-fifths of respondents told pollsters they approve of Biden's job as president, while a majority disapprove, according to RealClearPolitics .

A Fox News poll found last week that less than a quarter of registered voters feel positive about the economy compared to a third in December 2020 at the end of former President Donald Trump's administration. More than a quarter named the economy as their most pressing issue before coronavirus and inflation-supply chain problems, the poll found. And higher grocery prices are creating "serious" hardship for a third of respondents, an increase from 28% in August.

But barring "some particularly offensive optic or comment" in Nantucket, fellow historian David Pietrusza predicted there would not be too much political pushback.

"Let's face it: Presidents don't stay at Motel 6," Pietrusza told the Washington Examiner . "Even when Franklin Roosevelt followed up his 1932 election in the heart of the Great Depression and went off sailing on his multi-millionaire buddy Vincent Astor's immense yacht, the 264-foot Nourmahal , there was little significant downside."

"True, the opposition may carp, but then the conversation returns to larger ongoing issues," he said.

Trump spent most of his presidential Thanksgivings at Mar-a-Lago, his luxury private resort in Palm Beach, Florida, except for 2019 when he surprised U.S. troops stationed in Afghanistan. Former President Barack Obama tended to celebrate at the White House, dropping into a Washington, D.C., soup kitchen during the day. He would then travel to Hawaii, one of his childhood homes, for Christmas after vacationing in Martha's Vineyard, Massachusetts, in the summer.

Massachusetts's splashy Cape Cod and nearby islands have been a presidential playground since John F. Kennedy put Hyannisport on the map. His father first rented a holiday cottage in 1926, purchasing what would become the Kennedy Compound two years later. Former President Bill Clinton vacationed on Martha's Vineyard as an incumbent, but Obama became the first ex-commander in chief to buy a place on the island. The Obamas doled out $11.75 million for Boston Celtics owner Wycliffe Grousbeck's 6,892-square-foot Edgartown Great Pond property in 2019.

Biden has spent every Thanksgiving on Nantucket since 1975, minus 2015, the year his son Beau died from brain cancer, and 2020 because of the pandemic. The first couple took their inaugural trip to the island shortly after they started dating following the 1972 death of the president's first wife and infant daughter. The then-Delaware senator's chief of staff recommended the destination as a compromise instead of rejecting multiple invitations, despite his boss's pride in being "one of the poorest men in Congress" raised in Scranton, Pennsylvania. Last month, Nantucket's median listed house price was $3 million.

The Nantucket escape was preceded by a Friendsgiving dinner Monday with service members and military families at Fort Bragg, North Carolina. Joe and Jill Biden will also join Vice President Kamala Harris and second gentlemen Doug Emhoff for a community service project Tuesday before they fly out.

The White House has remained mum about the rest of the president's Thanksgiving itinerary, but local flight restrictions and extra airport security and screening precautions will be in effect until Sunday. He has attended the Main Street Christmas tree lighting and mass at St. Mary, Our Lady of the Isle Catholic Church on previous visits.

Biden has been pitching his $1.2 trillion bipartisan infrastructure deal and roughly $2 trillion partisan social welfare and climate spending bill as "a blue-collar blueprint to rebuild America."

It just makes you wonder what that small percentage of Americans who approve of this administration see that causes them to be so blind. Oh, they probably only watch CNN or MSNBC and aren't smart enough to realize they are being lied to on a grand scale.

Who "ACTUALLY" cares where dementia Joe and his Dr jillie spend Thanksgiving??? I don't. Maybe lil joey should stay away from OUR White House FOREVER.

He goes away to Nantucket for Thanksgiving while there are thousands who will lose their job in Healthcare because of this mandate. He doesn’t care for the American people and neither does all the people who voted and agree with his actions. Please remind me we are still living in America land of the free. It does not feel as though it feels more like the beginning of communism/socialism our rights are being taken away.

President Joe Biden is having trouble hiding his frustration with reporters as pressure mounts on him at home over his stalled legislative agenda and abroad due to escalating Russia-NATO tensions over Ukraine.
PRESIDENTIAL ELECTION・21 HOURS AGO
WashingtonExaminer

Following a report that Supreme Court Justice Stephen Breyer will retire at the end of the court’s term, Democrats and liberal activists were quick to remind President Joe Biden of his campaign pledge to nominate a black woman to the high court for the first time in the nation’s history.
PRESIDENTIAL ELECTION・13 HOURS AGO
WashingtonExaminer

President Joe Biden's vow to overhaul the asylum process remains unfulfilled as he enters his second year — as does his promise to deal with the factors in Central America that have prompted millions in recent years to flee for the United States.
PRESIDENTIAL ELECTION・21 HOURS AGO
Business Insider

"If all Democrats hang together ... they have the power to replace Justice Breyer in 2022 without one Republican vote in support," Graham said.
CONGRESS & COURTS・13 HOURS AGO

Unpacking some of the wildest theories of what the Biden White House may do with the looming Supreme Court vacancy. What happened: This happens almost every time there's a vacancy atop the nation's highest court, but let's walk through why some of the wildest ideas about the Supreme Court vacancy almost without a doubt won't happen.
CONGRESS & COURTS・12 HOURS AGO
Newsweek

The survey found 46 percent of voters would support a generic Republican candidate compared with 37 percent who would back Biden for a second term.
PRESIDENTIAL ELECTION・17 HOURS AGO
Newsweek

Harris vacating the vice president's office would deny Democrats a majority in the Senate and set off another confirmation fight for her replacement.
PRESIDENTIAL ELECTION・14 HOURS AGO

"If you're unhappy with your vice president and you want her in a different role, there is no greater role than on the Supreme Court," McEnany said on Fox News.
CONGRESS & COURTS・13 HOURS AGO
The Independent

Supreme Court Justice Stephen Breyer’s impending retirement gives PresidentJoe Biden one of the most prized opportunities any president has: a chance to nominate a Supreme Court justice who will likely serve long after he has left the White House.But given that Democrats have only a 50-seat majority with Vice President Kamala Harris as the tiebreaker, many of them are probably already dreading how conservative Democratic Sens Joe Manchin of West Virginia and Kyrsten Sinema of Arizona would vote.Democrats especially can’t be too optimistic after Mr Manchin effectively killed Mr Biden’s proposed Build Back Better bill, while Ms Sinema opposed...
PRESIDENTIAL ELECTION・10 HOURS AGO
Newsweek

Eyes will be on the two moderate Democrats, who have opposed some of Biden's key legislative priorities and will be needed to confirm his Supreme Court nominee.
PRESIDENTIAL ELECTION・13 HOURS AGO
Business Insider

"Nearly 10 million children will be thrown back into or deeper into poverty this winter" if the child tax credit isn't renewed, the letter says.
PRESIDENTIAL ELECTION・22 HOURS AGO

When President Joe Biden announced a slate of judicial nominations on 29 March last year, one nomination to the US Court of Appeals for the District of Columbia stood out to veteran court-watchers. Mr Biden’s pick for the seat once held by current US Attorney General Merrick Garland was US District Judge Ketanji Brown Jackson, a Florida native and double Harvard graduate (undergraduate and law school) who had been named to the federal bench by then-president Barack Obama in 2013. The choice of Ms Jackson for the vacancy created by Mr Garland’s move to the Justice Department would make...
PRESIDENTIAL ELECTION・11 HOURS AGO
The Guardian

President urged to make good on promise to pick Black woman to fill vacancy, with Stephen Breyer to retire as justice – follow the latest
PRESIDENTIAL ELECTION・8 HOURS AGO
Newsweek

As a candidate for the presidency, Joe Biden vowed to put a Black woman on the Supreme Court. Many pundits predict he'll choose Judge Jackson.
PRESIDENTIAL ELECTION・11 HOURS AGO
Newsweek

Banks also tweeted a video of the exchange between President Joe Biden and Fox News' Peter Doocy with the caption "Congrats" and tagged Doocy.
PRESIDENTIAL ELECTION・1 DAY AGO

"This November is about one thing: It's impeaching Joe Biden to stop this madness and to stop this illegitimate regime from destroying our nation," said Bannon.
PRESIDENTIAL ELECTION・2 DAYS AGO
Business Insider

In past years, news anchors, reporters, commentators, and late-night hosts have unabashedly gushed over Republican senators who’ve broken ranks with their party, hailing them as "mavericks" and "heroes" for casting politics aside and voting with their "conscience." However, when Democrats like Kyrsten Sinema, D-Ariz., and Joe Manchin, D-W.Va., buck...
PRESIDENTIAL ELECTION・1 DAY AGO