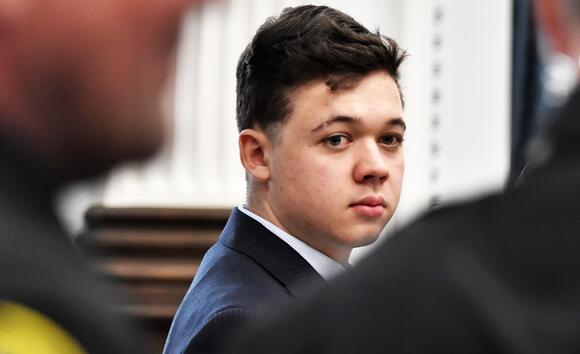 Republicans are lionizing Kyle Rittenhouse as they move to capitalize on the 18-year-old’s newfound celebrity on the Right to score points with the conservative base in their campaigns.

After Rittenhouse was acquitted in a Wisconsin courtroom of murder and other felony charges stemming from his involvement in the Kenosha riots, prominent Republicans cheered, and he even sat for an interview with Fox News’s Tucker Carlson. Statements of support poured in from former President Donald Trump, Florida Gov. Ron DeSantis, and Republicans running in competitive congressional primaries, including Senate candidates Blake Masters in Arizona and Jane Timken in Ohio.

Republican Mark McCloskey traveled to Kenosha for the trial, hoping to convert his support for Rittenhouse into a boost in his Missouri Senate prospects.

Meanwhile, in Texas, underdog Republican Don Huffines, waging an uphill battle to unseat Gov. Greg Abbott in a March 1, primary, was thick with praise for Rittenhouse, saying he “acted bravely to defend himself and his community,” adding “Kyle’s courage and resilience inspire us all.”

In August 2020, Rittenhouse, then 17 and living in Illinois, went to Kenosha, where he worked and his father lived, amid civil unrest stemming from the shooting of Jacob Blake, a black man, by a white police officer. In confrontations with multiple individuals on the streets of Kenosha during the riot, Rittenhouse fired his weapon, killing two people. A jury ruled that he acted in self-defense.

Republican strategists say Rittenhouse has captured the imagination of high-profile GOP political figures and the party’s 2022 candidates because the issues surrounding his trial hit conservative sweet spots in the culture clash-driven politics of the Trump era.

For grassroots Republicans, the Rittenhouse verdict bolstered Second Amendment rights, represented a victory for the rule of law over an unfair prosecution propelled by a leftist witch hunt, and repudiated a liberal media that they believe branded the accused guilty from the get-go — and as a white supremacist to boot, despite the lack of evidence that he was motivated by racism.

President Joe Biden responded to the verdict with calls to respect the jury’s decision, saying the American system of justice should be respected. But Biden reflected the dismay of many Democrats who believed both that Rittenhouse was guilty of murder and that he inserted himself into the Kenosha riots because of racial animus toward black people.

In comments to reporters, Biden said, “I stand by what the jury has concluded … the jury system works, and we have to abide by it.”

But in a prepared statement issued later, the president acknowledged that the Rittenhouse acquittal left “many Americans feeling angry and concerned, myself included.” His was among the more mild expressions of disappointment expressed on the Left.

Although many Republicans have latched on to Rittenhouse in their latest effort to make common cause with the GOP base and outflank primary opponents, some have been more measured than others. Where some Republican contenders have lauded Rittenhouse personally, others have devoted more attention to the legal implications of the outcome of his trial.

“The Rittenhouse verdict affirms that the right to self-defense and our 2nd Amendment rights are paramount and cannot be taken away,” Timken said. “This case also demonstrates the need to back the blue and protect law and order,” she added.

“Democrat leaders' decisions to cede our cities to criminals and rioters in Kenosha and across the country created a lawless vacuum that went against the very principles of our nation and must never happen again.”

The day democrats use people’s deaths and glorify violence to rally votes is the day I will no longer be a democrat. Period. Every democratic politician condemned the violence during the summer of protests. They backed the peaceful protesters which was 90% of them and condemned the violence and looting. Every. Single. One. Of. Them. Astounding that republicans have sunk this low.

The top Republican on the banking committee has written to President Joe Biden questioning the geographic and industrial diversity of his Federal Reserve picks, raising the specter of legal problems that could threaten the nominations.
WASHINGTON, DC・22 HOURS AGO
WashingtonExaminer

"Fraud is fraud, no matter who commits it or what party they prefer,” said Chris Hartline, a spokesperson for the NRSC.
TALLAHASSEE, FL・1 DAY AGO

"If all Democrats hang together ... they have the power to replace Justice Breyer in 2022 without one Republican vote in support," Graham said.
CONGRESS & COURTS・51 MINUTES AGO
The Independent

One of the Republican Party’s most controversial top-tier Senate candidates has reported spectacular fundraising returns, further raising his profile even as some worry he could hurt the party’s chances of retaking the upper chamber.Herschel Walker, who is challenging freshman Georgia Senator Raphael Warnock, pulled in some $5.4m in donations over the last quarter of 2021, a sum that vaults him to the very top ranking of Senate fundraisers this cycle.A former NFL player, Mr Walker was endorsed by Donald Trump last October, and since then has attracted the support of many other top Republicans, including Mitch McConnell and other...
PRESIDENTIAL ELECTION・2 HOURS AGO

WASHINGTON, Jan 25 (Reuters) - U.S. Senate Republican Leader Mitch McConnell, a frequent critic of President Joe Biden, said on Tuesday that he is seeing "encouraging" signs from the administration about its approach to deterring further Russian aggression towards Ukraine. McConnell said Biden now appears to be adopting the right...
FOREIGN POLICY・1 DAY AGO
Newsweek

On Sunday the GOP lawmaker was asked about a proposed plan shared in the Trump White House to seize voting machines after the 2020 election.
CONGRESS & COURTS・2 DAYS AGO
MSNBC

Elijah Behnke, a Republican state representative in Wisconsin, apparently did not know he was being recorded last week when he chatted with a group of voters at the state Capitol. The group appeared to be made up pro-Trump Wisconsin activists, which apparently led the GOP legislator to be candid in his comments.
WISCONSIN STATE・2 DAYS AGO
Reuters

WASHINGTON, Jan 24 (Reuters) - The U.S. Supreme Court on Monday declined to hear a challenge by Republican lawmakers to pandemic-related proxy voting rules set by Speaker Nancy Pelosi in the Democratic-led House of Representatives that were tailored to limit exposure to COVID-19. The voting rules, implemented in May 2020, allow members of the 435-seat House to serve as proxies for colleagues in quarantine or otherwise unable to cast floor votes in the chamber. House Republican leader Kevin McCarthy and other lawmakers had asked the Supreme Court to reverse a lower court decision that allowed the remote voting rules to remain in effect.
CONGRESS & COURTS・2 DAYS AGO

Liz Cheney among those to condemn remarks by former House speaker as committee member Zoe Lofgren says: ‘I think Newt has really lost it’
CONGRESS & COURTS・2 DAYS AGO
WRBL News 3

Republicans and progressive Democrats alike say they are feeling better about their chances in Texas’s 28th Congressional District as nine-term incumbent Rep. Henry Cuellar (D) grapples with the fallout of an FBI raid on his home last week.
CONGRESS & COURTS・5 HOURS AGO
POLITICO

“I get along great with Ron,” Trump said.
POTUS・1 DAY AGO
Reuters

Trump Calls Himself 45th and 47th President, Playing Into Potential for 2024 Campaign

A video posted on social media showed Trump calling himself the "45th and 47th" president during a golf outing.
PRESIDENTIAL ELECTION・4 HOURS AGO
The Independent

Sen Bernie Sanders appeared eager to escalate the war between various factions of the Democratic Party on Sunday during an interview with CNN in which he stated his support for the censure and potential primarying of a senator who voted against the party’s effort to change the filibuster and pass voting rights legislation.Mr Sanders appeared on CNN’s State of the Union and said that the Arizona Democratic Party was “exactly right” to censure their state senator after Ms Sinema voted with Republicans last week against the Democrats’ voting rights push.“On that particular vote that she and [Sen Joe] Manchin...
CONGRESS & COURTS・2 DAYS AGO
Newsweek

The survey found 46 percent of voters would support a generic Republican candidate compared with 37 percent who would back Biden for a second term.
PRESIDENTIAL ELECTION・4 HOURS AGO
Salon

Over the long weekend, Gallup released a poll that sent a shock wave through Democratic circles: There's been a 14 point swing in party preference from Democratic to Republican in the past year. While 49% of Americans leaned Democratic and 40% leaned Republican in January 2021, at the beginning of 2022, the parties have nearly reversed positions. Now 47% of Americans prefer Republicans while a mere 42% prefer Democrats.
PROTESTS・8 DAYS AGO