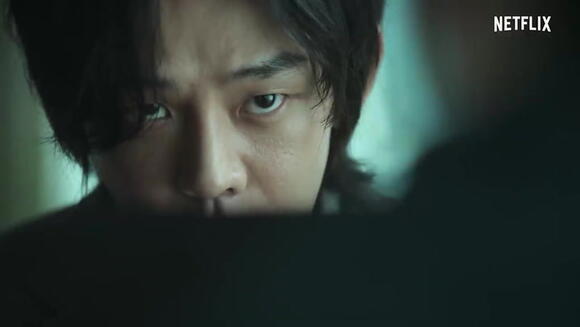 The new South Korean series follows the story of unearthly beings who deliver condemnations, sending individuals to hell and giving rise to a religious group founded on the idea of divine justice.

According to data by analytics company FlixPatrol, Hellbound was the most popular series on Netflix on 20 November, surpassing Squid Game in more than 80 countries within 24 hours of the show’s release.

Hellbound is directed by Train to Busan’s Yeon Sang-ho. It premiered at the 2021 Toronto international film festival in September.

Earlier this year, other K-Dramas such as the romantic-comedy series Hometown Cha-Cha-Cha and thriller show My Name also ranked highly on the charts.

Squid Game , on the other hand, spent 46 non-consecutive days in the top spot after its release on 17 September, becoming Netflix’s most-watched original series of all time.

On 12 October, Netflix announced that Squid Game broke all records after 111 million people tuned into the dystopian drama.

The show surpassed the British romance series Bridgerton , which previously set the record after being watched 82 million times in its first 28 days.

Squid Game was also on Netflix’s top 10 list in approximately 94 countries and is the platform’s first-ever Korean series to reach the No 1 spot in the US.

The series explores a dystopian reality, in which a mysterious organisation recruits people in debt to compete in a series of deadly childhood games for the chance to win a life-changing amount of money.

Hellbound is available to stream on Netflix now.

High school is never easy, but it’s a lot harder when your school is teeming with swarms of the undead. In the first trailer Netflix’s upcoming action-horror series All of Us Are Dead, students in a Korean high school have to keep themselves alive while hundreds of their classmates — and maybe the rest of the world — turn into zombies. All of Us Are Dead’s first season will be released on Netflix on Jan. 28.
TV & VIDEOS・13 DAYS AGO
The Independent

Netflix’s smash hit Squid Game has become the first foreign-language TV series to be nominated for a Screen Actors Guild (SAG) award. Hwang Dong-hyuk’s dystopian show will compete against shows such as Succession, The Morning Show, and The Handmaid’s Tale for the 2022 award for best drama ensemble. Tick Tick...BOOM! actor Vanessa Hudgens and Dopesick star Rosario Dawson announced the full list of nominees in an Instagram Live on Wednesday (12 January). Squid Game actors Lee Jung-jae and Jung Ho-yeon are also in the running for best male and female actor in a drama series, respectively. With a...
TV SERIES・14 DAYS AGO
knightcrier.org

The rebirth of an iconic karate rivalry; Cobra Kai. Almost everyone knows and loves the timeless story of The Karate Kid. Fast forward twenty-seven years and the beloved Daniel LaRusso has a brand new life but is still facing the everlasting feud with Cobra Kai. The Netflix show, Cobra Kai,...
TV SERIES・13 DAYS AGO
Sea Coast Echo

Squid Game is getting a second series

‘Squid Game’ has been renewed for a second season. The South Korean dystopian drama - which became streaming platform Netflix's most popular series on launch after reaching 214 million households in 2021 - has been greenlit for another installment following its huge global success. Ted Sarandos, Netflix's co-CEO and...
TV SERIES・6 DAYS AGO

That's up from 15 in 2021. In fact, last year, Netflix invested more than half a billion for Korean content. Squid Game's monster success was followed by Korean hits like Hellbound and The Silent Sea.
TV SHOWS・8 DAYS AGO
/Film

The Most-Streamed Series Of 2021 Wasn't Squid Game, Believe It Or Not

It's harder than ever to tell which movies and TV shows are truly the most popular in the era of streaming. Netflix was already shady about the way it measured its viewership (counting a "view" as a subscriber having watched at least two minutes of a film or series) before it shifted to its current system of reporting the total amount of hours its subscribers spent watching a specific title, which is suspect for reasons we will get into shortly. Meanwhile, platforms like HBO Max and Disney+ are even less forthcoming when it comes to their viewership, typically leaving it to third-parties like Nielsen to provide reliable information about streaming.
TV SERIES・6 DAYS AGO
mxdwn.com

Variety reports that Seobok, a recent South Korean sci-film with Squid Game star Gong Yoo will launch in North America next month via streaming platform Rakuten Viki. Seobok is licensed by distributor WellGo USA. The film will be available exclusively through Rakuten Viki’s TVOD for $2.99. Rakuten Viki owns exclusive rights for the movie for just two weeks in the US. and Canada. Its window of exclusivity goes from February 1 to February 15, but the movie will be available for a full 60 days on TVOD.
MOVIES・7 DAYS AGO

Netflix (NFLX) - Get Netflix, Inc. Report is leaning into the success of Squid Game by unveiling a slate of new shows from South Korea set to debut in 2022. Netflix is developing a high school zombie show called "All of Us Are Dead; Money Heist: Korea - Joint Economic Area, an adaption of a popular Spanish series; and Seoul Vibe, an action film placed against the backdrop of the 1968 Seoul Olympic Games.
TV & VIDEOS・7 DAYS AGO
The Hollywood Reporter

There were no elves, dwarfs or hobbits shown — not even a few crumbs of lembas bread. And yet, Amazon’s teaser video Jan. 19 revealing the mere title of its upcoming The Lord of the Rings TV series managed to rack up an estimated social reach of 1 billion impressions and trended in markets worldwide on Twitter and YouTube, the studio claims. “To already see this much enthusiasm for the series is incredible and gets us even more excited for what we’ll be sharing with fans in the near future,” says Ukonwa Ojo, global CMO of Prime Video and Amazon Studios. The show’s...
TV SERIES・1 DAY AGO
Deadline

EXCLUSIVE: Musician and filmmaker Flying Lotus has set the sci-fi horror film Ash as his second feature, on the heels of his body horror anthology Kuso, which made its world premiere at the 2017 Sundance Film Festival. The new film, for which the multi-hyphenate will also compose an original score, watches as a woman wakes up on a distant planet and finds the crew of her space station viciously killed, her investigation into what happened setting in motion a terrifying chain of events. Jonni Remmler penned the original screenplay. XYZ Films and GFC Films will produce, with Echo Lake on board as exec...
MOVIES・1 DAY AGO
Deadline

Netflix has given a series order to The Diplomat, a political thriller drama created by Debora Cahn (Homeland, The West Wing). Cahn will serve as executive producer and showrunner under a multi-year overall deal with the streamer for series and other projects. In The Diplomat, whose order is for eight 50-minute episodes, in the midst of an international crisis, a career diplomat lands in a high-profile job she’s unsuited for, with tectonic implications for her marriage and her political future. Janice Williams also executive produces the series, which is slated to film in the UK. At Netflix, Cahn is reuniting with the...
TV SERIES・1 DAY AGO
Hypebae

Netflix confirmed a while back that Squid Game Season 2 is in the works. Adding to the announcement, Ted Sarandos, Netflix’s co-CEO and chief content officer, made a particular comment on the franchise that is worthy of notice. Sarandos said to Variety: “The Squid Game universe has just begun.”
TV SERIES・3 DAYS AGO
Variety

‘Call My Agent!’ Producers Discuss Movie Plans and What’s Next for The Hit French Show (EXCLUSIVE)

With a number of remakes and a movie in the pipeline, “Call My Agent!,” the International Emmy Award-winning series set at a Parisian talent agency, has become one of the most powerful television shows to emerge from France. The series’ producers, Mediawan-owned Mon Voisin Productions and Mother Production, are co-producing the highly anticipated U.K. remake with Headline Pictures and Bron Studios (“Joker”) for Amazon Prime Video and Sundance Now. The producers are also in the process of developing a 90-minute film with Nicolas Mercier, one of the two showrunners behind “Call My Agent!” (Mercier took over as showrunner from Fanny Herrero.) “It will open...
TV SERIES・2 DAYS AGO
Deadline

“The Squid Game universe has just begun.” Those are the words of Netflix co-CEO Ted Sarandos, who confirmed during Netflix’s fourth-quarter earnings call Thursday that there will “absolutely” be a second season of the surprise smash-hit Korean drama. Creator Hwang Dong-hyuk has talked about making a second season of the dystopian drama since it became Netflix’s most-watched series ever, and has even teased a third season. However, Sarandos’ comments today mark the first time any of the streamer’s senior execs have confirmed the renewal. Hwang created, wrote, directed and exec produced the nine-part series, which has reached more than 142 million Netflix households...
TV SERIES・7 DAYS AGO
The Hollywood Reporter

Netflix’s ‘The Woman in the House Across the Street From the Girl in the Window’: TV Review

The recent run of small-screen mystery spoofs is, itself, slightly mysterious given that few genres have a more precarious bar to measure success. Comedy is, of course, subjective and precarious all on its own, but when it comes to long-form mystery, a bad solution or resolution is an uncomfortably easy way to undo even the most adored of build-ups. Hulu’s Only Murders in the Building was a treat because of how successful it was with both genre elements, delivering laughs and, ultimately, a whodunit that kept viewers guessing. Apple TV+’s upcoming The Afterparty doesn’t succeed quite as well with its unfolding puzzle,...
TV SERIES・1 DAY AGO
NME

Netflix’s hit K-drama series Squid Game has become the first-ever Korean series to receive nominations at the Screen Actors Guild (SAG) Awards. Earlier today (January 13), the awards show had unveiled its final list of nominations ahead of the 28th edition of its annual awards ceremony, which is scheduled to take place on February 27, per Yonhap News Agency.
TV & VIDEOS・14 DAYS AGO
Insider

Japan's ghost town problem, the bleak reality of 'Squid Game,' and how Vietnam destroyed its last paradise: our most popular stories from Asia

Insider launched its first Asia bureau one year ago. Here are 16 of the most popular stories from our team over the last year.
CHINA・14 DAYS AGO