Chelsea vs Juventus live stream: How to watch Champions League fixture online and on TV tonight 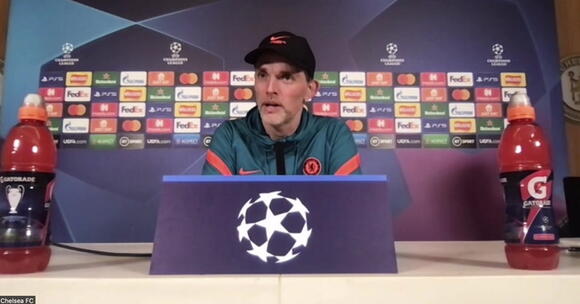 Chelsea are on the brink of qualifying for the Champions League knockout rounds as they welcome Juventus to Stamford Bridge this evening.

Chelsea enter the fixture in second place in Group H, with leaders Juventus having already secured their spot in the round of 16 – though the Blues still have a chance to go through in first place.

A draw tonight would be enough for Chelsea to advance, though the defending champions can also progress with a loss if Zenit St Petersburg fail to beat Malmo.

Thomas Tuchel’s side were 3-0 winners at Leicester on Saturday as they remained top of the Premier League, three points clear of Manchester City, so they will be high on confidence heading into this clash.

Here’s everything you need to know about this evening’s game.

The match will kick off at 8pm GMT at Stamford Bridge.

The game will air live on BT Sport 2 and BT Sport Ultimate. The fixture will also stream live on the broadcaster’s app and website.

Chelsea forwards Romelu Lukaku and Timo Werner are closing in on returns from injury. The latter sat on the bench for the Blues’ victory over Leicester on Saturday, while Lukaku is back in training. Meanwhile, Mateo Kovacic is out for the foreseeable future due to a hamstring issue.

Paulo Dybala may be fit enough to feature for Juventus, though Giorgio Chiellini is unlikely to be involved. Danilo and Aaron Ramsey will miss out here, while Federico Bernardeschi is also an injury concern for coach Max Allegri.

Juventus are without a win in their last three games, while Chelsea have been in fine enough form to expect to come out on top here. Chelsea 1-0 Juventus .

The title race is over now, apparently. You know, the one that ended a few weeks ago. Manchester City already looked like being crowned champions for a fourth time in five years before this twelfth consecutive league win. After it, it seems a nailed-on certainty. There is a faint and remote possibility of a challenge from Liverpool, now 14 points back but with two games in hand. This was a meeting of the top two, though, and it only reinforced the theory that there is in fact only a top one.That was demonstrated not so much by the result, a...
PREMIER LEAGUE・1 DAY AGO
The Independent

Manchester City boss Pep Guardiola believes he has become a better manager from watching his Chelsea counterpart Thomas TuchelHaving won 31 trophies in his glittering career, former Barcelona and Bayern Munich boss Guardiola is one of the preeminent managers of his generation but Tuchel famously got the better of him in last season’s Champions League final.Guardiola, 50, feels he can learn much from studying the way the 48-year-old German operates.The Spaniard said: “He is so creative, one of the few managers I learn from to become a better manager myself. He is excellent in all departments.“Since he was at Mainz,...
PREMIER LEAGUE・2 DAYS AGO
The Independent

Manchester City increased their lead at the top of the Premier League table to 13 points as Kevin De Bruyne’s strike earned the defending champions a 1-0 win over second-placed Chelsea. City dominated possession in the first half but Jack Grealish was denied an opening goal when Kepa Arrizabalaga blocked his shot with an outstretched leg. Romelu Lukaku went close after the break but saw a curling effort saved by Ederson. The hosts took the lead in the 70th minute when De Bruyne curled in an excellent strike past Kepa from outside of the box, Chelsea continued to struggle to...
PREMIER LEAGUE・1 DAY AGO
San Diego Union-Tribune

Manchester City have gone 13 points clear in the Premier League as they defeated Chelsea 1-0 thanks to a superb Kevin De Bruyne strike.It was a game regarded as one Chelsea had to win as City are unlikely to drop many points for the rest of the season. But the Blues weren’t clinical enough in the final third.In the first half, Raheem Sterling was causing a lot of issues but Chelsea’s defence, particularly through Antonio Rudiger and Thiago Silva, held strong.Chelsea had dangerous counter attack but the final pass didn’t come off for the visitors angering manager Thomas Tuchel. The...
PREMIER LEAGUE・1 DAY AGO

Brighton boss Graham Potter is hopeful Tariq Lamptey will be fit to face former club Chelsea after suffering an injury setback ahead of the 1-1 draw with Crystal Palace.Seagulls defender Lamptey was a surprise omission from Albion’s starting XI for Friday evening’s clash with the Eagles due to a slight groin issue.The England Under-21 international managed a lively second-half cameo as a late Joachim Andersen own goal prevented Palace snatching victory courtesy of Conor Gallagher’s seventh strike of the season.Wing-back Lamptey, who has been in red-hot form, only returned to Premier League action in October following a 10-month absence due...
PREMIER LEAGUE・1 DAY AGO
The Independent

Ralf Rangnick has no plans to replace Harry Maguire as Manchester United captain, despite Cristiano Ronaldo’s claim that the squad's mentality must improve to avoid a "nightmare" season.In an interview with television broadcasters this week, Ronaldo said that there needed to be a shift in attitude within the Old Trafford dressing room in order for results to improve.The five-time Ballon d'Or winner rejoined United from Juventus in August, having won eight major honours during his first spell at the club between 2003 and 2009, including three Premier League titles and the Champions League.Ronaldo has returned as the oldest outfield player...
PREMIER LEAGUE・2 DAYS AGO
The Independent

Ralf Rangnick would prefer to keep both Dean Henderson and Donny van de Beek at Manchester United beyond the end of the January transfer window, despite their desire for regular first-team football.Neither Van de Beek or Henderson have started a Premier League game for United this season, having been left on the sidelines by former manager Ole Gunnar Solskjaer and his interim successor Rangnick.The pair have made their feelings known to the United manager but have so far failed to secure a move away from Old Trafford, with Rangnick reluctant to let either go.Rangnick is having to contend with a...
PREMIER LEAGUE・2 DAYS AGO
The Independent

Antonio Conte has said the people at Tottenham Hotspur “deserve much more” as the Italian tries to take the club back to the top tier of English football.Conte has inherited a tough task at Spurs, who are no longer challenging for the top honours after several years of decline.The Italian has spoken at length about the “important gap” the club has to bridge with the likes of Manchester City, Liverpool Chelsea and Manchester United and how his side are currently “in the middle”.He has looked forlorn in recent weeks as he saw his side lose a Carabao Cup semi-final...
PREMIER LEAGUE・2 DAYS AGO
San Diego Union-Tribune

Erling Haaland has scored twice to propel Borussia Dortmund to a 5-1 win over Freiburg and close the gap to Bundesliga leader Bayern Munich to three points
SOCCER・2 DAYS AGO
90min.com

Manchester United travel to face Aston Villa in the Premier League on Saturday evening, having just knocked Steven Gerrard's men out of the FA Cup. That 1-0 victory wasn't awe-inspiring, but the it did show character to bounce back from a gut-wrenching defeat at home to Wolves in their prior outing - a result that proved to Ralf Rangnick just how big a rebuilding job he has on his hands.
PREMIER LEAGUE・2 DAYS AGO
The Independent

Arsenal have submitted a formal request to the Premier League asking to postpone their north London derby fixture against Tottenham on Sunday. Mikel Arteta’s side are suffering from several absences due to a Covid outbreak, injuries and players being away on international duty at the Africa Cup of Nations. The Premier League confirmed the request had been lodged in a statement released on Friday evening and said they will take a final decision on Saturday.“The Premier League has received a postponement request from Arsenal FC relating to their away match against Tottenham Hotspur, due to be played at 4.30pm...
PREMIER LEAGUE・2 DAYS AGO