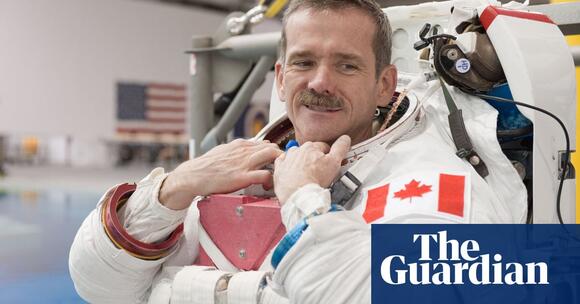 Chris Hadfield was the first Canadian to walk in space, became commander of the International Space Station, and became a viral sensation after covering Bowie like no one else. He speaks to the Guardian’s science editor, Ian Sample, about life as an astronaut, the new race to the moon and his new novel, The Apollo Murders.

Target Venus not Mars for first crewed mission to another planet, experts say

Despite its ‘hellish’ environment, scientists argue there are good reasons to focus on ‘Earth’s sister’
ASTRONOMY・2 DAYS AGO
The Guardian

A man has faced court over the death of the former surfing champion Chris Davidson who died after being punched outside a pub on the New South Wales mid-north coast. Police said they were called to Sportsmans Way at South West Rocks just after 11pm on Saturday following reports a man had been punched in the face, fallen and hit his head on the pavement.
SPORTS・2 DAYS AGO
OK! Magazine

Meghan Markle Was Fuming About Not 'Getting Paid' For Royal Tour, 'Failed To Understand The Point' Of Public Outings: Book

Talk about a not-so-pretty penny. Meghan Markle was apparently left less than thrilled about the reality of her role as the Duchess of Sussex after marrying into the royal family in 2018. In a new bombshell book titled "Courtiers: The Hidden Power Behind the Crown," author Valentine Low claims the...
CELEBRITIES・1 DAY AGO

It may never be possible to determine definitively whether Monday’s underwater explosions at the two Nord Stream gas pipelines were the work of Russian sabotage, but it is certainly the way to bet. The incidents took place close to – but just outside – the 12-mile territorial waters of...
ECONOMY・18 HOURS AGO
The Guardian

Swedish seismologists says blasts detected near gas pipelines, which are leaking into Baltic sea
POLITICS・21 HOURS AGO
The Guardian

The renowned US big-mountain skier Hilaree Nelson has gone missing on a trek in the Himalayas after apparently falling into a 2,000ft crevasse. Nelson and her partner, Jim Morrison, had scaled the 26,781ft peak of Manaslu mountain on Monday morning. Jiban Ghimire of Shangri-La Nepal Treks, which organised the expedition, told Outside Magazine that the pair reached the summit at 11:30am local time.
PUBLIC SAFETY・20 HOURS AGO
The Guardian

Denver Riggleman tells 60 Minutes that texts from Mark Meadows amounted to a ‘roadmap to an attempted coup’
U.S. POLITICS・1 DAY AGO
The Guardian

A Russian draft officer has been shot by a man angry at his friend’s conscription and another man has set himself on fire in a protest as opposition to Vladimir Putin’s announcement of a mobilisation for the war in Ukraine grows. Protests also continued for a third day...
PUBLIC SAFETY・2 DAYS AGO
The Guardian

Host speaks at funeral of Ralph ‘Sonny’ Barger, leader of the group considered by the DoJ to be linked to organised crime
POLITICS・1 DAY AGO

Basketball’s world governing body has opened an investigation after players on the Mali women’s team were filmed physically fighting one another following their World Cup loss to Serbia in Sydney. The scuffle between Salimatou Kourouma and Kamite Elisabeth Dabou broke out during a post-match interview with Serbia’s Sasa...
WORLD・1 DAY AGO
The Guardian

‘A way to get rid of us’: Crimean Tatars decry Russia’s mobilisation

Rights activists in Crimea say Russia’s mobilisation drive in the occupied peninsula is disproportionately targeting Crimean Tatars, an ethnic group that has largely opposed Russian rule since the area was annexed in 2014. “Everywhere, in every town, I am hearing that the majority of those mobilised are Crimean Tatars,...
PROTESTS・2 DAYS AGO
The Guardian

No one in physics dares say so, but the race to invent new particles is pointless | Sabine Hossenfelder

In private, many physicists admit they do not believe the particles they are paid to search for exist, says physicist Sabine Hossenfelder
PHYSICS・2 DAYS AGO
The Guardian

Tucci is a smug prisoner; David Tennant is a sweet vicar with a secret. Their tales come together confidently in this funny and typically meaty mystery from Steven Moffat
MOVIES・1 DAY AGO
The Guardian

Russia-Ukraine war latest: what we know on day 215 of the invasion

A Russian man has shot the leader of the local military draft committee in a Siberian town; protests against Kremlin’s military call-up continue
MILITARY・1 DAY AGO
The Guardian

The Republican congressmen Louis Gohmert and Paul Gosar adopted such extreme, conspiracy-tinged positions, even before the US Capitol attack, that a fellow member of the rightwing Freedom Caucus thought they “may have had serious cognitive issues”. Denver Riggleman, once a US representative from Virginia, reports his impression of...
ARIZONA STATE・1 DAY AGO
The Guardian

Alexandra, 37, a lawyer from Moscow, appeared to almost astonish herself as she said it. Perhaps it was the first time she had, out loud. “We have left our house, our car, our lives – everything.”. Looking down at the top of the blond head of her small...
POLITICS・22 HOURS AGO