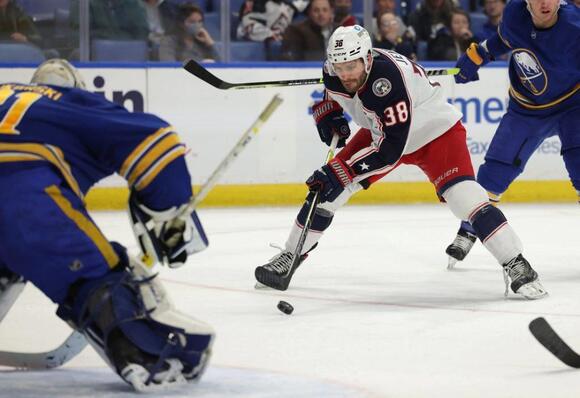 Jack Roslovic had two goals and an assist, and the visiting Columbus Blue Jackets defeated the Buffalo Sabres 7-4 on Monday night.

Vladislav Gavrikov scored twice and Max Domi had a goal and two assists for the Blue Jackets, who have won three of four. Joonas Korpisalo made 29 saves.

Tage Thompson scored twice for the Sabres in their third straight loss. Dustin Tokarski allowed four goals in 12 shots before Aaron came on early in the second period and stopped 14 of 15 shots.
Thompson got a pass from in front of the net from Victor Oloffson and scored to give the Sabres a 1-0 lead at 3:38 of the first period.

Roslovic scored off Tokarski’s glove on a three-on-two rush to tie score 1-1 at 8:23.

The Blue Jackets took a 2-1 lead at 14:04 when Roslovic took a pass from Domi, skated into the slot and scored on a wrist shot.

Buffalo tied it with less than one second left in the period when Zemgus Girgensons deflected in Colin Miller’s shot from the point on a power play.

The Blue Jackets appeared to take control with three goals in the opening minutes of the second period. 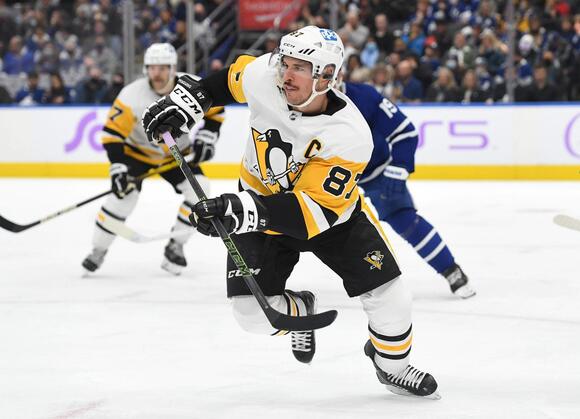 Oliver Bjorkstrand made it 3-2 when he converted a pass from Boone Jenner on the rush 24 seconds into the second period.

Domi scored from the slot off a pass from Gregory Hoffman just 31 seconds later to increase the lead to 4-2 and Aaron Dell replaced Tokarksi for Buffalo.
Gavrikov scored on a one-timer from the point at 3:41 to make it 5-2.

Buffalo rallied as Dylan Cozens beat Korpisalo on a 2-on-1 rush at 4:44 and Thompson scored his second of the night and third in two games with a one-timer from the top of the left circle on a power play at 9:55 to pull the Sabres within 5-4.

The Sabres had back-to-back power plays, including a 32-second five-on-three, in the third period but were unable to convert.

Gavrikov scored into an empty net with 45 seconds remaining and Sean Kuraly added an empty-net goal with 10 seconds left.

The Dallas Stars used four power play goals, including two in the third period, to defeat the Buffalo Sabres 5-4 on Thursday night at KeyBank Center.
NHL・1 DAY AGO
NBC Philadelphia

Double the trouble as Flyers lose 10 straight games for second time this season originally appeared on NBC Sports Philadelphia. For the first time ever, the Flyers have lost 10 or more games in a row twice during one season. The perplexing franchise history was completed Thursday night as the...
NHL・1 DAY AGO
93.7 The Fan

For the first time since the 2019-20 NHL season, the Pittsburgh Penguins faced off against the Columbus Blue Jackets. The Penguins played Friday night in Columbus missing just one name from the normal starting roster
NHL・28 MINUTES AGO
WBEN 930AM

In a season that has seen games postponed by COVID, the NHL has announced 7 Buffalo Sabres games have been rescheduled. The league says this will ensure all games are completed by the planned season end date of April 29th.
NHL・2 DAYS AGO

COLUMBUS, Ohio (WCMH) — The Blue Jackets and National Hockey League announced Wednesday the revised schedule for the remainder of the 2021-22 regular season. The new schedule reflects rescheduled dates for games postponed in December and January, as well as future games that were adjusted to accommodate team travel schedules league wide. See below for […]
NHL・2 DAYS AGO
1stohiobattery.com

Game Preview: Blue Jackets Head To Philly As Cam Atkinson Goes Up Against Columbus For The First Time

Three observations: Special teams not so special in Sabres' loss

The Buffalo Sabres, once again, let a lead slip away from them. Only this time, it was on multiple occasions in the same game. Josh Schmit has his three observations from Thursday’s 5-4 loss to the Dallas Stars:
NHL・1 DAY AGO
The Columbus Dispatch

Surprising trade between Columbus Blue Jackets, Flyers working out for both sides

The Blue Jackets and Philadelphia Flyers pulled off trade last summer that caught the hockey world by surprise, including both players involved in it. Cam Atkinson was stunned to be dealt by the Blue Jackets, with whom he’d played his entire NHL career. Jakub Voracek sensed a trade was coming, after a falling out with former Flyers coach Alain Vigneault, but couldn’t believe his next stop was right back in Columbus, where he’d started his NHL career.
NHL・2 DAYS AGO

Islanders veteran Zdeno Chara dropped Flyers defenseman Zack McEwan with an uppercut to the face, then made sure to check if his opponent was OK.
NHL・2 DAYS AGO
CBS Boston

BOSTON (CBS) — Brad Marchand is a man of the people — and one funny guy. The Bruins forward had some fun with a Boston fan ahead of Thursday night’s game against the Capitals, in a way that only Brad Marchand could. As he made his way off the ice following pregame warmups, Marchand started giving out his usual high-fives and fist bumps to the fans there to greet him. One young fan was recording it on his phone, which is when Marchand decided to have his fun. He snagged the phone as he walked through the tunnel and recorded a rather...
NHL・1 DAY AGO
Audacy

Krystof Hrabik of the AHL’s San Jose Barracuda was suspended 30 games for directing a racist gesture at Tucson Roadrunners forward Boko Imama, who is a Canadian of Congolese descent.
NHL・17 HOURS AGO
97.1 The Ticket

Where Raymond goes from here is up to him. He has the inside track for the Calder, and he’s on the path toward a long and successful career in Detroit.
NHL・2 DAYS AGO

As the Philadelphia Flyers sit near the bottom of the NHL standings, captain Claude Giroux is one of the hottest
NHL・18 HOURS AGO
The Detroit Free Press

The Detroit Red Wings have the dates for their pandemic postponed games. The NHL released dates for the more than 100 games that, halfway through the season, have had to be postponed because of COVID-19. The Wings were so hard hit by the virus they shut down days ahead of the Christmas schedule,...
NHL・2 DAYS AGO
Sportsnaut

The NHL levied $5,000 fines against Montreal’s Jonathan Drouin and Phillip Danault of the Los Angeles Kings on Wednesday, the
NHL・2 DAYS AGO
The Southern Maryland Chronicle

The NHL will play 95 games from Feb. 7-22 as part of a comprehensive update to the 2021-22 regular-season schedule announced Wednesday. The update would allow all 32 teams to complete their 82-game schedule by the season’s original end date of April 29. The three-week window in February was previously designated as a pause in […] The post NHL announces extensive updates to 2021-22 regular-season schedule appeared first on The Southern Maryland Chronicle.
NHL・1 DAY AGO