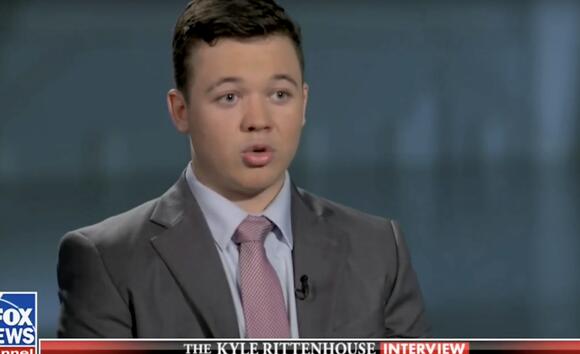 Kyle Rittenhouse , w ho last week was acquitted of all charges in the shooting of three men during political unrest in Kenosha, Wisconsin, last summer, is putting President Joe Biden on notice for what could be defamation litigation.

In an interview that aired Monday night on Fox News, the 18-year-old told host Tucker Carlson what he thought of Biden linking him to white supremacists during the 2020 campaign.

"Mr. President, if I could say one thing to you, I would urge you to go back and watch the trial, and understand the facts before you make a statement," Rittenhouse said.

Rittenhouse said Biden linking him to white supremacists was "actual malice," and added that it's "defaming [his] character for [Biden] to say something like that."

The reference to Rittenhouse came when Biden released an advertisement on Sept. 30, 2020, in which he attacked former President Donald Trump, his 2020 rival, for not disavowing white supremacists during a debate.

The ad featured an image of Rittenhouse carrying a gun during the riots in Kenosha last year.

"He went to Kenosha to help people, and what Joe Biden did and showed my son’s picture, his image, and labeled him as a white supremacist, I will take him down," the elder Rittenhouse said in a Fox News interview last year.

On Friday, a jury found Rittenhouse not guilty on all five charges in the fatal shooting of two men and injuring of a third during that unrest. Rittenhouse, who was 17 at the time of the riots, claimed he was acting in self-defense when he fired his rifle.

Both during the trial and after its verdict, many on the Left have sought to make race the driving component behind Rittenhouse's actions. The unrest broke out after the August 2020 shooting of Jacob Blake, a black man, by police .

Rittenhouse dismissed any notions that race affected his actions.

Reacting to the verdict last week, Biden said, "The jury system works, and we have to abide by it."

Biden later added to his reaction with a follow-up statement.

"While the verdict in Kenosha will leave many Americans feeling angry and concerned, myself included, we must acknowledge that the jury has spoken," he said in the statement issued by the White House. "I ran on a promise to bring Americans together, because I believe that what unites us is far greater than what divides us."

so i can go run around pointing my AR 15 at people that are in a large crowd and when someone tries to disarm me out of fear i may be an active shooter i can legally go shoot them tho i was the instigator? hmm that sounds like a good way to get away with murder to me.

all I know is that a that man had been black and pleaded self-defense he would have went to prison for the rest of his life. that's what's wrong with our criminal system 🤢

Biden says no 'cause for panic' over omicron, calling it 'the new enemy'

President Joe Biden directly addressed "frustration and fatigue" as the country approaches its third year of battling the coronavirus pandemic. Biden called the omicron variant "the new enemy" but not a "cause for panic" given the tools the country has to combat the pandemic. "All I know is that after...
PRESIDENTIAL ELECTION・9 HOURS AGO
WashingtonExaminer

President Joe Biden, who promised to unite the nation in his inaugural address one year ago, has failed in epic fashion in the eyes of voters, according to a series of year one polls out this week.
PRESIDENTIAL ELECTION・16 HOURS AGO
WashingtonExaminer

President Joe Biden expressed disbelief at former President Donald Trump's hold on the Republican Party, claiming to have spoken to at least five GOP senators who are afraid of clashing with his predecessor. “Did you ever think one man out of office could intimidate an entire party where they’re unwilling...
PRESIDENTIAL ELECTION・9 HOURS AGO
Newsweek

Both sides have downplayed the idea that there's animosity between the governor and the former president.
POTUS・21 HOURS AGO

Ellis tweeted after being served a subpoena by the January 6 Committee investigating the Capitol attack.
POTUS・6 HOURS AGO
Newsweek

Trump mentioned the death of Champ while chastising the president for spending time at his Delaware home.
PRESIDENTIAL ELECTION・19 HOURS AGO
Deadline

UPDATE, 2:55 PM PT: Joe Biden wrapped up a surprisingly long presidential press conference, lasting nearly two hours, insisting that he was willing to reach out to any Republican but that he was facing an opposition that was even different than when he served as vice president to Barack Obama. Toward the end of the press conference, in which he took questions from 22 reporters, ranging from those from The New York Times and Newsmax, Biden offered a critique of the media — and the potential demise of cable news networks. He seemed to be making the point of how much media...
PRESIDENTIAL ELECTION・9 HOURS AGO
Newsweek

Jimmy Kimmel on White House’s free Covid tests: ‘Great idea, if this was a year ago’

Jimmy Kimmel lamented the egregiously low vaccination rate in the US on Tuesday evening, citing a study that found it had the second lowest rate (66%) of the 15 countries tracked. “It’s almost like people here are getting bad information from someplace, you know?” Kimmel said. “The only country below us is Russia (49%), which is kinda nice – our countries haven’t been on the same page since like Rocky fought Drago.”
PUBLIC HEALTH・15 HOURS AGO
RNB Cincy 100.3

'Go back and read what I said': Biden snaps back at reporter who asked him about the president's comparison of political opponents to white supremacist Bull Connor

President Joe Biden snapped at a reporter Wednesday who asked if invoking white supremacists like Bull Connor and George Wallace and saying those who didn't support voting rights legislation were in the 'same camp' as them backfired. 'No I didn't say that. Look what I said. Go back and read...
PRESIDENTIAL ELECTION・8 HOURS AGO
POLITICO

President Joe Biden on Wednesday hit out at Republicans for acting to block his agenda without offering any alternative solutions to the problems his administration is trying to address.Speaking at a White House news conference on the eve of his one-year anniversary in office, Mr Biden told reporters he was caught off guard by the vehemence of the GOP’s opposition to anything and everything he has proposed, and by their singleminded effort to ensure his presidency fails."I did not anticipate that there would be such a stalwart effort to make sure the most important thing was that President Biden...
PRESIDENTIAL ELECTION・9 HOURS AGO
Newsweek

One political scientist told Newsweek that the apparent feud between Trump and DeSantis was "a fine mess" that could seriously damage the Republican Party.
POTUS・14 HOURS AGO
Newsweek

Amid reports of hostility between Trump and DeSanits, a spokesperson for the Republican governor told Newsweek such talk is a "fabricated media narrative."
POTUS・1 DAY AGO
The Independent

A former Republican congressman has argued Florida governor Ron DeSantis would be far more “dangerous” as the standard-bearer of the Republican base.“Ron DeSantis is far more dangerous than Donald Trump,” former Florida representative David Jolly told MSNBC on Tuesday. “He’s more savvy. He’s more coy. And he doesn’t have the pitfalls that Donald Trump does.”The one-term congressman, formerly a Republican and now an independent, lashed out at the Florida governor, one of the most popular Republicans in the country, lambasting his handling of the Covid crisis, critical race theory, voting rights, and other matters in the state.“Florida’s not free...
PRESIDENTIAL ELECTION・6 HOURS AGO

Although Joe Biden has been known to stumble on his words, leave it to the internet to get riled up over comments he made last summer.Yesterday, a video of then-presidential candidate Biden claiming George Floyd’s death had a greater global impact than the assassination of Dr Martin Luther King Jr received renewed criticism amid resurfacing in new posts across social media on MLK Day. Biden made the comments in June 2020 at an economic reopening roundtable in Philadelphia held weeks after Floyd’s death. Biden’s point was emphasizing the role smartphones have played in mobilizing people all over the world to...
PRESIDENTIAL ELECTION・1 DAY AGO
POLITICO

Press secretary Jen Psaki said the U.S. response to an invasion would be “swift, severe, and united,” after the president said it would depend on the severity of Russia’s actions.
POTUS・4 HOURS AGO
Newsweek