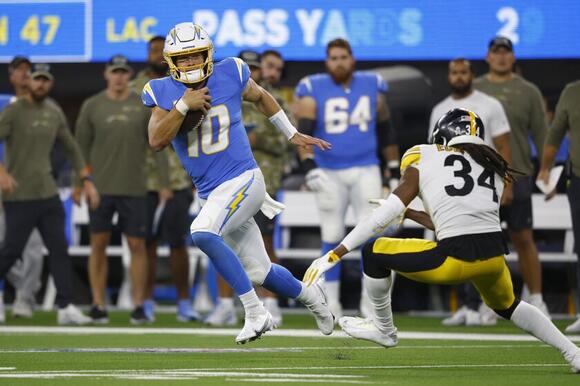 When a Steelers pass rusher named Alex Highsmith blew past right tackle Storm Norton on Sunday night, it appeared Chargers quarterback Justin Herbert would take a sack or throw the ball away on third down.

An enduring NFL truth is that Chargers quarterbacks do not run away from edge rushers.

But that’s exactly what Herbert did to gain 13 yards on a night he set a franchise record at the position by rushing for 90 yards.

When Herbert decides to run fast, he resembles Secretariat in comparison to Philip Rivers and Dan Fouts despite outweighing those former pocket-bound passers who made the majority of the franchise’s starts for a combined 25 seasons.

Herbert outsprinted not only Highsmith — who clocked at 4.70 seconds in the 40-yard dash at the 2020 NFL Scouting Combine — but a few other Steelers defenders in the 41-37 victory at the Kroenke Dome.

“He’s looking like Emmitt Smith,” Michaels said as Herbert ripped off a 36-yard run, in which he eluded safety Terrell Edmunds.

It wasn’t a stunning performance, in comparison to Herbert’s other recent efforts.

In his final game for Oregon , he rocketed past Wisconsin defenders and scored three touchdowns to lead the Ducks to a 28-27 victory in the Rose Bowl.

He rushed for 66 yards in his sixth NFL start, at Jacksonville last year, and went for 20-plus yards in five other games.

What differed against the Steelers is he resorted to more sprints than he had in any of his other 24 starts.

He was opportunistic, exploiting pass rushers and pass defenders. He was decisive, pulling the ball down and zooming across the carpet.

“When it’s drained out and he sees daylight,” said Chargers coach Brandon Staley, “now he becomes a tailback.”

If he’s the NFL tallest tailback at 6-foot-6, Herbert showed an awareness of his limitations by sliding on the fake grass several times or running out of bounds rather than allow a defender to hit him.

For longtime Chargers observers, an explosive Bolts quarterback takes getting used to.

John Hadl, who rushed for 13 touchdowns as a college running back and QB with the Kansas Jayhawks, brought good mobility to the AFC club in 1962.

Herbert is faster than any of aforementioned Bolts QBs were, including the agile Brees, who clocked 4.83 in the 40 out of Purdue and rushed for 25 TDs.

He’s a faster sprinter than Patrick Mahomes, the Chiefs star who also logged a 4.83. (Mahomes, agile and deft on option runs and pitches, is more varied as a rusher. The versatility played a key role in his team’s Super Bowl victory two years ago, but also dealt Mahomes a neck injury last season.)

At one specialized run — quarterback sneaks — Herbert is much better than Rivers if only because he attempts those plunges and leaps. Remember, Rivers went six-plus years without attempting a sneak for the Chargers and deferred to designated sneaker Jacoby Brissett last year with the Colts.

First in the AFC in Total Quarterback Rating (67.0), young Herbert has shown he’s an accurate, strong-armed passer both from the pocket and on the move.

The extra dimension his sprint speed creates will give defenses more problems to solve. It will clarify what Herbert and teammates see from defenses.

“What happens is, if you’re trying to play this guy a certain type of way, if you’re going to try to play this split-safety man-under (coverage), and you’re in a four-man rush, well, the one guy that they’re not accounting for is the quarterback,” said Staley, who coordinated the Rams’ defense last year.

When Herbert zapped the Jags for 31 yards last year on a sprint around end, Fouts lost bragging rights for longest run by an Oregon alum quarterbacking the Chargers.

Fouts ran for 26 yards in a 1979 contest against the Atlanta Falcons. Really, he did. More than 50,000 fans at San Diego Stadium witnessed the stiff-legged, 28-year-old QB ambling downfield, Dec. 2.

Rivers, whose 40 time at North Carolina State was about 5.2 when converted to electronic timing used by the Combine, had his best rushing day in his first season as San Diego starter when he carried six times for 24 yards. The Steelers were the opponent.

Huge chunks of vacant football field that Rivers could only dream about running across are now available to his full-time successor, whose powerful arm brings other grass into play that was off limits.

"He's really an excellent player," said Mix, a Hall of Famer and mainstay for San Diego's 1963 AFL titlist team. "I think he's going to win over those L.A. fans."

The 2021 NFL Rookie of the Year candidates are settled. Ja’Marr Chase put past drop issues to bed long ago
NFL・9 HOURS AGO
chargers

Below are 10 quick-hitting insights from quarterback Justin Herbert's 2021 regular season:. 1) Herbert broke the franchise's single-season passing touchdowns record in Week 17 with a 45-yard score to Mike Williams, which gave the quarterback 35 on the season, one more than Philip Rivers' 34. Herbert threw three more touchdowns in Week 18 to extend the record to 38.
NFL・1 DAY AGO
Sportsnaut

Super Bowl 2022: The Tampa Bay Buccaneers are the reigning NFL champions, but who'll make the playoffs — and lift the Lombardi Trophy at the end of this season?
NFL・10 HOURS AGO
ClutchPoints

The Kansas City Chiefs officially booked their ticket to a rematch with Josh Allen and the Buffalo Bills in the Divisional Round after blowing out the Pittsburgh Steelers on Sunday. As we all know, Patrick Mahomes and Co. beat the Bills 38-24 last season in the AFC title game and...
NFL・2 DAYS AGO

Following yet another late-season meltdown, Kyler Murray and the Arizona Cardinals are headed home for the winter. Losers of four
NFL・1 DAY AGO
The Spun

Stephen A. Smith made sure to make Cowboys legend Michael Irvin sad on Monday’s edition of First Take. Smith was going through the clips of sad Cowboys fans that were shown during Sunday’s game and Irvin looked upset throughout the entire segment. Based on this video, Smith couldn’t...
NFL・2 DAYS AGO
Sportsnaut

NFL picks against the spread. NFL Divisional Playoffs edition. Oh boy, this two-day slate is going to be an absolute
NFL・2 DAYS AGO
The Spun

Ben Roethlisberger’s NFL career came to a close on Sunday night with the Steelers’ 42-21 loss to the Chiefs. The Steelers started out the game strong (at least defensively) before giving up 21 points in the final six minutes of the second quarter. With how the Steelers offense...
NFL・2 DAYS AGO

The Dallas Cowboys (12-5) pumped their chests with confidence and swagger headed into Sunday's Wild Card Game against the San Francisco 49ers (10-7) at AT&T Stadium, but left disappointed after a 23-17 loss to a historic NFC rival. The entire organization is being heavily criticized for the loss, but the...
NFL・1 DAY AGO
Sportsnaut

If the Chicago Bears were intent on doing comprehensive research for their simultaneous searches for a new head coach and general manager, perhaps their Saturday night homework should have ended with a peek into the interview rooms at Highmark Stadium in Orchard Park, N.Y. Start with Bill Belichick. Legendary coach of the New England Patriots. Defensive mastermind. Six-time Super Bowl winner. ...
NFL・2 DAYS AGO
Sportsnaut

At the ripe age of 44, Tampa Bay Buccaneers quarterback Tom Brady is doing things that those 20 years younger
NFL・1 DAY AGO
The Spun

There aren’t many quarterbacks who receive as much criticism as Kirk Cousins does. Ever year, it feels like the veteran signal-caller is under fire. During the latest episode of the “All Things Covered” podcast, Minnesota Vikings cornerback Patrick Peterson shared his thoughts on Cousins’ future with the team. Some analysts have speculated about Cousins’ future in large part because the team will have a new regime in place for the 2022 season.
NFL・1 DAY AGO
USA TODAY

Paul Finebaum Has Named His No. 1 Team For Next Season

ESPN college football analyst Paul Finebaum isn’t wavering off his stance that Alabama should be the nation’s top team heading into next season. Speaking on “McElroy and Cubelic In the Morning,” Finebaum revealed that he’s still high on the Tide, notable draft losses and transfers notwithstanding.
NFL・1 DAY AGO
Sports Illustrated

Rice is headed to Los Angeles to play for Lincoln Riley and the Trojans.
NFL・1 DAY AGO
Sportsnaut

Five-star quarterback transfer Jaxson Dart is one of the most highly-sought-after prospects in the 2022 portal. And on Wednesday, he made an interesting visit to a prospective school. According to reports from On3 Sports, the now-former USC signal caller traveled to his hometown of Provo, Utah to visit with the...
PROVO, UT・2 HOURS AGO