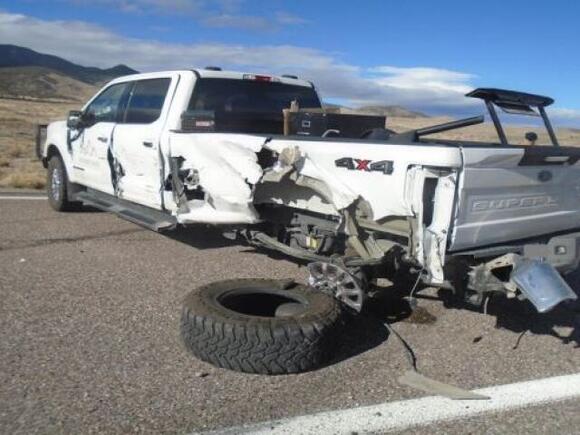 New details about the crash that killed Lee's Discount Liquor CEO Kenny Lee in northern Nevada were released on Monday.

Investigators with the Nevada Highway Patrol report the crash happened when a Dodge Caravan, "for reasons unknown," failed to maintain its lane of travel and crossed into oncoming traffic on the U.S. 93 Alternate on Friday morning.

The driver of a northbound Ford pickup steered onto the shoulder of the highway in an effort to avoid the oncoming van, according to NHP. The van sideswiped the left side of the pickup and hit the left side of a flatbed trailer the pickup was towing.

The person driving the Dodge Caravan was "unrestrained" and was ejected from the vehicle, officials said. That driver has since been identified as Lee, who was 53 years old.

Two people inside the pickup, a male driver and male passenger who were not publicly identified, sustained minor injuries in the crash and were not transported to the hospital.

NHP released photos of the crash scene on Monday.

Editor's note: A previous version of this report identified the passenger in the Ford pickup as female. NHP has since corrected its press release to indicate the passenger is male.

County Henrico in Virginia One man determined that performing his job duties as a police officer for Henrico County, Virginia, was insufficient. The county officer stopped his squad car when he noticed a driver in need, and he did something unexpected for Chy-Niece Thacker.
HENRICO COUNTY, VA・5 DAYS AGO
San Herald

Policeman pulls over a woman and instructs her to open the trunk, unaware that he is being recorded.

When he saw a driver in trouble, the county officer stopped his car and did something unexpected for Chy-Niece Thacker. Not only did the police officer tell her that her brake light was out, but he also did something else that shocked her and made her want to tell everyone about it on Facebook.
10 HOURS AGO
San Herald

A vehicle in which they were riding was fired upon on Sunday night, killing a Texas couple who had been together since middle school and were expecting their first child. The shooting, which San Antonio police chief William McManus described as a "targeted hit," happened at the junction of Olive Street and Aransas Avenue, he said during a press conference on Sunday. There have been no detentions.
SAN ANTONIO, TX・2 DAYS AGO
KTNV 13 Action News

An elderly husband and wife from Las Vegas, Nevada were found dead in Death Valley National Park on Jan. 13, according to law enforcement officials.
LAS VEGAS, NV・1 DAY AGO
The Independent

Rescue personnel have found a hiker who was lost on the same mountain where actor Julian Sands is reported to be missing.Jin Chung, 75, was reported missing on Sunday after he did not return from a hike on the 10,064-foot Mt Baldy in California.Authorities said he had carpooled with two others and planned to meet at the vehicle at 2pm but did not return.On Tuesday, images showed Mr Chung being put in an ambulance, reported NBC LA.The San Bernardino County Sheriff’s Department said he had a leg injury and some weather-related injuries, but was able to walk with assistance...
SAN BERNARDINO COUNTY, CA・2 DAYS AGO