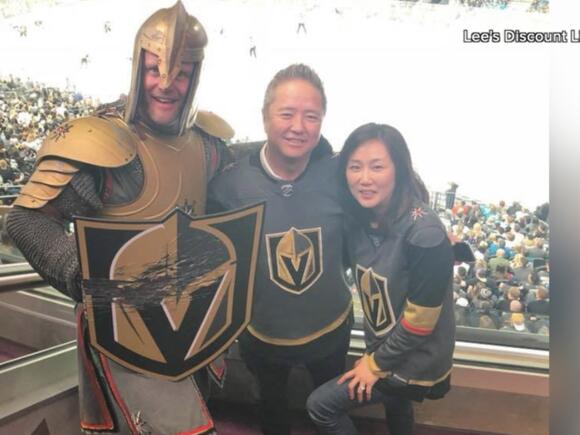 An inspiration and a pioneer for aspiring entrepreneurs: that’s how friends and acquaintances of Kenny Lee remember the CEO of Lee’s Discount Liquor. Lee was killed in a crash last Friday in northern Nevada.

Many in the Las Vegas business community remember Lee for “the infectious smile, the energy and charisma that he had," said Randy Char with Las Vegas Sotheby's International.

“He just brings joy to people's lives, and you just don’t find people like him that are often so giving but also so social,” Char said.

Char, who knew Lee in professional and philanthropic circles, says he had a selfless and charitable personality. Lee gave millions of dollars in donations to various community initiatives.

“He has this kind of quiet confidence and he’s just so giving, but he does it in a way that’s low-key and you can tell it’s not about him,” Char said.

Evan Louie, another professional acquaintance and local entrepreneurm, sees Kenny Lee as a role model for entrepreneurs after humble beginnings with his family immigrating from South Korea to create Nevada’s largest liquor retailer.

“They’re one of the iconic businesses here that are Asian American that thrived and very successful,” Louie said.

He says Kenny Lee was always present in the community and a positive influence wherever he went.

“He generally had a good disposition, so there’s always somebody saying good things and, 'oh, you should reach out to Kenny Lee!.' He was a connector as well,” he said.

A connector that wanted to put the Vegas community first.

There are plans to have a public vigil Friday morning at the Lee’s Discount Liquor store at the corner of Azure and Tenaya at 9:30 a.m. where people can pay their respects. The Lee family is requesting that, in lieu of flowers, donations are made instead to New Vista .

A second Starbucks location in the Las Vegas valley has announced its plans to unionize, according to a letter sent to executives by Starbucks Workers United.
LAS VEGAS, NV・3 HOURS AGO
KTNV 13 Action News

A's running out of time to find home in Oakland, Las Vegas

The Oakland Athletics have spent many years trying to get a new stadium. Time is running out on their efforts.
LAS VEGAS, NV・3 HOURS AGO
KTNV 13 Action News

Native Hawaiians who have been priced out of Hawaii are finding more affordable places to live in cities like Las Vegas.
LAS VEGAS, NV・2 DAYS AGO
KTNV 13 Action News

The state of Nevada is close to hitting a critical point in health care as the shortage of nurses continues to get worse.
NEVADA STATE・16 HOURS AGO
KTNV 13 Action News

Authorities in Nevada aired the results of the investigation of the November 2020 police killing of a man after he shot two women dead, wounded a teenage girl and abducted a 12-year-old boy.
HENDERSON, NV・2 DAYS AGO
KTNV 13 Action News

Las Vegas police said they are responding to a "dynamic scene" shooting in West Las Vegas in the 900 block of Doolittle Avenue.
LAS VEGAS, NV・1 DAY AGO
KTNV 13 Action News

The Mirage hosts job fair to fill more than 300 positions

The positions available will include food and beverage, hotel operations and security, which all have multiple positions that range from on-call to part-time and full-time.
LAS VEGAS, NV・1 DAY AGO
KTNV 13 Action News

What does the future hold for our city? Mary Beth Sewald, president and CEO of the Las Vegas Chamber of Commerce, shared what to expect at Preview Las Vegas.
LAS VEGAS, NV・7 DAYS AGO
KTNV 13 Action News

The first case of coronavirus confirmed in the U.S. happened on Jan. 20, 2020 in the state of Washington.
LAS VEGAS, NV・5 DAYS AGO
KTNV 13 Action News

Winter isn't over, but sunsets are getting later and later

The latest sunsets of the year in Las Vegas begin on the summer solstice — June 21 — when the sun drops below the northwest horizon at 8:01 p.m.
LAS VEGAS, NV・6 DAYS AGO
KTNV 13 Action News

Great Buns Bakery: the bread & butter of many restaurants and resorts

Las Vegas welcomes 40 million visitors a year. And it takes a lot of food to keep everyone full. We're introducing the company that’s the bread and butter of many local restaurants and resorts.
LAS VEGAS, NV・6 DAYS AGO
KTNV 13 Action News

Why coyotes are being spotted in the Las Vegas valley

The trail of violations at SeaQuest in the Boulevard Mall is growing longer as the interactive animal attraction is in more trouble with the feds.
LAS VEGAS, NV・1 DAY AGO
KTNV 13 Action News

A Las Vegas man, Norman Coles recorded video of a pack of coyotes running through the lot of an Albertsons and crossed the street into Sunset Park.
LAS VEGAS, NV・6 DAYS AGO