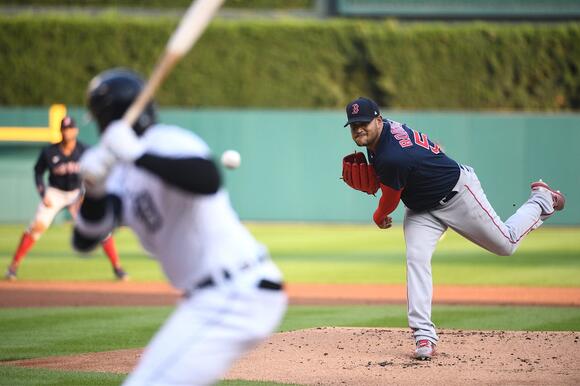 Shortly after the World Series ended, Al Avila contacted the agent of Eduardo Rodriguez. And shortly after that, Rodriguez contacted Miguel Cabrera. So it was that Rodriguez was introduced at Comerica Park Monday afternoon on the heels of signing a five-year, $77 million deal with the Tigers.

"Eduardo is a huge addition to our rotation," said A.J. Hinch. "We said early on, we have to get the pitching right. This is a step in that direction and it’s because he’s a winner."

Rodriguez had several suitors in free agency after six strong seasons in Boston. The Red Sox wanted him back, and the Blue Jays and Angels showed interest, too. The pitcher did his homework. He studied the teams who came calling, like scouting an opposing lineup. He said he was drawn to the Tigers' "history" and their future. He said he sees "the way they’ve started to reconstruct the team to get ready to compete for championships."

And "one of the special things," Rodriguez said, "was Miggy."

Rodriguez and Cabrera are close friends, bonded by their Venezuelan roots. They were teammates at the 2017 World Baseball Classic. They were briefly foes last season when the Red Sox came to Detroit amid Cabrera's chase for 500 homers and Rodriguez told him, "I love you, bro ... but I don’t want to be the 500." When Al Avila and Hinch made a pitch to Rodriguez over a dinner in Miami earlier this month, Rodriguez followed up with Cabrera. And when Rodriguez received Detroit's formal offer, he said he didn't "wait longer" to sign it.

"I know there were a lot of teams out there that wanted me to sign with them and had interest in discussing a contract," said Rodriguez. "But after I talked to Miggy and I started to see what Detroit is, what Detroit’s all about, I made the choice and decided to sign with them."

Rodriguez, 29, used to watch Tigers playoff games on TV when he was toiling in the minors. Back then, Cabrera headlined a roster full of Venezuelan stars including Victor Martinez, Anibal Sanchez and Omar Infante. Rodriguez said "I know how it gets here when you get to the postseason." He's confident the Tigers will get back there soon.

In accepting Detroit's offer, Rodriguez reportedly turned down a multi-year offer from the Red Sox. He also turned down their $18.4 million qualifying offer, not that it was much of a decision. Asked if he ever considered it, Rodriguez smiled and said, "I’m gonna be honest with you: do you prefer 18 or 77? You know what I mean? Just thinking about me and my family, my two kids, my future."

His family was on hand for his introduction in Detroit. It was a long-awaited day for the Tigers. They hadn't introduced a marquee free agent since Jordan Zimmermann and Justin Upton five years prior. Rodriguez's arrival signals the club's intention to win next season. It won't happen without him.

"If you look at his track record, his pure stuff, his competitiveness, his durability, his ability to miss bats, he gets soft contact on the ground, there’s nothing not to like about him," said Hinch. "He comes in and immediately improves our rotation that we’re (already) really excited about.

"Once we met with him and you start to learn more about the person and what makes him tick, we weren’t getting out of that restaurant without landing him. It was a good marriage because what he does well is exactly what he preach, and we feel like we can unlock a few things to make him even better."

On the surface, Rodriguez is coming off the worst season of his career. A deeper review suggests the Tigers might have signed one of the best pitchers in baseball for about $15 million per year. Rodriguez will join Casey Mize, Tarik Skubal and Matt Manning, and likely another veteran addition, in what could be a dominant rotation for years to come. He was the first major domino to fall in free agency and he landed in Detroit.

"For me, Eduardo coming here shows that people outside this club have an understanding of where we’re going, because the people inside this club have been saying the same internally since the first day I’ve been on the job," said Hinch.

It starts with the pitching. With Rodriguez, the pitching just got stronger. The Tigers have a ways to go yet, further than Cabrera, Hinch or Avila might care to admit. But they're going there together, and Rodriguez can help them close the gap.

"I want to be part of the reconstruction," he said. "That’s why I came to Detroit."

ESPN's Alden Gonzalez doesn't think that the Dodgers would be willing to sign Freeman to a long-term deal.
MLB・2 DAYS AGO
Sports Illustrated

Frequent Buck Showalter collaborator Brian Butterfield was briefly considered for a role on the Mets’ coaching staff but was turned down for his refusal to get vaccinated.
MLB・2 DAYS AGO

USA TODAY Sports broke down the 12 most intriguing cases on the ballot, with all you need to know heading into Tuesday’s momentous announcement.
MLB・1 DAY AGO
Inside The Phillies

Inside the Phillies fielded mailbag questions while the MLB lockout is in full force.
MLB・2 DAYS AGO
Inside The Dodgers

A polarizing figure throughout his career, A-Rod ranks fourth on the all-time home run list, but was suspended for violating MLB's drug policy.
MLB・1 DAY AGO

This is the last Five-Tool Newsletter before the results of the BBWAA Hall of Fame election are announced, so I’ll be revealing my hypothetical ballot today. Sure, it has no bearing on the actual process, but it’s fun. And as the lockout drags on, there aren’t too many better things to talk about. ...
NFL・2 DAYS AGO
Inside The Royals

The Kansas City Royals drafted pitcher Ben Hernandez fresh out of high school in 2020, but he could display quite a bit of maturity and growth just two years later.
MLB・1 DAY AGO
Inside The Dodgers

The Dodgers catcher explained how he approaches the highs and lows of a MLB season.
MLB・1 DAY AGO
USA TODAY

Three weeks from when pitchers and catchers usually report and no one knows when spring training will start or if it will be a truncated schedule.
MLB・21 HOURS AGO
Inside The Phillies

Jean Segura doesn't put up flashy numbers or make dazzling defensive plays, but all together he is one of the most well-rounded players in the National League.
MLB・16 HOURS AGO
Inside The Phillies

A new change will be implemented in the upcoming minor league season.
MLB・1 DAY AGO
Inside The Dodgers

Thanks to the hot stove freeze, there’s time to sit back and explore some of the bigger question marks surrounding the Dodgers for 2022. With Walker Buehler and Julio Urias atop the rotation, Dave Roberts and the Dodgers will have some decisions to make on who will fill out the remaining spots ...
MLB・1 DAY AGO