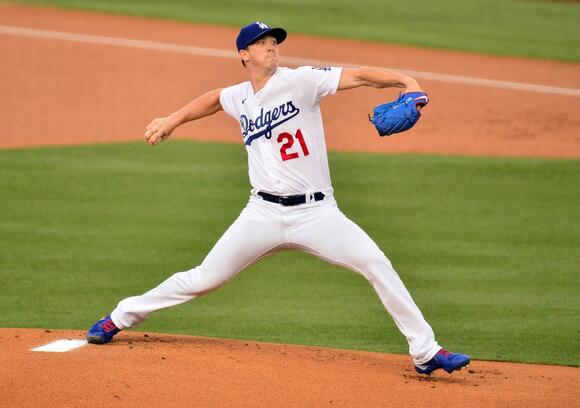 Last week, the NL Cy Young Award was announced and, sadly, it didn't go to any of the three deserving Dodgers starters. Julio Urias, who was the only pitcher in baseball to get twenty wins last season, finished eighth, while Max Scherzer and Walker Buehler finished third, and fourth respectively.

Walker Buehler being the consummate professional that he is, took to Twitter to congratulate the NL winner and Milwaukee Brewers starter Corbin Burnes , as well as the AL winner, Blue Jays lefty Robbie Ray.

Buehler entered the month of September leading all pitchers in ERA(2.05) and was widely expected to take home the Cy Young . He also had a 0.915 WHIP and was a key component on one of baseball's finest teams . Then, in the final full month of the season, Buehler had two uncharacteristically awful starts.

First, there was a Sunday Night baseball collapse against the Giants where he threw for only three innings and gave up six earned runs. Unfortunately, it was a national primetime game, which meant that voters who don't usually get to watch every game of every contender were left unimpressed with the 27-year-old.

Next, came Coors Field where he went only 3.2 innings and gave up five earned runs. While this may not come as a shock to anyone given that it is Coors Field, two disastrous starts in a row only hurt his chances. All in all, in his final six starts of the regular season, Buehler recorded a dismal 4.83 ERA.

Between the previous Covid shortened season and his 207.2 innings pitched this year, which was well above his previous career-best of 182.1 IP, there's little doubt that fatigue was a factor. But, as is with every other pitcher, it's something he's got to learn to cope with at some point.

It sucks that Walker Buehler didn’t win his first Cy Young this season. But, the future Hall-of-Famer still has many accolades yet to collect in his career and I can safely say that it would be a shock if he isn’t the one receiving Cy Young congratulatory tweets in the near future.

Add video gaming to Betts' growing list of non-baseball interests.
MLB・2 DAYS AGO
Inside The Dodgers

The 2021 season was one heck of a roller coaster for Max Muncy. The slugging first baseman carried the Dodgers in the first half with his bat, which resulted in him being in early MVP conversations.  But that first half was short-lived as Muncy came tumbling back to earth in the second half, ...
MLB・11 HOURS AGO
Sports Illustrated

In the mid-2000s, Andre Ethier helped launch a new era of success for the Dodgers organization. The outfielder made his debut in Los Angeles in 2006, when James Loney, Russell Martin, and Matt Kemp were also called up. He quickly established himself as one of the best up-and-coming players in the league.
MLB・2 DAYS AGO
Inside The Dodgers

Betts expressed his elation with Ortiz making the Hall-of-Fame.
MLB・6 HOURS AGO

There is a lot of debate among Dodgers fans of all eras about who the best pitcher in team history is. Who is the greatest Dodger pitcher between Sandy Koufax and Clayton Kershaw?  We can kick things off with Sandy Koufax. When he was at his best, Sandy Koufax was nearly untouchable with his ...
MLB・14 HOURS AGO
USA TODAY

Roger Clemens, the seven-time Cy Young winner, is in his final year of eligibility on the Hall of Fame ballot.
MLB・2 DAYS AGO
Audacy

Barry Bonds, Roger Clemens and Sammy Sosa all failed to make the Hall of Fame in the final year of eligibility, which led to a lot of passionate reactions across social media.
MLB・1 DAY AGO
USA TODAY

Alex Rodriguez, a three-time MVP whose 696 home runs trail only Barry Bonds, Hank Aaron and Babe Ruth, received just 34.3% of the votes in his debut.
MLB・1 DAY AGO

David Ortiz needed just one swing to power his way into baseball’s Hall of Fame, narrowly punching his ticket to Cooperstown.
MLB・1 DAY AGO
Audacy

MLB Network’s Rob Parker did not vote for David Ortiz citing a gray area with PEDs, but he voted for Barry Bonds, Roger Clemens and Sammy Sosa, leading to one of his colleagues to call him out.
MLB・1 DAY AGO
USA TODAY

After falling short in their final year on writers' ballot, Bonds, Clemens are eligible for consideration by Hall of Fame's Today's Game Committee.
MLB・1 DAY AGO

From a pure on-field standpoint, Barry Bonds is considered the most-feared hitter in the modern history of Major League Baseball.
MLB・1 DAY AGO
CBS Boston

BOSTON (CBS) — It wouldn’t be Hall of Fame season if a member of the baseball media wasn’t twisting himself into a pretzel for all the world to see. Enter Jack Curry of the Yankees’ broadcast network. Curry revealed his ballot on Tuesday, which is the day that the Baseball Hall of Fame will announce which players — if any — will earn enshrinement this year. Curry used eight of his allowable 10 votes this year, and for the first time in their 10 years of eligibility, Barry Bonds and Roger Clemens received his vote. The reason Curry hadn’t voted for Bonds and...
MLB・1 DAY AGO
92.3 The Fan

Should MLB players from the steroid-era be allowed into the Hall of Fame? Jay Crawford says it does a disservice to the sport to ignore them. Hear why with Baskin and Phelps!
MLB・1 DAY AGO
WFAN Sports Radio

Shortly after he was officially denied entry to the Baseball Hall of Fame on his tenth and final try, Roger Clemens issued a statement on Twitter verifying that he’s fine without the honor.
MLB・1 DAY AGO
CBS Boston

BOSTON (CBS) — David Ortiz got a very important phone call on Tuesday night, letting him know that he is now a Baseball Hall of Famer. Big Papi was pretty pumped to receive that call. Ortiz was in the Dominican Republic surrounded by family and friends — including former Boston teammate and fellow Hall of Famer Pedro Martinez — when he received the news from Jack O’Connell of the BBWAA. “I’m calling you from Cooperstown, New York to let you know that the baseball writers have elected you to the National Baseball Hall of Fame,” O’Connell told Ortiz. With that, Ortiz threw his...
MLB・1 DAY AGO
99.5 / 102.7 THE BOX

Willie Mays has repeatedly called for Barry Bonds' induction into the baseball Hall of Fame. Now, the home run king is effectively shut out from inclusion in what many consider to be baseball's greatest honor.
MLB・18 HOURS AGO
CBS Philly

PHILADELPHIA (CBS) — A couple of Phillies greats will find out Tuesday night if they’ll get the call from the Baseball Hall of Fame. World Series Champions Jimmy Rollins and Ryan Howard are on the ballot for the first time. They need at least 75% of the votes in order to be immortalized forever in Cooperstown. The voting results will be announced at 6 p.m. on Tuesday.
MLB・1 DAY AGO
Denver7 News KMGH

Todd Helton continued his climb toward immortality on Tuesday, inching closer to reaching the Hall of Fame.
MLB・1 DAY AGO