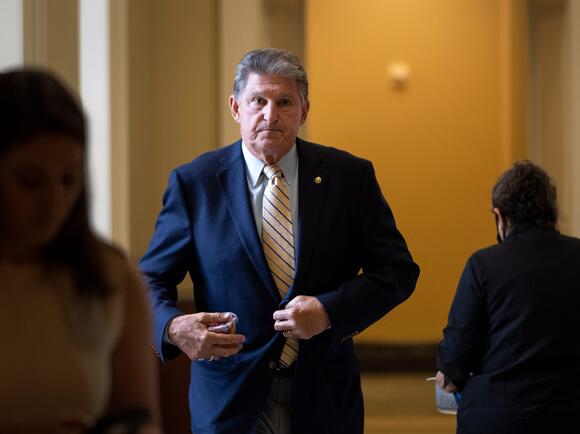 But it sets up a showdown in the 50-50 Senate, where the centrist Democratic Sens. Joe Manchin of West Virginia and Kyrsten Sinema of Arizona are influential swing votes who haven't yet given a thumbs up to the House bill.

Senate Democrats want to pass it by Christmas. Here are five provisions that could fall out of the House bill in the next few weeks.

A key part of the House bill would set up four weeks of paid leave for new parents to take care of a newborn child, along with sick leave starting in 2024. The US is currently an outlier as the only wealthy nation without any national paid leave program for its citizens.

But the program faces strong resistance from Manchin. He's argued that it could grow the national debt and a deal could be struck with Republicans on an alternate version instead. The West Virginia Democrat told Insider last month that he backs a payroll tax on workers and employers instead of making it federally funded.

A group of House Democrats want to raise the total amount of state and local taxes that people can shave off their federal taxes to $80,000 from $10,000. The program would run through 2030 and expire soon afterward.

Some Senate Democrats including Michael Bennet of Colorado, Jon Tester of Montana, and Bernie Sanders of Vermont are balking since it largely benefits wealthier Americans in high-tax states like New York and California, handing them a hefty tax break instead of a tax hike. Sanders is negotiating an alternate plan with an eye towards establishing income thresholds.

Manchin hasn't publicly commented on the SALT deduction. But a past vote may offer a clue to his approach: He was the lone Democrat who backed a GOP proposal to establish the cap in late 2017. He also cast a follow-up vote on a rival Democratic amendment to preserve it and avoid hiking taxes on middle-class families, suggesting he could fall somewhere in the middle between both approaches.

Another provision at risk of falling out of the Democratic plan is a $35 monthly cap on insulin costs, designed to help  cut rising cost of healthcare and fulfill a Democratic campaign promise.

"We are halting Big Pharma's outrageous price hikes and, in addition to that, we are dramatically lowering healthcare costs," House Speaker Nancy Pelosi said in a floor speech on Friday.

But Senate Majority Leader Chuck Schumer suggested Sunday that the Senate parliamentarian could advise Democrats to drop it from the bill if it doesn't comply with strict budgetary rules.

Sanders is the leading Democrat spearheading a push for an expansion of Medicare so it would provide dental, vision, and hearing benefits. Schumer backs it as well.

"The American people overwhelmingly demand that we expand Medicare to cover dental, eyeglasses and hearing aids," Sanders said in a statement on Friday.

But it faces a roadblock from Manchin, who argues that enlarging Medicare could further burden its finances and render it insolvent within years. "If we're not being fiscally responsible, that's a concern," he told reporters last month.

There is a measure within the House bill to provide up to 6.5 million unauthorized immigrants with provisional work permits.

Yet the parliamentarian may strike it down and say it doesn't abide with the rules governing reconciliation, the party-line process that Democrats are employing for this legislation. The official has already shot down two past Senate Democratic measures aimed at establishing a path to citizenship.

wow...if we break the law we go to jail, but if you come here illegally you get free stuff and work permits so they can work and send their money to their homeland to build big houses. We can't even take care of our own homeless vets. We can't save the world.

Biden bill shows the lies cutting taxes for the wealthy gee ! when will people realize what a sham this dictator is

This is so simple Pelosi. Get it done with immigrants and immigration. Trade the daca and immersion of all illegal immigrants since 2015 for walls on both borders. The pandemic shows we sure need them for the next pandemic, if not this one still, so the wals will not be a negative. It will pay for itself with the elimination of our border patrol as it currently stands. Let the Republicans round up everyone who came in illegally after 2015 as soon as both borders are complete. And the immersion will close most of our borders from bringing legal immigrants' families into our country for 10 years after the walls are done, unless they want to trade souls amongst themselves. That'll give us some soaps to keep our minds busy. Do it before next year's elections

Manchin remains peeved over a White House statement that singled him out, The Washington Post reported.
CONGRESS & COURTS・1 DAY AGO
Business Insider

Unpacking some of the wildest theories of what the Biden White House may do with the looming Supreme Court vacancy. What happened: This happens almost every time there's a vacancy atop the nation's highest court, but let's walk through why some of the wildest ideas about the Supreme Court vacancy almost without a doubt won't happen.
CONGRESS & COURTS・8 HOURS AGO
Business Insider

"If all Democrats hang together ... they have the power to replace Justice Breyer in 2022 without one Republican vote in support," Graham said.
CONGRESS & COURTS・9 HOURS AGO

"Nearly 10 million children will be thrown back into or deeper into poverty this winter" if the child tax credit isn't renewed, the letter says.
PRESIDENTIAL ELECTION・18 HOURS AGO
Newsweek

"Perhaps this means some of our colleagues will miss out on lucrative investment opportunities. We don't care," the lawmakers said.
CONGRESS & COURTS・2 DAYS AGO
Business Insider

Bernie Sanders says a big tax break for the wealthy is out of the Biden spending bill, triggering pushback from moderates threatening to derail the entire package

"Democrats need to focus on the struggling working class, not giving more tax breaks to the wealthy," Sanders said. Other Democrats said not so fast.
VERMONT STATE・9 HOURS AGO
CNBC

Democratic donors aim to finance a primary challenge to Sen. Kyrsten Sinema as she votes against key party priorities. Some of those donors gave to her 2018 campaign, and in some cases signed a letter in which they suggested their money should be returned. Rep. Ruben Gallego, D-Ariz., has recently...
CONGRESS & COURTS・11 HOURS AGO

"March 1 is not a deadline for one thing or another," he said at a POLITICO event. What happened: Majority Leader Steny Hoyer took a pragmatic tone about the future of the Democrats' climate change and social spending bill during an interview with POLITICO on Tuesday, insisting the March 1 State of the Union address should be viewed as an artificial deadline.
CONGRESS & COURTS・1 DAY AGO
Newsweek

Democrats staked everything on a doomed effort to end the filibuster and pass voting legislation. The results were no surprise.
PRESIDENTIAL ELECTION・1 DAY AGO
Newsweek

A past Sinema donor said, "I have given up really trying to understand Sinema's motivations for the way she votes."
CONGRESS & COURTS・8 HOURS AGO
CNBC

Over 80 House and Senate members wrote a letter to the president urging his administration to release the memo outlining his authority to cancel student debt. The lawmakers, including Senate Majority Leader Chuck Schumer, D-N.Y. and Sen. Elizabeth Warren, D-Mass., also called on the president to immediately forgive $50,000 per borrower.
EDUCATION・12 HOURS AGO

‘Raising taxes on working families is the last thing we should do during a pandemic’: Senators press Biden to extend child tax credit

President Joe Biden said last week he’s “not sure” an expanded child tax credit will make a comeback as lawmakers debate a new version of his big social-spending package. Now, five Democratic senators are urging him to push for the payments anew. “Without the expanded credit, nearly...
INCOME TAX・11 HOURS AGO
Markets Insider

It's been 8 months since the Education Department wrote a memo on Biden's legal ability to cancel student debt. Democrats say it's time to release it.
U.S. POLITICS・12 HOURS AGO
The Independent

Supreme Court Justice Stephen Breyer’s impending retirement gives PresidentJoe Biden one of the most prized opportunities any president has: a chance to nominate a Supreme Court justice who will likely serve long after he has left the White House.But given that Democrats have only a 50-seat majority with Vice President Kamala Harris as the tiebreaker, many of them are probably already dreading how conservative Democratic Sens Joe Manchin of West Virginia and Kyrsten Sinema of Arizona would vote.Democrats especially can’t be too optimistic after Mr Manchin effectively killed Mr Biden’s proposed Build Back Better bill, while Ms Sinema opposed...
PRESIDENTIAL ELECTION・6 HOURS AGO
Newsweek

Eyes will be on the two moderate Democrats, who have opposed some of Biden's key legislative priorities and will be needed to confirm his Supreme Court nominee.
PRESIDENTIAL ELECTION・9 HOURS AGO

With Breyer retiring, Vermont politicians call for change in the nation’s highest court

Democrats stung by a series of election-year failures to deliver legislative wins for their most loyal voters may have been buoyed by the prospect that President Joe Biden will name the first Black woman to serve on the Supreme Court. Justice Stephen Breyer's pending retirement, confirmed by numerous sources on...
CONGRESS & COURTS・10 MINUTES AGO
Business Insider

Democrats are returning their attention to Biden's big spending bill after Manchin torpedoed it a month ago.
CONGRESS & COURTS・13 HOURS AGO