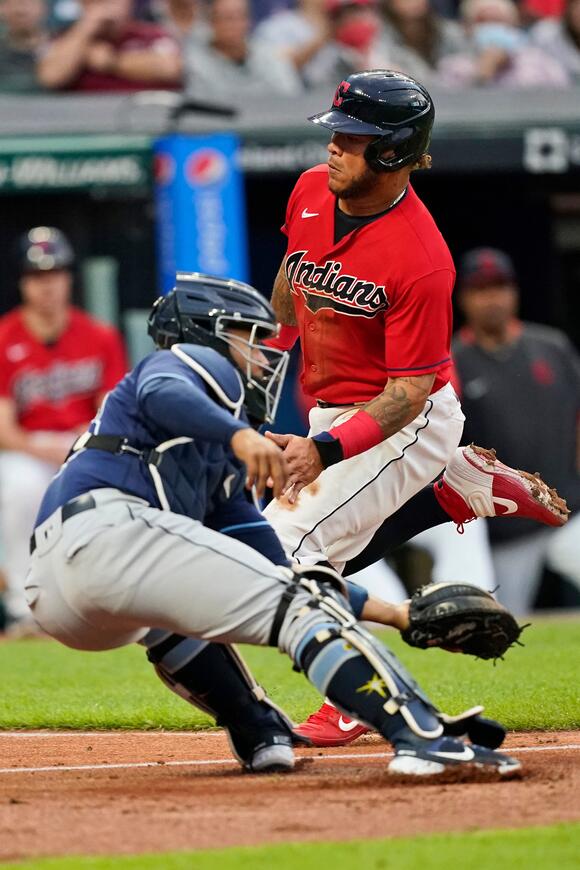 The Guardians traded outfielder Harold Ramirez to the Chicago Cubs and pitcher J.C. Mejia to the Milwaukee Brewers on Monday in two deals that were connected to the flurry of roster moves a few days ago.

Both Ramirez and Mejia were designated for assignment on Friday, along with five others, to make room for the 11 players the Guardians wanted to add to their 40-man roster ahead of the Rule 5 Draft protection deadline.

In 2021, his lone season in Cleveland, Ramirez hit .268 with a .703 OPS, seven home runs, 21 doubles and 41 RBI in 92 games. It wasn't nearly enough offensive production to make up for his defensive liabilities in the outfield, where he accrued minus-8 defensive runs saved. He was one of 10 American League outfielders to finish with minus-8 DRS or worse.

"Harold contributed so much to our team last year and at times hit in the middle of the order for us ... [but] we had to make some difficult decisions," president of baseball operations Chris Antonetti said Saturday. "We took off some players [from the 40-man roster] that we think are going to continue to contribute at the major league level and be productive.” 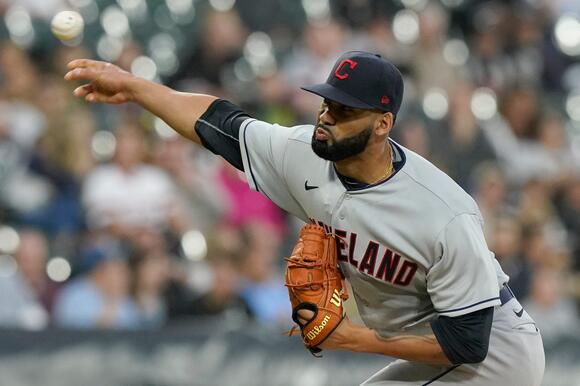 Mejia was pushed into a larger role because of injuries to three members of the starting rotation but struggled to find any consistency, finishing the season with an 8.25 ERA, a 6.15 FIP and 47 strikeouts in 52⅓ innings.

Outfielder Daniel Johnson and pitchers Justin Garza, Scott Moss, Kyle Nelson and Alex Young were all designated for assignment Friday in addition to Ramirez and Mejia.

Two of the seven players designated for assignment have now been traded, with five more waiting to hear their fates. If any of the five end up clearing waivers, Antonetti said the team would be open to a return. As the Guardians and other teams prepared to shuffle their 40-man rosters ahead of Friday's deadline, a good deal of planning went into how it all might play out in corresponding moves later on.

"Had some preliminary conversations over the course of the past week, as I mentioned, not only about players that we added to the roster but players we were removing," Antonetti said. "If we can find a trade partner for them, we will seek to do that. If not, then we would ask waivers on them next week and have a little more information of their status on Wednesday of next week.”

Although five pitchers were taken off the 40-man roster, three were added in prospects Cody Morris, Konnor Pilkington and Tobias Myers. The last was acquired in a trade with the Tampa Bay Rays and then added to the 40-man roster on Friday, which is now full. 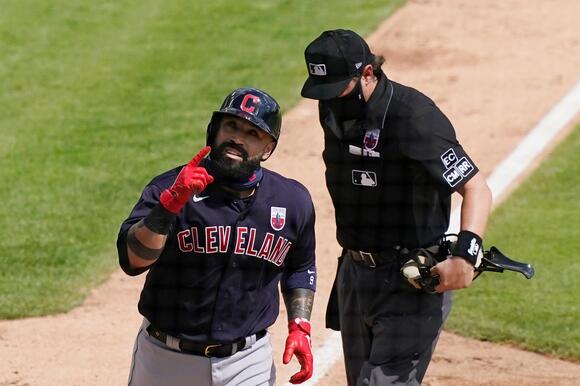 Catcher Sandy Leon was also signed Monday to a minor-league deal that includes in an invitation to big-league camp.

Leon, 32, spent the 2020 season with Cleveland and 2021 with the Miami Marlins. In 10 major league seasons, Leon has a career .183 average with a combined .596 OPS. Leon adds low-risk catching depth to the Guardians' 2022 camp after Roberto Perez's club option was declined. Austin Hedges and prospect Bryan Lavastida are the lone catchers on the Guardians' 40-man roster.

Ryan Lewis can be reached at rlewis@thebeaconjournal.com. Read more about the Guardians at www.beaconjournal.com/sports/cleveland-guardians. Follow him on Twitter at @ByRyanLewis.

While the Chicago Cubs wait for a new Collective Bargaining Agreement to be finalized between Major League Baseball and the Major League Baseball’s Players Association, there is no doubt that the team will need to be prepared for when they can resume their off-season activity and spending. Entering the...
NFL・1 DAY AGO
FanSided

The Chicago Cubs had a lot of memorable moments in 2003. Some were good and some were not so good. Unfortunately, baseball isn’t the only topic of conversation when discussing former Cubs pitcher Sergio Mitre. He was drafted in 2001 by the Cubs and played with them from 2003 to 2005.
CHICAGO, IL・5 DAYS AGO
670 The Score

Chicago Cubs: 3 decisions from 2021 that went up in smoke

It doesn’t take a genius to know the 2021 season didn’t play out in the fairy tale fashion the Chicago Cubs – or their fans – had hoped for. An early hot start was erased by not one, but two, double-digit losing streaks. So where did it all go wrong? There are plenty of culprits on that front, make no mistake.
MLB・2 HOURS AGO

From the Revere Brewers to Milwaukee Brewers, Former Revere Little Leaguer Signs With the MLB

When Donis Rodriguez moved to Revere from the Dominican Republic, he knew little about the city. However, he did know that he wanted to play baseball. “I was new to the city. I did not know where anything was. I knew no one, and I did not speak English. But that was not an obstacle for me to continue doing what I liked and that was playing baseball.” Donis, now 16 and living back in the Dominican Republic, certainly overcame all of those obstacles and is one of the newest members of the Milwaukee Brewers after signing a minor league contract with the team last week.
MLB・2 HOURS AGO
FanSided

With Major League Baseball and the Major League Baseball’s Players Association finally meeting in hopes of avoiding the cancellation of games due to the lockout, the attention has returned to the moves that the Chicago Cubs will need to make once the off-season resumes in order to be competitive in 2022.
MLB・4 HOURS AGO
FanSided

When I was a kid, I loved collecting baseball cards just as much as the next kid. I probably knew more about baseball from collecting cards than watching the actual games. I’m still pretty sure I gave my uncle a Ken Griffey Jr. card worth money for a Teenage Mutant Ninja Turtles Casey Jones action figure. Who does that to a kid?
MLB・9 HOURS AGO
USA TODAY

Alex Rodriguez, a three-time MVP whose 696 home runs trail only Barry Bonds, Hank Aaron and Babe Ruth, received just 34.3% of the votes in his debut.
MLB・21 HOURS AGO

Roger Clemens, the seven-time Cy Young winner, is in his final year of eligibility on the Hall of Fame ballot.
MLB・2 DAYS AGO
USA TODAY

David Ortiz needed just one swing to power his way into baseball’s Hall of Fame, narrowly punching his ticket to Cooperstown.
MLB・22 HOURS AGO
CBS Boston

BOSTON (CBS) — It wouldn’t be Hall of Fame season if a member of the baseball media wasn’t twisting himself into a pretzel for all the world to see. Enter Jack Curry of the Yankees’ broadcast network. Curry revealed his ballot on Tuesday, which is the day that the Baseball Hall of Fame will announce which players — if any — will earn enshrinement this year. Curry used eight of his allowable 10 votes this year, and for the first time in their 10 years of eligibility, Barry Bonds and Roger Clemens received his vote. The reason Curry hadn’t voted for Bonds and...
MLB・1 DAY AGO
Audacy

MLB Network’s Rob Parker did not vote for David Ortiz citing a gray area with PEDs, but he voted for Barry Bonds, Roger Clemens and Sammy Sosa, leading to one of his colleagues to call him out.
MLB・18 HOURS AGO

The Tigers spent about $225 million this offseason on Javy Baez, Eduardo Rodriguez and Tucker Barnhart. They’ll join a core of young talent in Detroit.
MLB・1 DAY AGO
Sportsnaut

From a pure on-field standpoint, Barry Bonds is considered the most-feared hitter in the modern history of Major League Baseball.
MLB・22 HOURS AGO
WFAN Sports Radio

Shortly after he was officially denied entry to the Baseball Hall of Fame on his tenth and final try, Roger Clemens issued a statement on Twitter verifying that he’s fine without the honor.
MLB・21 HOURS AGO
Audacy

Carter's fiery demeanor got him noticed by Blue Jays scouts. Now it's his humility off the field that's impacting the city of Toronto.
MLB・2 DAYS AGO
Sports Illustrated

The two sides met on Tuesday, marking the second consecutive day of discussions between the parties.
MLB・1 DAY AGO
Sportico

Barry Bonds, Roger Clemens, Todd Helton, David Ortiz, Andy Pettitte, Manny Ramirez, Alex Rodriguez, Scott Rolen, Curt Schilling, Sammy Sosa — My ballot for the National Baseball Hall of Fame Class of 2022. The Hall of Fame is now right where it wanted to be in 2014, when it changed the eligibility for players on the writer’s ballot from 15 years to 10. Barry Bonds, Roger Clemens and Sammy Sosa, stars of Major League Baseball’s so-called steroid era, are now off the Baseball Writers of America Association ballot five years before they otherwise would have been. For the 10th consecutive year, the...
MLB・19 HOURS AGO