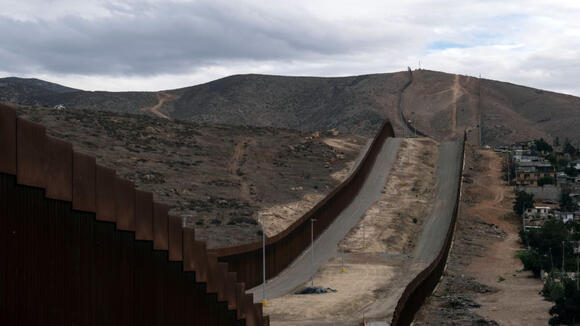 Mexican authorities have reported finding some 600 migrants on Friday hidden in two trailers traveling through the state of Veracruz, according to the country's National Migration Institute (INM). In a statement, the migration agency said that they discovered 145 women and 455 men in closed box cars that were heading north towards the US border. A substantial majority of the migrants -- around 400 people -- come from neighboring Guatemala, while significant numbers also come from Honduras, Nicaragua, the Dominican Republic and Bangladesh. Twelve countries in total are represented in the migrants' profiles, with El Salvador, Cuba, Venezuela, Ecuador, Ghana, India and Cameroon making up the remainder. The INM said they had started processing the people and would inform child protection agencies in the cases of unaccompanied minors and families, and will then decide whether to send them back to their home countries or give them the opportunity to remain in Mexico through a regularization procedure. In July, US Customs and Border Protection apprehended 212,672 people trying to cross the border between Mexico and the United States -- the highest number of arrests at the border in two decades. Between October 2020 and June 2021, more than 1 million migrants were arrested at the border. The crisis has prompted the US to run radio ads in Central America to try to deter people from migration. In the 2021 fiscal year, there were 557 deaths registered by US Border Patrol -- the highest number since records began and a significant increase from 254 deaths in 2020. Migration is very common from Central American countries like Honduras, where storms, violence, corruption, food insecurity, and a lack of economic opportunity have left many with no other choice. Elsewhere in Latin America, a crackdown on immigration policies accompanied by an exodus of Venezuelans and large numbers of Haitians moving through the continent have led to a migrant crisis in the region. In mid-2020, international migrants represented 2.6% of South America's whole population, a significant increase from the less than 1% registered in 2015, according to the International Organization for Migration (IOM).

MEXICO CITY, Jan 5 (Reuters) - The United States on Wednesday began returning migrants to the Mexican city of Tijuana in an restart of a Trump-era program that forces asylum seekers to wait for U.S. court hearings in Mexico, Mexican authorities and the U.N. migration agency said. The United States...
IMMIGRATION・13 DAYS AGO
abc17news.com

MEXICO CITY (AP) — Press groups say a Mexican journalist who criticized local authorities has died, several days after he was found badly wounded. José Luis Gamboa was the director of the online news site Inforegio, in the Gulf coast state of Veracruz. He had reportedly suffered stab wounds in what may have been a robbery. He died at a hospital in the state capital on Jan. 10, but his relatives were not informed until Jan. 14. Gamboa was the first journalist killed this year, but 48 journalists have been slain in Mexico since December 2018. Mexico is one of the most dangerous places for reporters outside active war zones.
PUBLIC SAFETY・1 DAY AGO
borderreport.com

TIJUANA (Border Report) — It’s been almost a year since the first migrants set up a campsite just south of the San Ysidro Port of Entry as a way to get in line should President Biden open the border. As months went by, most survived in donated tents...
IMMIGRATION・13 HOURS AGO
AFP

A photojournalist was shot dead Monday in Mexico's crime-plagued city of Tijuana bordering the United States, authorities said -- the latest such murder in one of the world's deadliest countries for reporters. More than 100 reporters have been murdered since 2000 in Mexico and only a fraction of the crimes have resulted in convictions. str-sem/dr/caw
PUBLIC SAFETY・1 DAY AGO

The US state department has released a new image of “El Chapito”, a son of former Mexican drug lord Joaquín “El Chapo” Guzmán, and again called for his arrest. An updated image was issued by the department last month following reports that it actually showed César Guzmán Salazar, a different son of El Chapo, according to Borderlandbeat.com.While the son who appeared in the press release is not involved in drug trafficking, US authorities said in a press release last month that Joaquín Guzmán-López was wanted for doing so.The state department’s bureau for International narcotics confirmed to The Independent on Tuesday that it...
PUBLIC SAFETY・17 HOURS AGO
Lexington Herald-Leader

For decades renowned Colombian author Gabriel García Márquez kept the public from knowing about an intimate aspect of his life: He had a daughter with a Mexican writer, with whom he had an extramarital affair in the early 1990s. The closely guarded secret was published by Colombian newspaper...
CELEBRITIES・1 DAY AGO
Daily Mail

An Indian farmer was left astonished yesterday after one of his goats gave birth to a kid with the 'face of a human' which neighbours described as a 'warning from God'. The goat belonging to farmer Shakar Das, 46, gave birth to several offspring in Gangapur village in the northeastern Indian state of Assam.
INDIA・21 DAYS AGO
MarketRealist

An average of over 500,000 new COVID-19 cases in the U.S. are reported every day, The New York Times reported on Jan. 5. The surge is primarily fueled by the omicron variant of the COVID-19 virus. How many vaccinated people have died from the omicron variant?. Article continues below advertisement.
PUBLIC HEALTH・13 DAYS AGO

At Gaoxin Hospital in Xi'an, China, a pregnant woman arrived suffering from abdominal pain. She waited outside for two hours.
PUBLIC HEALTH・12 DAYS AGO
Fortune

Never miss a story: Follow your favorite topics and authors to get a personalized email with the journalism that matters most to you. When news broke that an unvaccinated pregnant woman in Israel tested positive for both the coronavirus and the common flu at the same time earlier this week, it sent shock waves through the medical community and introduced a new term into the COVID-19 lexicon: “Flurona.”
LOS ANGELES, CA・12 DAYS AGO
hngn.com

Joe Biden sends its nuclear submarine to Taiwan with several nuclear warheads as its rift with China widens. The US Navy is trying to bolster the president's image after a loss in Afghanistan. The submarine went to a Pacific base in Guam during the weekend by the USS Nevada. Activity...
MILITARY・21 HOURS AGO
Business Insider

South Korea long maintained "strategic ambiguity" in its relations with China and with the US. But that era is over, with the Moon Jae-in government quietly but surely siding with Washington. But while it is siding with the US in most areas, it is not about to cut all ties...
FOREIGN POLICY・7 DAYS AGO
Business Insider

Well-known photojournalist in Tijuana gunned down outside his home

Independent photojournalist Margarito Martínez was assassinated this morning outside his Tijuana home. His body was found in the driver's seat of his car.
SAN DIEGO, CA・1 DAY AGO
americanmilitarynews.com

Chinese leader Xi Jinping threatened on Monday that a confrontation with China would only result in “catastrophic consequences.”. During a speech before the virtual-only Davos World Economic Forum, Xi said the world needs to move away from what he called a “Cold War mentality.”. “Our world today is...
CHINA・1 DAY AGO
Business Insider

China's claim of a Beijing man getting infected with Omicron through Canadian mail is 'extraordinary,' Canada's health minister says

The Beijing Center for Disease Control and Prevention on Monday said a Beijing resident had been infected with Omicron after handling a 22-page document sent from Canada.
PUBLIC HEALTH・1 DAY AGO
Insider

Hong Kong is mass-culling 2,000 hamsters and making owners hand over their pets amid fears that they might pass COVID-19 to people

People who bought hamsters from December 22 onwards are required to turn in their pets for culling, the SCMP reported.
PUBLIC HEALTH・1 DAY AGO
Business Insider

The cost of transporting fruit from California and Arizona to Canada climbed 25% last week, the CEO of Canadawide Fruits told Bloomberg on Monday.
AGRICULTURE・1 DAY AGO
iHeartRadio

"55 kg of heroin have been seized, one of the main seizures in recent years."
LAW ENFORCEMENT・2 DAYS AGO
AFP