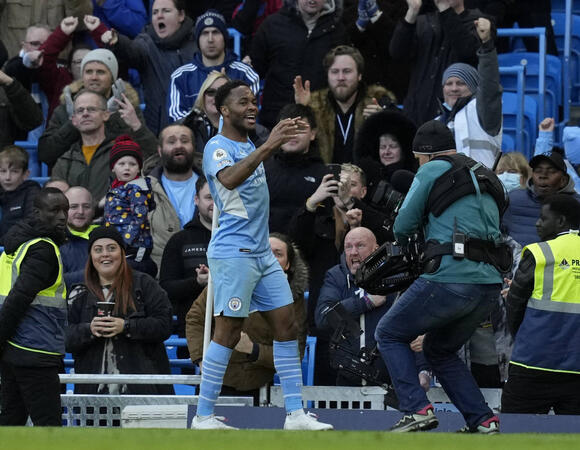 It is now two goals in his last two appearances for Raheem Sterling, with the winger looking to fight his way back into Pep Guardiola's first-team plans, after weeks of relative uncertainty.

Sterling's goal against Everton on Sunday afternoon was typical of the 26-year-old's lightning pace. Of course, Joao Cancelo's outside of the foot pass was sublime, but there was still a lot to do, and Sterling was the first to react and turn the ball home.

His celebration probably said it all - relief.

The England international is having a tough spell at a club where he has achieved so much - 117 goals and three Premier League titles later, Raheem Sterling has shown he still has plenty to give.

However, that has not stopped the transfer rumour mill from continuing to spin and Barcelona are still right at the centre of it.

According to Mundo Deportivo, as translated and relayed by Sport Witness, Raheem Sterling has 'asked' Manchester City to 'facilitate' a transfer to Barcelona in the January transfer window.

Pep Guardiola was asked, once again, asked about the links on Friday afternoon, with his response firm but fair.

Guardiola continued, "Don't ask me from now on until the transfer window is open, because I'm not going to answer them."

However, despite Pep Guardiola's comments, Mundo Deportivo claims the Catalan manager and Sterling have already held conversations regarding his 'frustrations' with game time, with the player reiterating his desire to sign for the La Liga giants.

Where this transfer saga goes next is anyone's guess, but it's likely we'll hear much more as the January window ticks ever closer.

Bernardo Silva was largely tipped to evolve as David Silva's successor at the Etihad Stadium when the 27-year-old completed a £43 million move to join Manchester City from AS Monaco off the back of a league-winning campaign in France. The Portuguese, who has been arguably Manchester City's best player...
PREMIER LEAGUE・2 DAYS AGO
The Guardian

Pep Guardiola believes record signing Jack Grealish delivered “by far” his best performance in a Manchester City shirt during Saturday’s 1-1 draw at Southampton Playmaker Grealish is yet to consistently hit top form for the Premier League leaders since arriving for £100million from boyhood club Aston Villa last summer.The England international, who has managed only two top-flight goals and a couple of assists this term, was unable to inspire City to victory on the south coast as their remarkable winning run ended at 12 games.He cut a frustrated figure at times and was involved in a first-half flash point with...
PREMIER LEAGUE・1 DAY AGO
The Independent

Liverpool moved to within nine points of Manchester City at the top of the Premier League table with an entertaining 3-1 win over Crystal Palace at Selhurst Park.Virgil van Dijk gave the visitors the lead in the eighth minute, thumping a bullet header beyond Vicente Guaita from an Andy Robertson corner. And Liverpool’s dominance was rewarded with a second shortly after the half hour mark when Robertson crossed for Alex Oxlade-Chamberlain to bring down and fire home at the back post.Palace finally got a foothold in the game towards the end of the first half and continued that urgency after...
PREMIER LEAGUE・1 DAY AGO

There is a strong argument to suggest that Kyle Walker has been the most consistent player in the Pep Guardiola era, since his big money move from Tottenham in the summer of 2017. The England international right-back is set for his 126th start in the Premier League against Southampton on...
PREMIER LEAGUE・2 DAYS AGO
The Independent

Manchester City travel to the south coast on Saturday evening to try and extent their lead at the top of the Premier League by beating Southampton.Saints held Pep Guardiola’s men to a goalless draw back in October but today’s visitors have been in scintillating form in recent months, winning their last 12 consecutive league fixtures and building up a lead of 11 points to second-placed Liverpool and 14 to Chelsea in third.Kevin De Bruyne’s superb curling finish was enough to secure victory over the Blues last time out, and the Belgian could start up front at St. Mary’s with Raheem...
PREMIER LEAGUE・2 DAYS AGO
CityXtra

On Friday, a flurry of reports from both Argentina and England claimed that Manchester City were in talks to sign Julian Alvarez from River Plate, with the 21-year-old out of contract in December. The centre-forward, who recorded 39 direct goal involvements in 46 appearances for River Plate in 2021, has...
PREMIER LEAGUE・2 DAYS AGO
goal.com

What a game that was from Diego Simeone's men, trailing 2-0 before scoring three goals in the second half – including two in stoppage time – to claim all three points. An epic, monumental comeback. Whew! Take a breather, everyone. Has this been the most Atletico Madrid game...
PREMIER LEAGUE・2 DAYS AGO

It has been reported over the course of the weekend, and into the new week, that Manchester City are set to announce the signing of Julian Alvarez from River Plate, for a fee in the region of £20 million. With Pep Guardiola’s side operating without the presence of a...
PREMIER LEAGUE・23 HOURS AGO
Daily Mail

At times, Pep Guardiola resembles King Cnut, protesting to the world that his team is not, in fact, infallible, the title race is never over in January (reader: sometimes it is) and that Premier League opponents are in fact decent sides rather than hapless victims for City to humiliate in a televisual entertainment fest.
PREMIER LEAGUE・2 DAYS AGO
Yardbarker

With Pep Guardiola’s contract at Manchester City set to run out in 2023, the million-dollar question remains, which manager will be the successor to the Spaniard after his departure. The Catalan coach has won ten trophies in his five full seasons at the Etihad Stadium, and looks on course...
PREMIER LEAGUE・1 DAY AGO

Manchester City were denied a 13th consecutive Premier League win as Southampton held on to claim a deserved point in a 1-1 draw at St Mary’s.Kyle Walker-Peters stunned the visitors when he finished off a well-worked move by curling home the opener for Ralph Hasenhuttl’s men with just seven minutes on the clock.It took City until the 65th minute to level through Aymeric Laporte, with both Kevin De Bruyne and Gabriel Jesus striking the woodwork as Pep Guardiola’s side searched in vain for a winner.The result leaves the reigning champions 12 points clear of second-placed Liverpool, albeit having played two...
PREMIER LEAGUE・2 DAYS AGO
CityXtra

While City were far from their best at St. Mary’s, a rare tough night at the office does not demand a meltdown, as the league leaders maintain a sizeable nine point-gap ahead of Liverpool in the Premier League table. Speaking after the Premier League champions’ recent fixture, Pep Guardiola...
PREMIER LEAGUE・1 DAY AGO
CityXtra

Pep Guardiola's side went into this afternoon's Premier League clash with the opportunity to extend their lead at the top of the table to 14 points. However, second place Liverpool do have two games in hand. It was the hosts who started the brightest, stretching City's backline, with Kyle Walker-Peters...
PREMIER LEAGUE・2 DAYS AGO
AFP

Aymeric Laporte spared Manchester City's blushes as the Premier League leaders were held to a 1-1 draw at Southampton, while Manchester United moved into fourth place after Marcus Rashford's last-gasp goal sealed a 1-0 win against West Ham on Saturday. Ferguson was unbeaten in three matches as caretaker boss against Chelsea, Manchester United and Arsenal before Carlo Ancelotti took charge just over two years ago.
PREMIER LEAGUE・2 DAYS AGO
CityXtra

Despite Joshua Wilson-Esbrand making just one appearance so far this season for Manchester City's first-team squad, the promising young left-back is held in high regard by the majority of the club's fanbase. This admiration comes as a result of his impressive debut against Wycombe Wanderers in the Carabao Cup earlier...
PREMIER LEAGUE・2 HOURS AGO
CityXtra

There certainly are not many clubs in world football that have a better collection and range of wingers than Manchester City at present. Raheem Sterling and Riyad Mahrez are undoubtedly world-class in their respective positions, while Phil Foden has emerged as one of the best young players in Europe as a left-winger, and Gabriel Jesus is enjoying a renaissance down the right flank.
PREMIER LEAGUE・18 HOURS AGO
CityXtra

Amid Manchester City’s ongoing search for a new striker following Sergio Aguero's departure last summer, Dusan Vlahovic has been heavily speculated with a potential move to the Etihad Stadium after refusing to extend his existing deal at the Artemio Franchi Stadium past 2023. Apart from being a lethal goalscorer,...
PREMIER LEAGUE・4 HOURS AGO