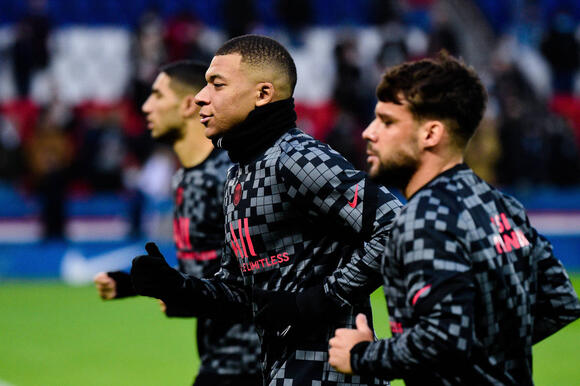 The Ligue 1 giants are expected to make the trip to the North-West of England on Tuesday afternoon, ahead of a decisive match at the top of Champions League Group A on Wednesday night.

Manchester City will secure a place in the knock-out stage of Europe's premier competition once again, should they manage to secure a victory against Mauricio Pochettino's side this week.

However, the French side will almost certainly be sweating over the availability of star forward Kylian Mbappe ahead of the game - following his absence from training on Monday morning.

According to the information of French media outlet RMC Sport, Kylian Mbappé was absent from training on Monday morning due to an illness - however, it is reported that the problem is 'nothing serious'.

While Mbappe was missing from the Paris squad's training session ahead of the match against Manchester City this week, there is nothing to suggest that the France star will not travel with the rest of the team at present.

One thing is for sure: Pep Guardiola will be fully focused on the task at hand, and not the potential for just one of PSG's superstar forwards to be missing from the clash at the Etihad Stadium.

As for Manchester City, they will be without Kevin De Bruyne for the game, after the Belgian international tested positive for Covid-19 last week. Ferran Torres will also be absent as he continues his recovery from a foot problem.

Jack Grealish remains a doubt, after returning from England duty with an injury and missing the Premier League match against Everton on Sunday afternoon - a game that saw City come out on top via

The title race is over now, apparently. You know, the one that ended a few weeks ago. Manchester City already looked like being crowned champions for a fourth time in five years before this twelfth consecutive league win. After it, it seems a nailed-on certainty. There is a faint and remote possibility of a challenge from Liverpool, now 14 points back but with two games in hand. This was a meeting of the top two, though, and it only reinforced the theory that there is in fact only a top one.That was demonstrated not so much by the result, a...
PREMIER LEAGUE・1 DAY AGO
The Independent

There is no questioning the fact that Ilkay Gundogan has been one of the best players in the world for over 12 months now, putting in a string of consistent performances under Pep Guardiola. Ending up as Manchester City’s top scorer in the 2020/21 Premier League season with 13 goals,...
PREMIER LEAGUE・2 DAYS AGO

WATCH: De Bruyne finish gives Man City deserving lead (US only) "Yesterday before training, he still had problems with his hip flexor," the Red Devils boss has said. "I had another conversation with him and we then decided that it doesn't make sense to take him on the journey here. Hopefully he can play on Wednesday.
PREMIER LEAGUE・1 DAY AGO
CityXtra

Ilkay Gundogan has made his name as one of the best midfielders of the modern generation after a trophy-laden spell at the Etihad Stadium since becoming Pep Guardiola's first capture at Manchester City in the summer of 2016. From bursting onto the scene with Borussia Dortmund to taking his game...
PREMIER LEAGUE・2 DAYS AGO
The Independent

Pep Guardiola has insisted that Manchester City have not been 'luckier' than other Premier League clubs with Covid-19, despite Thomas Tuchel’s belief that it has been a deciding factor in the title race.Ahead of Chelsea's visit to the Etihad for Saturday's lunchtime kick-off, Tuchel said that "the biggest difference" between his side and City is that the defending champions have "dealt better with injuries and the Covid situation"."Maybe it is lucky, maybe they do it better, but they have fewer injuries to key players, fewer days out and weeks where they miss them. They did not suffer from Covid like...
PREMIER LEAGUE・1 DAY AGO
Yardbarker

“Excellent in All Departments." - Pep Guardiola Heaps Praise on Thomas Tuchel Ahead of Man City's Clash With Chelsea

In September, Manchester City came, saw, and conquered Stamford Bridge with a statement 1-0 win - courtesy of a Gabriel Jesus winner. This time around, ahead of the Sky Blues clash against Chelsea at the Etihad Stadium on Saturday, the hosts have a sizeable 11 point gap over the visitors.
PREMIER LEAGUE・2 DAYS AGO

Manchester City can go at least 11 points clear at the top of the Premier League with a win over Thomas Tuchel's Chelsea side at the Etihad Stadium at the weekend, with Liverpool set to host Brentford on Sunday. On the eve of Manchester City’s FA Cup third-round tie against...
PREMIER LEAGUE・2 DAYS AGO
FanSided

Yesterday, a report from Telefoot sent many Real Madrid fans into a frenzy, perhaps even bringing back their memories of August 2021 when it seemed like Kylian Mbappe would join Los Merengues, only to realize all those reports of a transfer were premature. Telefoot’s Julien Maynard relayed that PSG and...
SOCCER・1 DAY AGO
The Independent

Kevin De Bruyne scored a brilliant winner as Premier League leaders Manchester City moved 13 points clear with a 1-0 victory over second-placed Chelsea on Saturday.The Belgian playmaker, who had an unhappy spell at Chelsea early in his career, curled beyond Kepa Arrizabalaga from distance to settle a tight contest at the Etihad Stadium with 20 minutes remaining.It was a moment of magic worthy of winning any game but was the least City deserved having dominated against the side that beat them in last season’s Champions League final.Blue is the colour! 💙#ManCity pic.twitter.com/816nfRAo0M— Manchester City (@ManCity) January 15, 2022The win...
PREMIER LEAGUE・1 DAY AGO
Absolute Chelsea

Manchester City midfielder Ilkay Gundogan has named N'Golo Kante as the hardest midfielder he has ever faced ahead of Chelsea's trip to Manchester on Saturday. The Blues travel north for the Premier League's early kick-off on the weekend, sitting ten points behind the league leaders and current champions. Taking to...
PREMIER LEAGUE・2 DAYS AGO

The Etihad Stadium plays host to the top of the table Premier League clash between Manchester City and Chelsea this afternoon. City are first in the league with Chelsea second coming into this game, but with completely different form in the competition. Chelsea will be hoping to end their poor run, but they will take inspiration from some promising displays in the Carabao Cup. Today’s match is Chelsea’s second against City in the league this season and their last chance to peg the reigning champions back in their pursuit of the title.Follow Man City vs Chelsea LIVECity will be...
PREMIER LEAGUE・1 DAY AGO
Absolute Chelsea

Chelsea have been handed a huge blow ahead of their clash against Manchester City in the Premier League on Saturday as Andreas Christensen has tested positive for Covid-19, confirms Thomas Tuchel. The Blues were without Thiago Silva and N'Golo Kante for clashes against Tottenham Hotspur and Chesterfield last week, with...
PREMIER LEAGUE・2 DAYS AGO
The Independent

Manchester City have gone 13 points clear in the Premier League as they defeated Chelsea 1-0 thanks to a superb Kevin De Bruyne strike.It was a game regarded as one Chelsea had to win as City are unlikely to drop many points for the rest of the season. But the Blues weren’t clinical enough in the final third.In the first half, Raheem Sterling was causing a lot of issues but Chelsea’s defence, particularly through Antonio Rudiger and Thiago Silva, held strong.Chelsea had dangerous counter attack but the final pass didn’t come off for the visitors angering manager Thomas Tuchel. The...
PREMIER LEAGUE・1 DAY AGO
The Guardian

It is the battle between first and second in the Premier League table on Saturday afternoon, as reigning champions and league leaders Manchester City go toe-to-toe against Chelsea at the Etihad Stadium. Pep Guardiola’s side have won 11 Premier League games on the trot, and after their professional 4-1 victory...
PREMIER LEAGUE・2 DAYS AGO
CityXtra

Last Thursday, Manchester City confirmed Pep Guardiola, Juanma Lillo, and seven first-team players were amongst the 21 personnel isolating for Covid-19 related reasons. The Catalan coach has since returned to the CFA after his period of self-isolation and is set to take charge of the team for their top-of-the-table clash with Thomas Tuchel's Chelsea on Saturday afternoon.
PREMIER LEAGUE・2 DAYS AGO
CityXtra

Since his arrival to the Premier League in 2016, Pep Guardiola has reigned supreme over English football by assembling one of the strongest teams in the history of the top-flight. Winning four Premier League titles, four Carabao Cups, an FA Cup and guiding the Etihad club to their first-ever Champions...
PREMIER LEAGUE・2 DAYS AGO
FanSided

After months of reprieve, Real Madrid fans are back to scrolling on their phones and seeing more constant, conflicting updates regarding Kylian Mbappe‘s future. Though the PSG forward can officially sign a pre-agreement to join Madrid in the summer 2022 transfer window, the star man is fully expected to avoid signing anything until at least the end of the Champions League tie against Real, out of respect for his current club.
UEFA・1 DAY AGO