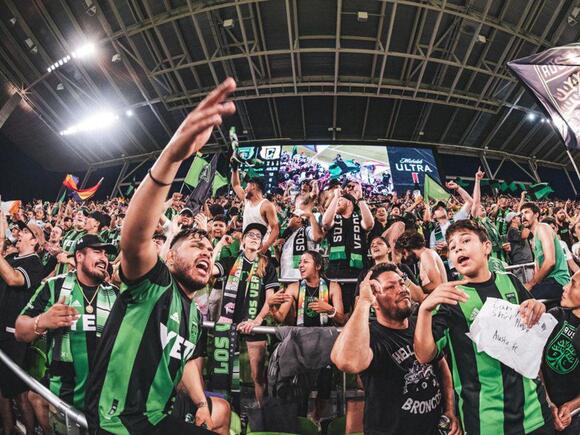 The now 1-year-old club has released its first 2022 opponent just weeks after its final match of 2021, announcing that it will play FC Cincinnati for its home opener at 5 p.m. on Saturday, Feb. 26.

The upcoming game could be a match made in heaven for the fledgling Austin FC—although the Verde and Black were 12th of 13 teams in the West in 2021, FC Cincinnati fared worse, earning just four wins to come in last in the Eastern Conference.

The Cincinnati matchup could be a chance for Austin to flex its new muscles early after recouping for its first offseason. While the team hasn't made big signing moves yet, it did exercise a permanent transfer option for left back Zan Kolmanic Nov. 19 after the young defender spent a year on loan with the club. Austin will also look for upcoming chances to bolster the roster this winter, including during the MLS SuperDraft in January 2022.

An early battle against Cincinnati could also be a cautionary tale for the Verde and Black: since its founding in 2019, the expansion team has never pushed past last place in the conference.

Austin, meanwhile, is looking to have a season with results that match its passionate fanbase this time around. The club sold out all of its 17 home matched in 2021, and on Monday, the team once again encouraged its fans to join the season ticket Waitlist Membership for presale access to the home opener.

The opening match will be regionally broadcast in English and Spanish. Single-match tickets will go on sale soon-to-be-announced shortly after the 2022 season schedule is released.

The Chicago Fire acquire Kacper Przybyłko from the Philadelphia Union, filling a big need at striker. But more moves are needed if they want Ezra Hendrickson’s ‘progressive possession’ to be successful.

The Chicago Fire kick off their new season in a little more than a month with plenty of work to be done if they hope to reach the Major League Soccer playoffs for the first time since 2017. But one of those needs might have been addressed. The Fire on Saturday acquired Polish striker Kacper Przybyłko from the Philadelphia Union for $1.15 million in allocation money split over two years. ...
MLS・21 HOURS AGO
All Bearcats

The back-to-back World Cup champion U.S. women's national soccer team has opened its January camp as its prepares for qualifying this summer for the 2023 tournament
AUSTIN, TX・1 DAY AGO

One of Charlotte FC’s earliest hired staff members will depart the Major League Soccer expansion club before the start of the team’s inaugural season. Two sources with knowledge of the move confirmed to The Observer on Thursday that technical director Marc Nicholls is leaving the organization for a similar position at Columbus Crew.
MLS・2 DAYS AGO
wbrc.com

BIRMINGHAM, Ala. (WBRC) - Birmingham Legion FC will welcome Atlanta United to Protective Stadium Sunday, February 20. The Major League Soccer club comes to the Magic City for a pre-season friendly. This match will mark the time Legion FC plays in Protective Stadium, their new home. “This exhibition is a...
MLS・2 DAYS AGO
CBS Boston

BOSTON (CBS) — New England Revolution goalkeeper has been on a rapid ascent in recent years, rising from an undrafted player in 2016 to the best keeper in MLS to becoming the potential starting goalkeeper for Team USA. Now, his career arc may be making another significant jump. According to Taylor Twellman, Arsenal have made a “strong bid” for Turner. 🚨🚨🚨🚨🚨 Breaking news!!@Arsenal have put in a strong bid for @headdturnerr from the @NERevolution today. What a great opportunity for both the player & franchise to further enhance their brand. What a great time to be a #NERevs supporter. #MLS — Taylor Twellman (@TaylorTwellman) January 20, 2022 The 27-year-old Turner has played 97 matches for the Revolution since 2018, earning Goalkeeper Of The Year honors in 2021. He was an All-Star in 2021, earning game MVP honors during his appearance. Turner also made his international debut in 2021, going 9-1-2 for Team USA and earning Best Goalkeeper and Best XI honors in the Concacaf Gold Cup.
MLS・2 DAYS AGO

Christian Fuchs loves the memories associated with shirts.  Spanning his 17-year career as a professional soccer player, the Charlotte FC defender estimates he has around 200 at his primary home in New York. Over 100 hang in his “man cave,” a space he credits his wife with creating, while the rest are in a closet. Why […] The post Exclusive: Charlotte FC’s Christian Fuchs explains why soccer jerseys matter so much appeared first on Axios Charlotte.
MLS・2 DAYS AGO
Sportsnaut

The Seattle Sounders signed defender Alex Roldan to a contract extension through 2024, rewarding the 2021 MLS All-Star who made
MLS・2 DAYS AGO